While the majority of coup plotters were tried and arrested, some of them fled to Greece and Germany. Germany, the founding member of the EU, and Greece, a country that knows well what a coup means, welcomed the military officers who had plotted and organized the attempted coup. 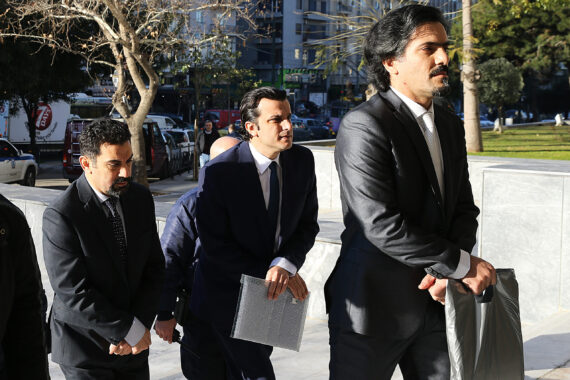 Fugitive Turkish soldiers are being escorted as they brought at Supreme Court of Greece, Areios Pagos, in Athens, Greece on January 13, 2017. Anadolu Agency

Between 1831 and 1967, Greece experienced 12 military coups and 8 coup attempts. Following the military coup staged by a group of colonels in 1967, throughout the junta regime that reigned for seven years, political parties were closed, intellectuals, journalists, and writers were jailed and tortured, and many unidentified murders were committed. Following the Turkish operation in Cyprus on July 20, 1974, and the loss of U.S. support, the junta regime declined dramatically and civilians eventually took over on July 23.

After democracy was introduced in Greece in 1974, the colonels who plotted the 1967 coup were tried and all received life sentences. Despite this, the country still underwent a coup attempt that was prevented in 1975. When the leader of the Panhellenic Socialist Movement (PASOK), Andreas Papandreou – who was also sentenced to nine years during the 1967 junta – came to power with a landslide victory in 1981, the first thing he done was establish a new system against the threat of military coups. He performed a sweeping purge in the Greek army since the military was still harboring a group with pro-coup mindsets. Papandreou also marked radical changes in the legislation of the military. Among these changes, all military officers, including private soldiers, were authorized to inform political authorities when they see any sign indicating the intention of a coup attempt. Officers that failed to inform authorities, even when they were to receive a suspicious order, were tried and received life sentences on the charges of staging or attempting a military coup. Papandreou was right. 30 years later, in November 2011, some 16 generals were discharged from the military on the grounds that the armed forces were plotting a coup.

During the time that the socialist leader’s political and legal battle against military coup attempts was ongoing, Turkey was being ruled by a junta regime that was declared after the military coup on September 12, 1980. Moments before the coup, the U.S. Embassy in Ankara told the CIA’s former Turkey chief Paul Henze, “Our boys did it!” During the rule of their “boys,” 650,000 people were detained in Turkey, 1,683.000 were blacklisted based on illegal recordings, 230,000 were tried in a total of 210,000 cases. More, capital punishment was demanded for 7000 people, 517 were sentenced to capital punishment and 50,000 people were executed. 98,804 were tried for being a member of an illegal group, 30,000 were discharged from duty, 14,000 were denaturalized and 30,000 fled abroad as political asylum seekers.

With a provisional article added on the new constitution, which was adopted with a referendum in an atmosphere of great pressure, the Chief of General Staff, Kenan Evren, who led the coup, became the president of Turkey. I remember hearing this expression as a child at the time: “Look at this, Greece has tried junta leaders and is now taking measures against possible coups, but the picture of a junta leader is hung on the wall of the Greek Consulate in Istanbul.”

During the following years, we continuously heard comparisons between Turkey and Greece, with people claiming that Turkey did not fight against juntas as Greece did and that the Turkish people appreciated Greece on this matter. Although not as early as Greece, 30 years after the coup, the AK Party made it possible to try Kenan Evren and other coup plotters. Unlike his predecessors, the AK Party leader and then Prime Minister Recep Tayyip Erdogan followed Papandreou’s lead in terms of demilitarization and took important steps to end the military tutelage regime in Turkey.

Having experienced three military coup attempts in the past, Turkey confronted yet another coup attempt on July 15, 2016. The attempted coup was orchestrated by Fetullah Gulen, a former religious clerk currently residing in the U.S. and was organized by Gulenist Terror Group (FETO) operatives, who infiltrated the Turkish military. The coup was repelled with the efforts of President Erdogan and the Turkish people. 248 people died and 2146 were injured during the insurrection. While the majority of coup plotters were tried and arrested, some of them fled to Greece and Germany. Germany, the founding member of the EU, and Greece, a country that knows well what a coup means, welcomed the military officers who had plotted and organized the attempted coup. A group of putschist military officers landed in Alexandroupoli, Greece, with a military helicopter following the July 15 coup attempt. Last month, the Greek Council of State decided to grant asylum to these eight officers based on the verdict that there is not enough competent evidence regarding the involvement of these individuals in the coup attempt and their affiliation with FETO. Shame on Greece, Germany, and especially, the U.S.