The “Love Army,” led by Jerome Jarre (@jeromejarre), made a call to President Recep Tayyip Erdogan for the Muslims in Rohingya this time first with the hashtag #LoveArmyForRohingya and later #ErdoganHelpRohingya on Twitter. 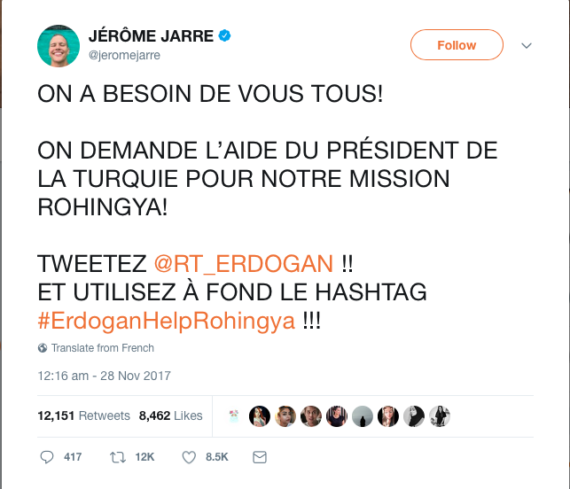 The “Love Army,” led by Jerome Jarre, made a call to President Recep Tayyip Erdogan for the Muslims in Rohingya this time first with the hashtag #LoveArmyForRohingya and later #ErdoganHelpRohingya on Twitter.

WE NEED YOUR HELP!
WE ARE ASKING IF THE TURKISH PRESIDENT CAN HELP US WITH OUR ROHINGYA MISSION!
PLEASE EVERYONE RETWEET AND USE THE HASHTAG #ErdoganHelpRohingya

Within hours Jarre’s tweets got thousands of likes and retweets.

Many famous French actors, artists and YouTube and social media stars along with other twitter users supported the campaign by tweeting under the hashtag #ErdoganHelpRohingya, some even tweeting in Turkish to get the attention of the Turkish President and officials.

He wrote, “Dear @jeromejarre,
We never turn down requests for assistance — wherever the people in need may be.

Jerome Jarre, the French social media phenomenon, initially known for his vines on social media is trying to draw attention on humanitarian crises all over the world with his followers and donators all together forming the Love Army as he calls it.

The Love Army has previously launched 2 other aid movements first in Somalia where 60 tons of food supplements in partnership with the Turkish Airlines were donated and second in Mexico to help the people after the earthquake.

Turkish authorities and aid agencies have been collecting donations for years in order to help Rohingya Muslims.

First lady Emine Erdogan had visited the Rohingya Muslims who fled the Myanmar genocide and took refuge in Bangladesh and distributed the most urgent nutrition, medicine and clothing materials from Turkey.

Then Prime Minister Erdogan urged the UN to take immediate action back in 2012.