President Macron might have convinced Trump to reconsider pulling U.S. troops out of Syria “too soon” but the central disconnect between fighting terrorism and larger strategic goals in the U.S. approach seems beyond a single administration’s preferences. 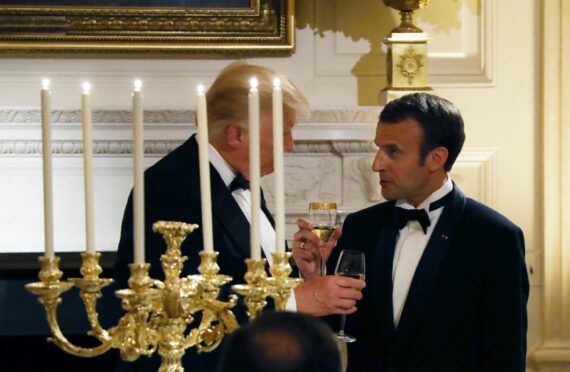 In his most recent visit to Washington, French President Emmanuel Macron appealed to President Trump to avoid leaving Syria too soon. Trump had already announced that the U.S. would withdraw from Syria “very soon” but U.S. military leaders immediately questioned the wisdom of pulling out. They warned against a premature pullout that would leave the ground to Russia and Iran as well as risk the return of Daesh. In a joint press conference with Macron, President Trump seemed to oscillate between bringing troops home and giving Iran an “open season to the Mediterranean.” In many ways, Trump’s statements summarize the inherent contradictions in U.S. policy in Syria. Ever since the U.S. has defined the defeat of Daesh as its main and increasingly exclusive goal in Syria, it has been unable to articulate a policy that reconciled its strategic goals and the domestic public opinion disfavoring a larger military commitment.

U.S. policy on Syria during the Obama administration suffered from the same contradiction between fighting terrorism and regional strategic goals. Obama emphasized working with local forces in fighting Daesh while prioritized the nuclear deal with Iran. Regularly invoking the danger of mission creep, Obama refused to articulate a comprehensive policy that would require American troop commitment to Syria. Using the PKK’s Syrian branch the YPG, the Obama administration brought great strains to the relationship with Turkey as well. Satisfying the domestic public opinion with a “light footprint” in Syria and striking a nuclear deal with Iran guided Obama’s refusal to commit the U.S. to a leadership role in ending the Syrian civil war.

President Trump benefited during the presidential campaign from a strong critique of the Iraq war and a harsh rhetoric on Daesh. He promised to use overwhelming firepower against Daesh and to avoid any new wars in the Middle East. This approach reflected the U.S. public opinion that agreed with the need to fight terrorism but disagreed with a larger involvement in the Middle East to address that same problem. In many ways, this fundamental contradiction that existed during the Obama administration remains under the Trump administration as well. While it seems straightforward to make the anti-terrorism argument, neither administration seems capable of making a convincing argument to the American public about the need for a comprehensive Middle East policy.

While President Obama sought a nuclear deal with Iran that would eventually lead to the normalization of relations between the U.S. and Iran, Trump has been adamant about abandoning the deal and pushing back against Iran. Obama made the nuclear deal a centerpiece of his Middle East policy but failed to address the Syrian Civil War, hoping he could somehow compartmentalize it from relations with Iran. The Trump administration has been talking about the “malign influence” of Iran in the region but a comprehensive policy is still lacking. The media reports that President Trump received assurances from his new National Security Advisor Bolton that he would not start new wars. It shows that President Trump is willing to push back against Iran but he wants it to stop short of war, an approach in line with the domestic public opinion.

President Macron might have convinced Trump to reconsider pulling U.S. troops out of Syria “too soon” but the central disconnect between fighting terrorism and larger strategic goals in the U.S. approach seems beyond a single administration’s preferences. The legacy of the Iraq war has had a strong role in the election of both Presidents Obama and Trump. The need to address international terrorism has defined both administrations’ Middle East policies. When it comes to crafting a strategy toward Iran, however, neither has defined a comprehensive vision that has been bought by the American public. It is going to take a lot more creativity than Macron’s advice and warnings to come up with a strategic vision that reconciles the U.S. strategic goals and domestic public opinion.