Masquerading the YPG Will Not Improve Turkey-US Relations

If the U.S. wants to have any real change on the ground in order to step forward for the discussed safe zone, the U.S. should first start by forbidding the entry of the YPG into Tal Abyad. If the U.S. fails to do this, it’s useless to talk about any safe zone. 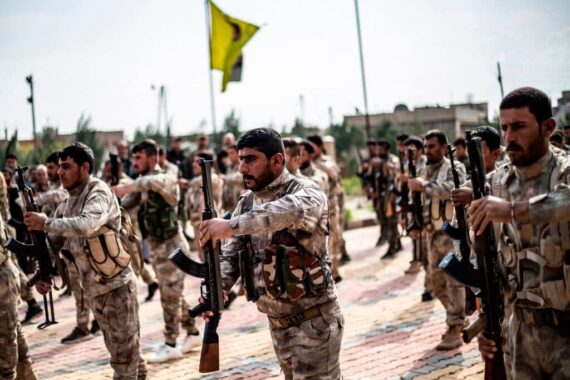 Members of the Kurdish-led Syrian Democratic Forces (SDF) attend the funeral of an Arab fighter in SDF who was killed the previous week in the eastern Deir Ezzor province, in northeastern Syrian Kurdish-majority city of Qamishli on April 10, 2019. Getty Images

Since Trump’s decision to withdraw troops from Syria immediately, Turkish and American delegates discussed this topic very intensively. However, the U.S. soon changed its mind from a full imminent withdrawal to a slow troop reduction. Turkey and the U.S. focused on the establishment of a safe-zone along the Turkish-Syrian border. Without going into other details like depth and territorial control, the Special Representative for Syria Engagement and the Special Envoy for the International Coalition, James Jeffrey, made it clear that the YPG will have to withdraw from the zone leaving the areas to other forces, which have not yet been decided. While negotiations continue, the U.S. has already started constructing facts. The YPG-dominated Syrian Democratic Forces began to change its name, again.

The Syrian Democratic Forces officially argued that, “The main goal of establishing these councils is to unify the military and security forces in the region, to involve local leaders in decision-making and to consolidate and institutionalize the institutional work within Syrian democratic forces by empowering and activating the military institutions within it,” proving the Turkish argument that locals are excluded from the decision-making process in YPG-held areas.

This new attempt to re-name the YPG once again is a desperate act as proven by the experience of the Manbij Military Council, which is involved in clashes with the Turkey-trained National Army and as shown by the Turkish insistence that the YPG has to withdraw from Manbij. Similarly, current attempts by the U.S. and the Syrian Democratic Forces to form alleged local councils in border towns to Turkey will neither ease Turkey’s concerns, nor have any meaningful change for Turkey-U.S. negotiations, except for useless debate, the U.S. winning some time and sabotaging negotiations.

Some experts in Washington, such as Nicholas A. Heras, labeled the formation of military councils as, “a milestone along the road toward achieving the US (not Turkish) vision for the so-called Safe Zone,” but even for the U.S. vision, this move is meaningless. What is currently being done is only the formation of an YPG-front group upon the YPG model – a make up with no real life implications apart from the production of new flags and banners. The alienation of the local people will just continue after this.

If the U.S. wants to have any real change on the ground in order to step forward for the discussed safe zone, the U.S. should first start by forbidding the entry of the YPG into Tal Abyad. If the U.S. fails to do this, it’s useless to talk about any safe zone.