Turkey has legitimate security concerns over insurgency inside its borders, U.S. Secretary of Defense Jim Mattis said Sunday, according to U.S. media reports. 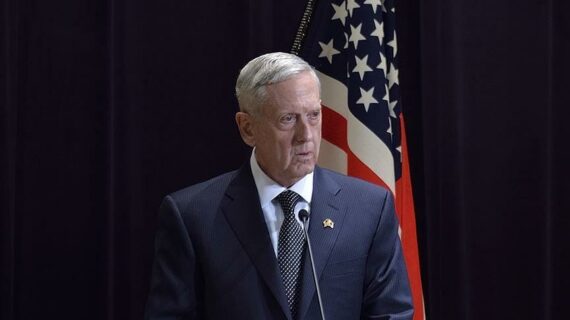 Turkey has legitimate security concerns over insurgency inside its borders, U.S. Secretary of Defense Jim Mattis said Sunday, according to U.S. media reports.

“Turkey is a NATO ally. It’s the only NATO country with an active insurgency inside its borders. And Turkey has legitimate security concerns,” Mattis told reporters in a plane headed for Asia.

His remarks came amid Turkey’s ongoing military operation against terror groups in the Afrin region.

Noting that the overall success against Daesh “does not remove many of Turkey’s concerns,” Mattis said it is “easy to understand” why Ankara is worried that the conflict will extend beyond the Syrian border.

”Turkey was candid,“ Mattis told reporters. “They warned us before they launched the aircraft that they were going to do it. We are very alert to it. Our top levels are engaged and we’re working through it.”

Turkey’s operation was carried out against the PKK/KCK/PYD-YPG and Daesh terrorist groups under the framework of Turkey’s rights based on international law, the UN Security Council’s decisions and self-defense rights under the UN charter.