Mazloum Kobani is among Turkey's most wanted terrorists and is placed on the Turkish Interior Ministry's Interpol red notice list. 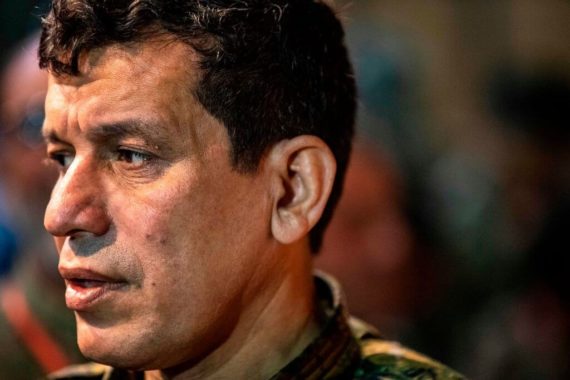 During Turkey’s Operation Peace Spring in the north of Syria, US President Donald Trump sent an unpleasant letter to Turkish President Recep Tayyip Erdoğan that was later returned to him during Erdoğan’s visit to the White House. But besides Trump’s undiplomatic language, he also made an offer to facilitate negotiations between Turkey and a so-called “General” on the Northern Syrian issue. However, there was a problem. The person Trump referred to as a “General”, was actually a wanted terrorist by Turkey on Interpol’s red notice list and the US relationship with Kobani has become a sore point Turkish-US relation

After Kobani’s name was mentioned alongside the other European politicians, Turkish President Erdoğan strongly took issue to the fact that Mazloum Kobani is terrorist wanted by Turkey. “Now we are at a point that some European countries such as France and Germany are negotiating with leaders of this terrorist organization. Again, some American authorities discuss with them. And in the face of these developments, we ask them ‘What is this situation?’ On the one hand, we talk about counter-terrorism, on the other, unfortunately, you open your doors to them and sit around the table with them. You even sent their letter as an addition to your letter” he told in a press interview.

Turkish President Erdoğan also said that Washington has to hand over Kobani to Turkey according to international law. “We have an extradition agreement. The USA has to give this man to us. Because this is the requirement of ‘wanted by the red notice’ he said.

Who is Mazloum Kobani?

Ferhat Abdi Şahin, who is better known by the adopted name of Mazloum Kobani and also as Mazloum Abdi, or by the nom de guerre Şahin Cilo, was born in Afrin, Syria in 1967. Despite a lack of information about his early life, sources say that he met with the so-called leader of the PKK Abdullah Ocalan when he was a child. It was during Ocalan’s years in Syria that the bond between them was said to have grown. Because of his close relationship with Ocalan, Kobani is considered to be Ocalan’s spiritual son.

According to sources, in 1990, when Kobani was 23 years old, he joined the PKK. From 1991-1996, he worked as a so-called Cilo Region Manager in Turkey’s Hakkari province. Kobani was responsible for the 22 August 1996 rocket attack that killed five people and wounded 11 others in Hakkari’s Şemdinli province. He was also responsible for the 8 November 1996 rocket attack that killed 17 people and wounded eight other at Hakkari’s Çukurca Province.

From 1997 to 2003, he was assigned as the PKK’s Europe Manager. In these years, he established the PKK’s Europe organizational scheme. He described this period as ‘political works’ during some interviews. Sources say that during this period he made a lot of connections with governmental institutions in the name of the PKK.

Besides his ‘political works’ in Europe, he also organized some activities such as festivals and camps mainly in the Netherlands to promote the PKK.

When Ocalan was captured at Kenya in 1999, Kobani was living in Europe. After 2003, he returned to Syria and according to Euronews he was imprisoned by the Syrian Government on five occasions and until 2009 he spent most of his time in prison.

In 2013, during the early years of the Syrian civil war, he began to work for the YPG as a so-called special forces manager and individual responsible for intelligence. It was during these years that Daesh began to strengthen in Syria and despite Turkey’s objections, the US decided to collaborate with the YPG with the purpose of defeating the Daesh.

In 2018, after Daesh was defeated, the US administration began to refer to Mazloum Kobani as ‘General Mazloum’. Particularly after the US Defense Ministry Spokesman Col. Robert Manning first referred to him as ‘General’ and argued that the US would continue to help the YPG as long as they fight against Daesh. The usage of the term ‘General’ was condemned by Turkey. After Manning’s statement, Turkish Foreign Ministry Spokesman Hami Soylu gave a press brief about the situation saying “the Pentagon Spokesman spoke nonsense on Afrin matter”.

When Turkish President Erdoğan met with US President Trump in the White House this November, a month after Turkey’s Operation Peace Spring, the Turkish delegation showed a short documentary about Kobani to US officials. In the documentary Kobani was shown to have “cost of the life of 313 Turkish security forces, honourable men and women whose sole duty and purpose was to protect and serve their people. He also killed five civilians during attacks on 29 police stations between 1991 and 1995. His preferred modus operandi, a method all too familiar to our fellow audience: Suicide.”

Following this crucial meeting that some Republican Senators also attended, some specialists commented about Kobani’s possible Washington trip. Luke Coffey, a foreign policy expert at the Heritage Foundation, a conservative policy think tank, was one of them. “Ferhat Abdi Şahin (aka Mazloum Kobanê) should NEVER be allowed to step foot on American soil” he said on his verified twitter account. He also made a special statement on Turkey’s state television TRT at beginning of Operation Peace Spring. “To defeat a terrorist organization by collaborating with another terrorist organization is a great insincerity. Entirely meaningless… If the citizens of the USA knew that the taxes that they paid to the government transferred to the YPG, which is an arm of the Neo Marxist PKK in Syria, they would not like this” he said.

After these developments Turkey’s Communications Director İbrahim Kalın wrote an article about the attitude of American politicians towards Kobani’s possible Washington visit. “Why would U.S. lawmakers roll out the red carpet for the top commander of a terrorist group, who is the subject of an Interpol Red Notice? The senators are extending an invitation to Şahin due to his role as the head of the YPG, which the U.S. has chosen to support as part of its counterterrorism strategy in Syria. This decision is riddled with too many contradictions to list. This invitation not only damages Turkish-American relations, but also constitutes a potential crime under U.S. law, given the YPG’s ties with the PKK.” he stressed.

“The Turkish public will not forget or forgive those who invited Şahin to the U.S. in order to legitimize him. Our NATO ally’s efforts to glorify a terror organization’s leader will be etched in our memory for many years. Şahin’s invitation to the U.S. will create a lasting wound in the hearts and minds of thousands of innocent Turkish families that have lost their loved ones” Kalın also emphasized.

Ahmet Hakan, a Turkish Journalist from Hurriyet Daily commented on the Kobani’s situation after the Trump- Erdoğan meeting. In his opinion the Kobani video that was shown to the US officials ended Kobani’s positive reputation. He also noted that Turkish journalists President Erdoğan watched the Kobani video together with President Erdoğan after the significant meeting. He noted that “having watched the video, we turned our sight to President Erdoğan, who told us: ‘I got Trump and the senators to watch this. I saw that Trump was influenced by the video’”.

After this diplomatic movement, there is still no clear consensus between Ankara and Washington on the issue of Mazloum Kobani. Following the meeting in the White House, international media has stressed that Erdoğan strengthened his hand against Trump. In particular, CNN International’s White House correspondent Kevin Liptak wrote an Opinion piece about the meeting entitled “Trump declares himself a ‘big fan’ of Turkey’s strongman leader Erdoğan,” and writing that “Erdoğan isn’t the only global strongman to have caught Trump’s attention. But no leader has appeared to get what he wants from Trump quite like Erdoğan.”

Also Read
Why Russia Protects the YPG in Syria