Meanderings on the Road to Presidency: Ince's Calculations and Miscalculations

The CHP should try to clarify what the party’s main purpose is in the short and long-term and whether there is any enthusiasm regarding the local elections. 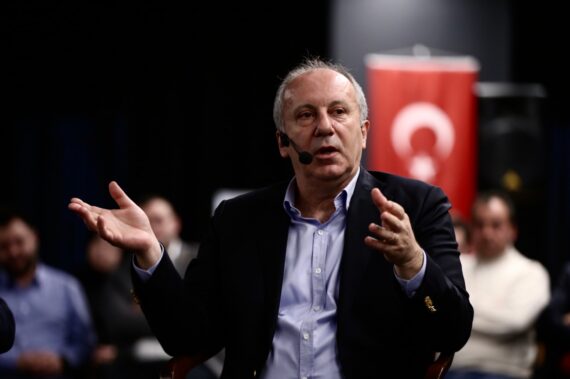 On September 20, 2018, that is to say, three months subsequent to the parliamentary and presidential elections in Turkey, the presidential candidate of the opposition party, the left-secular CHP, Muharrem Ince, was asked whether he will run for mayor in Istanbul’s Metropolitan Municipality in the upcoming local elections in March 2019. One should be aware that Istanbul is regarded as a micro election platform representing all Turkey. Interestingly, Ince said, “I want to run for presidency as the chairperson of the CHP,” that is to say, he rejected any efforts or even unlikely offers to run as a mayor candidate. Well, since that date, some incidents have occurred and inner-party structures have changed. However, the CHP’s chairperson remained the same. Kemal Kilicdaroglu, who has been the party’s chair since 2010 right after a video leak targeting the party’s former leader Deniz Baykal, retained his seat.

In a recent panel held this month, Muharrem Ince stated that he’s still aiming for the position of presidency. Ince answered a question based on the Adana Metro’s financial debt and stated, “If we [the CHP] win the municipality in Adana, Mersin, Bursa, and Ankara, and in Istanbul, the presidential and parliamentary elections will be held earlier… and I will the President of the Republic. Thus [local] problems can be solved easier.” The Turkish media and rational political circles commented on these statements as utopic plans, but some issues are striking.

Even though Muharrem Ince does not have any chance in challenging the party’s chair, it’s interesting that he is considering a leading role in Turkish politics. But despite these facts, Ince is aiming for snap elections if the CHP gains a success during the local elections in March and also seems to have the expectation that he will accede to the throne of party chair if the CHP loses the election.

The CHP should try to clarify what the party’s main purpose is in the short and long-term and whether there is any enthusiasm regarding the local elections.

Both expectations are not only conflicting but also unrealistic. Let me explain why.

Firstly, it’s very unlikely that the CHP will gain success during these elections by broadening its traditional electorate and winning the votes of the conservatives. However, there are so many districts where no CHP candidate has yet been announced. This delay, or even failure, caused an image of an unplanned and uncoordinated election campaign. Furthermore, the party’s base is actually frustrated due to the ongoing cold war between Ince and Kilicdaroglu in regards to party leadership. Kilicdaroglu insists on not giving up chairmanship to a “new” face, who is actually also a very old one, and is heavily criticized for his actions. Yet due to the missing democratic party mechanisms, the will of the party’s base is not implemented.

Thus, it’s actually also a positive step that the CHP’s candidate for Istanbul has preferred a positive discourse during his campaign. He even visited President Erdogan at the presidential complex in Ankara, while his party’s leadership nowadays is absurdly questioning the president’s legitimacy. But it’s exactly this imbalance and signs of insincerity that does not find any reflection in the hearts and minds of Turkish voters. People in Turkey does not take the CHP’s similar efforts as sincere moves due to the lack of credibility based on its contemporary and previous behaviors.

Do Turkish voters take the efforts by CHP’s Istanbul candidate as sincere moves such as adopting a positive discourse during the campaign or visiting President Erdoğan? Well, the CHP lacks credibility as its past and present behaviors illustrate.

Ince has also pointed out to snap elections, where will allegedly be a presidential candidate. However, one should not confuse some crucial issues. It’s not a realistic notion to expect snap elections due to the alleged success in some municipalities. In addition to this, it’s quite interesting that the CHP has any expectation of winning any potential parliamentary or presidential elections, while during the recent election 6 months ago, the party suffered a great loss. Under these conditions, the mood to challenge the governing party and its leader does not sound realistic.

The second issue that Ince plans is based on the fact that the CHP will only be successful in its “traditional circles,” while there are no actual and realistic potentials of winning in municipalities such as Istanbul or Ankara. And under these circumstances, Ince once again has the ambition to challenge chairman Kilicdaroglu to step down. But one has to keep in mind that even after a likely miserable election result for the CHP, Kilicdaroglu will not give up on his seat. This is very obviously for people used to Turkish politics.

Nevertheless, despite the several unlikely ambitions of Muharrem Ince, one striking issue is the fact that he is indirectly accepting Turkey’s new system of government, namely, the presidential system. There are actually no wishes or statements of primary importance by Ince – contrary to the CHP chair and other opposition politicians – concerning the return to the parliamentary system. It seems that all in all, at least in the short-run, they are fine with the new system’s sole executive organ, the presidency. And options that he is just aiming the presidency in order to return to the parliamentary system in the long-run does not seem convincing. The CHP leadership needs to eventually clarify what the party’s main purpose is in the short and long-term and whether there is any enthusiasm regarding the local elections.