Rules of international politics are often heartbreaking. The Syrian civil war has been an instance where the world has witnessed the ruthlessness of the game once again. The notion of justice is often disregarded and millions are left in resentment. Syrian people received no serious help while the regime was staunchly supported by revisionists and saved from utter collapse. 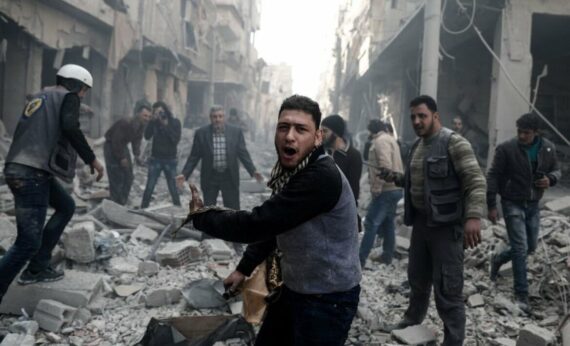 It has been six years since the uprising in Syria has begun. When protests met with a brutal response from the regime, the process quickly became a full-fledged civil war. From 2011 onwards there has been many twists and turns in the conflict and many atrocities were committed. Civilians were killed on a mass scale, millions of homes were destroyed, war crimes have been committed on more occasions than one can count. Year after year, Syrians hoped that the world would hear them and come to their help. Yet, nothing would encourage ‘the world’ to step in decisively and put an end to the injustice. The help never came. Quite the contrary, some nations opted to weigh in on the side of the regime and the gains of the opposition were reversed quickly.

It is very hard to perceive how we got here in Syria and, why does not this brutal war end despite widespread repulsion by the international community and endless outcries of the Syrian people. It makes one think that the world is increasingly becoming a place where criminals, be they individuals or states, get away with their wrongdoings. Yet, the world has always been this sort of a place. John Mearsheimer, an American professor of political science, says “The sad fact is that international politics has always been a ruthless and dangerous business, and it is likely to remain that way”.

The History of the Peloponnesian War, the seminal work of Thucydides which is considered to be one of the first and best examples of both history and international relations might help us understand the basic principles of the world we live in better. The Melian Dialogue in the book is a part of the negotiations between the representatives of Athens and Melos. The piece is among the very first realist writings. Faced with the Athenian siege, the representatives of Melos make pleas of justice and morality. In response, Athenians say “the strong do what they can and the weak suffer what they must”. Granted it is a morally unacceptable statement, the world still operates that way.

The anarchical nature of international politics makes states behave in a selfish way. They make their decisions to increase their security and further their interests. Helping out to other nations without an obvious interest can either be called an anomaly in the system which probably could be explained with ulterior motives or a luxury that is not perceived to be too risky. Power politics necessitates states to be excessively simple in their analysis. States consider the consequences of their actions in terms of their relative positions at the end. Seemingly, delivering real help to Syrians by putting in real effort would not further states’ interests. Since we presume that we are live in a ‘civilized world’, in which leaders do not abstain from issuing condemnations but, there is no help from the world beyond the lip service.

We spend too much of our time and energy to invoke other states or international institutions to pity and hopefully take action. Yet, international politics does not work that way. Endless efforts to raise awareness about the plight of Palestinians bore no fruit. Conversely, the Zionist appeals to the power base with promise of financial support to war efforts of Allied powers ended up in the Balfour Declaration. Without offering an interest in return, no help will come from the world.

The preservation of the balance of power would be the interest that would incite the world powers, primarily the US, to help Syrians. However, the Obama administration failed to recognize the US interest in the balance of power when it signaled that the Russian entry to the war in Syria would go without a response. The Russian decision to intervene in 2015 is one of the biggest reasons for the prolongation of the Syrian civil war. Under the pretext of the regime’s demand for help against ‘the terrorists’, Russia brought big guns into the conflict. Its aerial support for the Assad regime caused the downfall of the opposition. Under the protection of the Russian shelling, the regime advanced as far as Aleppo.

International systems are secure the most when actors understand the rules and consequences of their actions. It requires principal actors to show that they are serious in upholding the international order.
The perceived justice in the international system and the reason of the adherence to the rules is the fear of a backlash from the principal actors. If it is revealed that proponents of the current order do not have the stomach to stand up against the violations of the spoken or unspoken rules, revisionists understand that they can go unpunished and start to disrupt the order where they can. After World War I, the unwillingness of the Allies to tackle the Japanese and German aggression in its early phases, ended up in the collapse of the international order in the worst way possible.

The war in Ukraine was a terrible test for the US in that sense. The US inaction and lack of resolve resulted in the annexation of Crimea. When Russia started bombing Syria in 2015, it clearly expected little reaction from the rest of the world aside from verbal protests. It happened exactly that way. Russia gained more ground in the Middle East, expanded its bases in the Eastern Mediterranean and became a significant military actor there.

Rules of international politics are often heartbreaking. The Syrian civil war has been an instance where the world has witnessed the ruthlessness of the game once again. The notion of justice is often disregarded and millions are left in resentment. Syrian people received no serious help while the regime was staunchly supported by revisionists and saved from utter collapse. The US and other adherents of international order gave a free hand to Russia in Syria at the expense of the status quo for stepping in was not in their immediate interest. Had they observed history more closely, they would know the irreversible results of taking the easy way out in the long term. The pillars of international order have already begun to crack.