Mercenaries in Karabakh: Who They Are and How They Got There

Many reports indicate that Armenia relied on the help of mercenary groups from various countries including the PKK terrorist organization members. 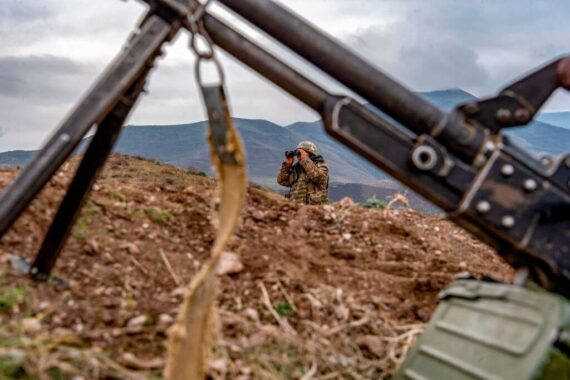 An Armenian soldier looks through binoculars during a patrol at the check point nearby a demarcation line outside Askeran on November 21, 2020, as Azerbaijani troops moved the day before into the Aghdam district bordering Nagorno-Karabakh. Photo by Andrey Borodulin/AFP via Getty Images

On September 27, 2020, responding to constant shelling of its villages and cities, the Republic of Azerbaijan began military operations in Karabakh. Within 44 days of the military campaign, the Azerbaijani army was able to inflict a heavy defeat on Armenia and Karabakh separatists, liberating several occupied territories. Based on the peace agreement signed by the Azerbaijani president, the Armenian prime minister, and the Russian president, hostilities ended on November 10, while Armenia withdrew its forces from three more occupied territories. During the conflict, there were many allegations of Armenia using mercenaries from various countries. Several reports and articles indicated that Yerevan relied on the help of various mercenary groups including the PKK terrorist organization. This opinion article will elaborate on these claims and shed light on the use of mercenaries in Karabakh.

The first report on Armenian use of mercenaries in Karabakh came from Russian journalist Ilya Azar in the newspaper Novaya Gazeta. He was the first to report on foreign mercenaries in Karabakh fighting for the Armenian side. In his article, he interviewed French citizen Artur Oganisyan, who came to Karabakh to fight on the Armenian side. After the interview, Azar was expelled from Karabakh. Reuters also interviewed Lebanese-Armenians fighting in the war and claimed that there are dozens of mercenaries coming from Beirut to fight in Karabakh against Azerbaijan.

The Azerbaijani media claimed that nationals of Greece, Spain, France, Canada, Lebanon, Syria, Georgia, and Russia came to Karabakh as mercenaries to support Armenia. Notorious Abkhazian Armenians who were fighting against the Georgian government, also showed up in Karabakh to help separatists. Mercenaries fighting for separatists in the region is not a new phenomenon. Even in the First Nagorno-Karabakh War, in 1991, mercenaries from the U.S., Lebanon, and Syria fought, including famous Armenian Monte Melkonyan, who is on Azerbaijan’s list of wanted terrorists.

The PKK in Karabakh

For a long time, experts in international relations have warned that non-recognized territories can become rogue states, and therefore sources of terrorism and criminal activities. These territories are de facto independent but not bound by any international treaties. They have their own armies, law enforcement, and political institutions, but lack financial viability which may force them to earn money through weapons sales, drug trafficking, and hosting insurgent training camps. Karabakh, for example, was one of the most militarized areas in the world. That safe haven attracted members of the PKK terrorist organization as well. Discussions of relocating some PKK groups to Karabakh started in the early 2000s. Karabakh separatists also began a process of settling Armenians, mostly from Syria and Lebanon, in Azerbaijani occupied territories.

The PKK’s decision to move some of its groups to Karabakh was a pragmatic choice for both sides. Karabakh is the only territory in the Middle East and the Caucasus where Turkey seemed less likely to engage in military action. Most of the countries in the region would hardly risk hosting PKK members for fear of Turkey’s military wrath. Even for Armenia, it would be suicidal to establish PKK camps on its territory. Yerevan would need to give explanations to the international community and could face sanctions for doing so. But Karabakh is a different story – the Turkish army was unlikely to chase PKK terrorists there. Any Turkish military activity in that area would involve the Armenian troops deployed in Nagorno-Karabakh. Armenian participation in a conflict would automatically bring Russia into it as the guarantor of the security of its southern ally. Thus, for many years, this territory was a safe haven for PKK groups.

Armenian soldier Albert Mikaelyan, captured by the Azerbaijani army during the recent military operations, stated during a press conference that while serving in an anti-tank unit, Mikaelyan noticed the presence of Kurdish-speaking mercenaries in the barracks, up to 1,500 of them. “They get paid $600. They are divided into teams of 10-15. They have been learning local conditions and preparing for deployment to the battlefield,” Mikaelyan added. Meanwhile, the Azerbaijani president’s aide, Hikmat Hajiyev, stated that Armenia is using the PKK terrorists on the front lines in Upper Karabakh. He expressed concerns about the use of the PKK in Karabakh and mentioned that there are terrorists in the ranks of the Armenian armed forces. Essentially, they were deployed on the front line of the Armenian armed forces. In a statement, Turkish President Recep Erdogan noted the presence of 2,000 PKK terrorists fighting alongside Armenia against Azerbaijan in Karabakh.

Armenian soldier Albert Mikaelyan noticed the presence of Kurdish-speaking mercenaries in the barracks, up to 1,500 of them.

Reportedly, Armenia transported most of these terrorists from Suleymaniyah, a stronghold of the PKK in Iraq. There were several flights from this Iraqi city to Yerevan before and during the recent military confrontations. Meanwhile, a separate group of YPG militants, regarded by many as the Syrian wing of the PKK, were sent to Nagorno-Karabakh from the Qamishli region on the Syrian-Iraqi borders. Azerbaijan, in turn, reported that dozens of PKK terrorists were killed in Karabakh during the military operations.

Despite the Armenian reliance on mercenaries, they were hardly able to change the course of the war. The Armenian side expected that the war would start and continue in a traditional way, using conventional weapons and tactics. Instead, Azerbaijan relied on technology, completely neutralizing the Armenian competitive advantage of using mercenaries. Thus, by the end of the military operation, Armenians suffered heavy casualties mostly caused by Azerbaijani armed drones and artillery attacks.

The biggest surprise for Azerbaijan during the conflict was the unanimous support for Armenian separatists from countries like France and Greece. Moreover, despite constant warnings, Russia did not block Russian citizens from going to Armenia and fighting in Karabakh States showing no effort in preventing the movement of mercenaries unfortunately overshadowed initiatives for peace.

At the same time, the use of mercenaries in such conflicts negatively affects the host countries. These Armenians from Russia, Lebanon, Syria, and Greece will return to their countries having acquired military training. They may use their skills against their host countries as was the case with Saudi mujahadeens who came back from the Afghan War in 1979-1989. The international community should have strict measures against mercenaries and countries supporting them as these actions undermine and ultimately destroy regional security.

Dr. Anar Valiyev is Associate Professor at ADA University and Jean Monnet Chair of European Studies. His areas of expertise are public policy of post-Soviet republics; democracy and governance; urban development and planning.