Military activity has started in Manbij after US withdrawal

News agencies reported yesterday that the Syrian regime is dispatching forces and equipment to the village of Arimah, 25 km west of Manbij. 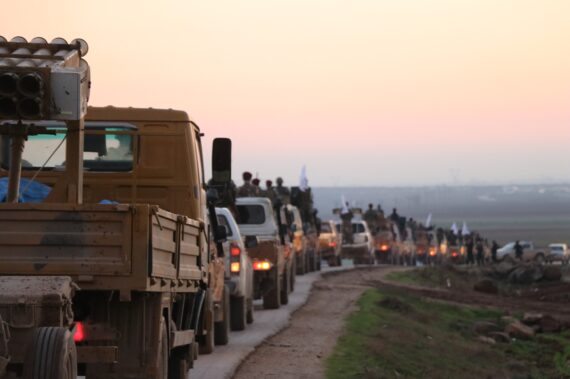 Heavy armed land and armoured vehicles belonging to Hamza division affiliated with Free Syrian Army (FSA) are being dispatched to the front lines in Manbij at the border with YPG/PKK terrorist organizations and Asad regime forces, on December 24 in Azez, Syria. Anadolu Agency

News agencies reported yesterday that the Syrian regime is dispatching forces and equipment to the village of Arimah, 25 km west of Manbij.

Reporting from the region, news agencies stated that 40 pickup trucks, 2 military tanks, several trucks with military equipment and military personnel together with armored vehicles have entered Armiyah, a village near Manbij.

Reuters claimed that the Syrian regime backed by Russian forces are in coordination with YPG leaders in the Manbij region and are working together in order to respond to the expected military assault by Turkey-backed Syrian rebels who are waiting for the ‘signal’ to come from the Turkish military. Yousef Hamoud – a spokesman for the National Army – the main rebel force in the region backed by Turkey – said “the battle will start soon.”

According to experts in Turkey, after the decision of Turkey to enter the east of Euphrates and the decision of the US administration to withdraw its troops from Syria, the recent move of Syrian regime will once again change the balances in the region. The move of Syrian regime is understood by some experts as the ‘move’ of Russia indicating that ‘Russia cannot be left aside’ after the withdrawal decision taken by Trump in consultation with Erdogan.

Speaking to the Turkish press yesterday, Turkish Foreign Minister Mevlut Cavusoglu remarked that Turkey is determined for a military operation in the east of the Euphrates. He added that Turkey is pleased with the withdrawal decision of the U.S. administration and will continue its military and diplomatic conducts in the process of this withdrawal.

Cavusoglu also remarked that both the U.S. and Turkish governments agreed on the Manbij issue and informed reporters that both countries are working closely in order to complete the process. It is reported that Cavusoglu will visit Russia in the upcoming days in order to discuss the U.S. withdrawal process.

Anadolu Agency reported that the military equipment and trucks of the Turkish army have reached Elbeyli, Kilis – less than 150km north of Manbij.