The investments made in the lobbying works and the U.S. and Russia will not be enough to save the Crown Prince. The efforts will surely save a little time, but the strong evidence presented by Turkey to the world public has the potential to make MbS confront the truth he is trying to escape. 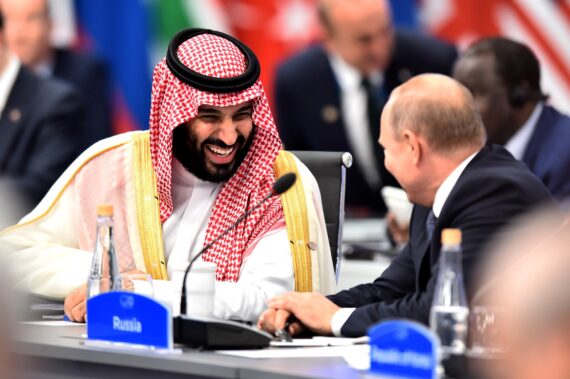 The G20 Summit organized in Buenos Aires, Argentina, appeared on the agenda with debates revolving around the Saudi Crown Prince Mohammad bin Salman, or known as MbS, who was found culpable by the global media for the murder of journalist Jamal Khashoggi. MbS was the media’s focus of attention with his appearance at the Summit despite the accusations against him. His attitude during his meeting with Putin and his expression during his encounter with U.S. President Trump were especially noteworthy. Various comments made on MbS underlined that he had been aspiring to restore his battered image. The Crown Prince undoubtedly kicked off works to clear his image after the world starting pointing at him in regards to the Khashoggi murder. So, his appearance at the G20 Summit must be read as a continuation of this process. In a retrospective consideration, it can be seen that MbS has been exerting efforts for perception management in the aftermath of the Khashoggi murder.

The evidence presented by the investigation pursued by Turkey presented to the public that names that were closely allied with the Crown Prince were part of the murder team in regards to the Jamal Khashoggi case. Another allegation published by the New York Times on November 14 revealed the links that directly connected MbS to the murder. According to the news report, shortly after Khashoggi was murdered at the Saudi Consulate in Istanbul on October 2, a member of the hit team instructed a supervisor over the phone “tell your boss,” – this boss is believed to be MbS and that his operatives carried out their mission. Also, the Washington Post, a paper that Khashoggi was a columnist of, printed a full-page photo of MbS on its front page with the caption “Demand the Truth,” in address to the U.S. Secretary of State who was heading to Saudi Arabia at the time. This demonstrated that he was held accountable by the global media. Similar claims have also been made by various politicians and journalists from different countries. Consequently, a general agreement can be observed with regard to the Crown Prince’s link to the murder.

Oxygen tube from Trump to the Crown Prince

Even U.S. President Trump, who is one of the closest allies of the Crown Prince, has tried to justify his continuing support to MbS to the world public by listing his financial excuses. With this attitude, he hinted that although he has been defending him, Trump could blackmail MbS whenever necessary. For Trump, the most important point is the payments that are to be made to the U.S. and MbS thinks that he can buy anything. These two approaches complement each other. Due to this attitude of President Trump, the world public was expected to forget the atrocious murder. However, it didn’t really work that way.

Trump’s remarks on the Khashoggi murder, such as that it was the worst cover-up effort he had seen in history and that the Prince may or may have not been a part of the murder, indicates that Trump actually knows the truth but is using it in line with his own interests. Such statements that occupy the global agenda and distract the media work to the detriment of the Crown Prince. It can be contended that the “controlled” statements of Trump function as an oxygen tube for MbS. Thus, MbS, who is aware that an escape corridor has been opened for him thanks to Trump’s s support and Russia’s affirmative gestures, is endeavoring to regain his popularity and restore his tarnished image after the murder. But the methods employed for this goal are quite predictable and familiar. Among them, three methods particularly stand out.

Million dollars and free tickets by MbS for lobbying companies

The first method is to continue funneling money to U.S.-based lobbying companies and to prevent any activity that will keep the murder on the agenda by transferring money to U.S.-based think tanks. In this sense, the comments of Human Rights Watch Deputy Program Director Tom Porteous are worth attention. Porteous stated that Washington-based think tanks abstain from criticizing Saudi Arabia despite the country’s long-standing human rights violations since they receive funds from Riyadh. His statements consolidate the doubts revolving around the continuation of such processes. Previously established relationships based on mutual interests can be said to be behind the strong claims suggesting that Prince Salman kicked off works to adopt a new image through the arms deals and the funds given to global PR companies. Porteous ended his statement by stating that think tanks always agree with Washington on U.S. foreign policy, which alludes to the Trump administration’s ambivalent attitude on MbS.

An article titled “Inside the Saudis’ Washington influence machine: How the Kingdom gained power through fierce lobbying and charm offensives,” which was published by Washington Post on October 23, explained how the Saudi administration uses its financial power for PR works and how this situation persisted in the aftermath of the Khashoggi murder. According to this article, 27 million dollars was spent on lobbying activities in 2017. It was also emphasized that MbS used his financial power to develop close relations with influential politicians and business people in Washington, especially Trump’s son-in-law, Jared Kushner. Within this scope, the Saudi Embassy in Washington is said to be hosting occasional galas and U.S. congress members attend these events via lobbying companies.

MbS used his financial power to develop close relations with influential politicians and business people in Washington, the Saudi Embassy there is said to be hosting occasional galas and U.S. congress members attend these events via lobbying companies.

The article went on to claim that Saudi officials offered Super Bowl tickets and chartered flights to the event. It would be no exaggeration to state that this is linked to the fact that there was not considerable public reaction to the Khashoggi murder aside from the U.S. media outlets that fell out with Trump. An analysis titled “US lobbyists continue working with Saudi Arabia after the Khashoggi killing,” published by TRT World on November 21, also covers some detail showing that the previously signed deals between the two countries have not been cancelled. The analysis points out that there are 36 U.S. firms that are actively lobbying for Saudi Arabia in the U.S. and that these companies are spending millions of dollars in order to impress political actors.

There are 36 U.S. firms that are actively lobbying for Saudi Arabia in the U.S. and that these companies are spending millions of dollars in order to impress political actors.

The second method is to consolidate alliances and initiate large-scale operations that will change the global agenda. The Gaza attacks of Israel, which is the strongest regional ally of Saudi Arabia, are generally evaluated in this context. Decreasing the pressure on the Crown Prince by distracting the attention of the global public stands out as the leading cause. An argument supporting this approach was covered in a news report published by New York Times on December 8. Stating that MbS and Kushner were on a first-name basis, calling each other Jared and Mohammed, the report reads that the two names talked to each other many times after the murder via text message and phone calls. The report titled “The Wooing of Jared Kushner: How the Saudis Got a Friend in the White House,” also states that Kushner is the leading White House figure that favors the Prince after the murder. So, it can be seen that Kushner has a major part in the PR works of MbS.

On the other hand, the acceleration of the operations in Yemen by Saudi Arabia coalition can also be interpreted as another distraction attempt by the Prince. The Prince seems to be in search of compensating the public pressure on him with a victory that could be obtained in Yemen. Besides, the efforts to consolidate the alliance formed during Trump’s Saudi Arabia visit are also notable. In this sense, MbS probably tried to create a positive impression by paying visits to UAE, Egypt, Bahrain and Tunisia before heading to the G20 Summit.

Thirdly, as already mentioned above, the Crown Prince regarded the Summit in Argentina as a component of his PR works. It is obvious that the positive statements on MbS issued by both Trump and Putin ahead of the Summit encouraged him while providing him with a ground for legitimacy.

In his meetings with both leaders, MbS behaved in a way to respond to their gestures. While the leaders were taking their seats after the shooting of the family photo, Putin and Prince Salman greeted each other quite candidly and exchanged a high-five. Although the sincerity between them has different meanings for Putin, it was very valuable for the image works of MbS under the present circumstances. A similar case also occurred during the MbS-Trump encounter. Although they did not seem particularly close, the two names gave the impression that they approve each other, which was another crucial acquisition for MbS from the Summit.

Apparently, the two superpowers did not pay so much attention to the cold-blooded murder of Khashoggi in the Consulate building by a murder team including names from the Crown Prince’s close circle. Both countries seem to be approaching the issue in line with their own interests rather than questioning the names behind the murder. It is clear that MbS is using this opportunity served on a silver platter by the two superpowers to the fullest. Considering the interests of the two superpowers and the other counter-propaganda and lobbying activities undertaken by the Saudi administration, it can be argued that the G20 Summit has been one of the platforms where the Crown Prince continued his PR works.

The investments made in the lobbying works will not be enough to save the Crown Prince. They can  save a little time, but the evidence presented by Turkey to the world public will make MbS confront the truth he is trying to escape.

Still, many cases show that such image restoring efforts will remain insufficient against the bare truth. In this sense, the questions asked by Turkish President Recep Tayyip Erdogan on the Khashoggi killing in Argentina, such as the location of the body, the identities of local abettors and the real orchestrators of the murder constitute the greatest impediment to MbS’s efforts for a new image. The image aspired to be created by spending multi-million dollars is backlashing in the face of the naked truth addressed with these questions. Therefore, the investments made in the lobbying works and the two superpowers will not be enough to save the Crown Prince. The efforts will surely save a little time, but the strong evidence presented by Turkey to the world public has the potential to make MbS confront the truth he is trying to escape.