Mothers’ Sit-In Protests in Diyarbakir: A Catalyst for Resistance against the PKK?

The mass protest by the families, whose children were abducted and recruited by the PKK, may become a game changer in the fight against terrorism. 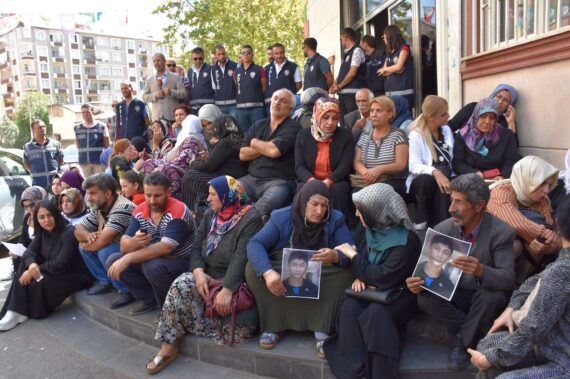 Families join a sit-in protest in order to raise their voice to save their children from the hands of the terror group, outside the provincial office of a Peoples' Democratic Party (HDP) as they claim their children joined the ranks of the terror group through members of the Peoples' Democratic Party in Diyarbakir province, Turkey on September 07, 2019. AA

Last week, Hacire Akar started a sit-in protest in front of the HDP building in Diyarbakir. Akar claimed that her 22 year-old-son, Mehmet, had been kidnapped by the PKK. She continued her protest until her son was brought to her. Her determination encouraged other mothers to make their voices heard, with many mothers starting their own protests to bring back their sons and daughters kidnapped by the PKK.

Indeed, it is not the first time that mothers took part in a protest to uncover the fate of their children abducted and recruited by the PKK. There had been an earlier wave of protests in 2014 but it did not create much public awareness at that time. The current protests, on the other hand, have attracted the attention of the masses, and the child recruitment practices of the PKK, considered a war crime, has become a topical issue in Turkey.

It is a well-known fact that one of the main targets of the PKK are underage people. Because the emotional attachment of those recruited at the early age is more powerful, they are recruited as child soldiers especially for front-line combat.

Since the peak period of recruitment of the PKK that took place from 1990 to 1994, the target group of this terrorist organization has been underage people coming from low-income families. This group was vulnerable, and it was difficult for these families to protect their children from the influence of the PKK. After their children from these families are recruited, they are brainwashed and trained in accordance with the aims of the organization.

What is the function of child recruits in the PKK? It is known that children are in the most disadvantaged positions in the PKK hierarchy. They are mostly used in the front line during military attacks and underage female recruits are especially trained for suicide bombing missions. Since the case of Zeynep Kınacı in 1996, most of the suicide missions of the PKK have been conducted by young women.

Because of these reasons, the sit-in protests of mothers in Diyarbakir is very valuable to break the long-lasting domination of the PKK over families and children. Raising awareness of the PKK’s child recruits may create positive outcomes and families may play a more crucial role in protecting their children from the PKK propaganda. If families in the region become more conscious on this threat, they make their children and other families aware of it. In the end, this awareness may cause the decline of the PKK’s power.

Thus, the mass protest by the families, whose children were abducted and recruited by the PKK, may become a game changer in the fight against terrorism. At this point, it is also necessary to pay the attention to this issue at the national level. Not only political parties, but also NGOs, academics, and all public figures should realize the potential of the sit-in protests in ending the PKK’s domination over children.