Turkish President Recep Tayyip Erdogan’s words "Jerusalem is a red line for Muslims," summoned up the general opinion for the whole Muslim world on a decision unacceptable for Muslims. 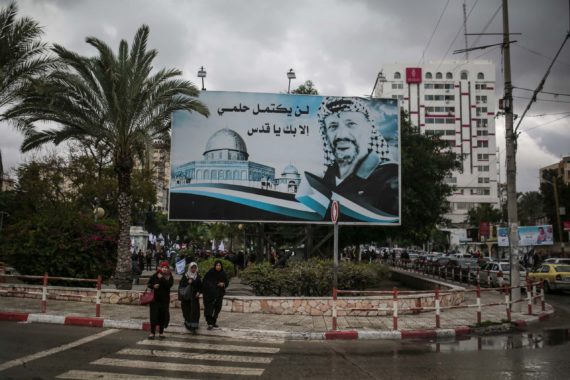 A billboard includes an image of Former Palestinian President Yasser Arafat, and a writing translating "My Dream Will Only Be Completed in Jerusalem" at Unknown Soldier's monument in Gaza City, Gaza on December 06, 2017. Anadolu Agency

The White House said that President Trump will announce that the United States recognizes Jerusalem as the capital of Israel and that the US Embassy in Tel Aviv will be moved to Jerusalem.

According to Anadolu Agency three senior White House officials whose names were not disclosed evaluated Trump’s current Jerusalem accounts for the press via teleconference on Tuesday.

The President is expected to announce that the United States recognizes Jerusalem as the capital of Israel, and is expected explain to the Department of State that he will instruct the US embassy in Tel Aviv to begin preparations for the relocation to Jerusalem.

However the relocation of the US embassy is likely to take years because to find a site, address security concerns, design, fund and finally build a new facility is not an instantaneous process.

White House Spokeswoman Sarah Sanders announced that Trump will announce his decision on the move of the US Embassy in Tel Aviv to Jerusalem on Wednesday (December 6, 2017). President Trump is expected to make his announcement at 1 p.m. in Washington.

One official stressed that certain regions in East Jerusalem are still considered “occupied Palestinian territories” and that “this decision of the President does not suggest a change in the judicial issues in question.” Claiming that the President’s decision is not going to influence the boundaries of sovereignty, he added that these issues are in the domain of the negotiation process.

Netanyahu has remained silent and in his first public appearance after the Jerusalem dispute, Netanyahu outlined Israel’s economic strengths and international outreach in a conference, emphasizing the importance of ties with the United States but refrained from making any statements about Trump’s Jerusalem announcement.

Although Trump’s announcement was not unexpected since his presidential campaign last year, it has prompted a wave of negative reactions from governments and political groups throughout the world.

The question mainly asked is why the US is dealing with this question at this particular moment and why Trump went against the “tradition” of his precedes in delaying such a controversial dispute by signing waivers every 6 months.

Although the senior Trump administration officials say that Trump’s decision is not intended to favor Israel and that a peace deal between Israel and the Palestinians will be essential on the final status of Jerusalem, it is perceived differently by the international community.

Although the direct political benefits for Trump administration are unclear, the decision is pleasing for Republican conservatives and evangelical Christians, a large portion of Trump’s political base.

Analysts suppose that Trump needs all support he can get and accordingly tries to please the Israeli lobby in the US.

While assuring the inner support for Trump, the decision is conflicting with Trump’s so called desire for a more stable Middle East and Israel-Palestinian peace.

To move the US embassy to Jerusalem – while there are no other embassies – set off alarm bells around the Middle East and the Muslim world, raising the prospect of violence.

Biased resolution in the US House of Representatives

Amid all developments the US House of Representatives voted to reduce the annual $300 million US aid to the Palestinian authority unless it takes some necessary measures according to Reuters.

The measure plans to prevent the Palestinian authorities from paying “martyr payments” to the families of Palestinians killed or jailed by the Israeli authorities – payments which can reach $3,500 per month.

Before the vote, Republican Representative Ed Royce claimed that the rewards get greater the longer the jail sentence is or the more brutal the act of killing is.

The measure, which will become law once it is passed by the US Senate and signed by President Trump, again raised questions about the timing while another big discussion is still to be concluded about the final status of Jerusalem.

Although the EU, Turkey and the Arab World are full of disagreement on various issues, the US announcement to recognize Jerusalem as the capital of Israel has brought them together on the same ground.

Turkish President Recep Tayyip Erdogan’s words “Jerusalem is a red line for Muslims,” summoned up the general opinion for the whole Muslim world on a decision unacceptable for Muslims.

“While the wounds of the Palestinian people continue to bleed and every day there are violations of rights and oppressions, such a decision to support Israel is not only a violation of international law, but also a severe disgrace to humanity,” he said.

Questioning the timing of these declarations while more important issues such as the war in Syria and the fight against Daesh is still continuing, President Erdogan warned that ignoring the “inviolability” of Jerusalem for Muslims would lead to “serious consequences” – leading to the break of relations between Turkey and Israel.

Abu Zuhri, senior spokesman for the Hamas told Anadolu Agency, “This unique position of the Turkish authorities and noble Turkish people is a reflection of the leadership and its support of the cause of the Palestinian people.”

While Erdogan’s comments regarding Jerusalem’s importance for the Muslim world have been applauded on a broad spectrum, Israeli ministers have sincerely personalized the issue.

Israel’s Education Minister Naftali Bennet responded to Erdogan by saying “Erdogan does not miss an opportunity to attack Israel. Israel will advance its goals, including the recognition of united Jerusalem as the capital of the state of Israel. Jerusalem has been the Jewish capital for three thousand years, it was never and will never be the capital of anyone else.”

“There is always going to be someone to criticize but at the end of the day it’s better to have a united Jerusalem than Erdogan’s sympathy,” Bennett added.

Interestingly, Bennet’s comments were solely focused on the reaction from Turkey – with no reference to various outcries the US decision caused across the world.

Prime Minister of Turkey Binali Yildirim stated that US’ decision would be an unlawful one, and will put the problems in the region into an incomprehensible stage.

Foreign Minister Mevlut Cavusoglu made a statement after meeting US Secretary of State Rex Tillerson in Brussels. The Turkish FM stated, “It would be a big mistake to move the US embassy to Jerusalem, the whole world is against it”.

Palestinian groups, including Hamas and Fatah, have issued a joint statement calling on the Palestinian people to “gather in front of the city centers, the US Consulates and embassies” and react to the US plan.

In explanations, the young people from the Intifada in the West Bank were urged to respond to the US plan through possible means.

The Arab Parliamentarians’ Executive Committee described the plan as invalid, “This initiative removes the possibility of peace altogether by violating the rights of the Palestinian people who are registered with international law.”

Saudi King Salman emphasized that Saudi Arabia is in support of Palestinians and their historical rights.

Pointing out the importance of the region and Masjid al-Aqsa as the first sacred place, he warned Trump that any change in Jerusalem’s status would harm peace negotiations and increase tensions in the region.

Iran’s Supreme Leader Ali Khamanei, while still being in an unresolved dispute with the Saudis, made clear that Tehran is against the plan of the US, coming to mutual grounds with its foe.

Federica Mogherini, the High Representative of the European Union External Relations and Security Policy, stressed the importance of the peace process between Israel and Palestine suggested that for the fulfillment of all parties expectations Jerusalem should be the capital of both states.

Similar statements have been made by various other states such as France, Germany, Russia, and even by Pope Francis – all underlining that such a decision would undermine peace efforts and potentially evoke protests in the whole region.

Accordingly the White House urged all the US embassies in largely Muslim populated countries to take precautions for protests and unrests in addition the US Consulate General in Jerusalem warned Americans to avoid “areas where crowds have gathered and where there is an increased police and/or military presence.”