The opposition in Turkey is now trying to polarize society through statements made by artists. Does every artist have to be a blind opponent of their country’s government and why does Turkey’s opposition throw a tantrum when artists call for unity? 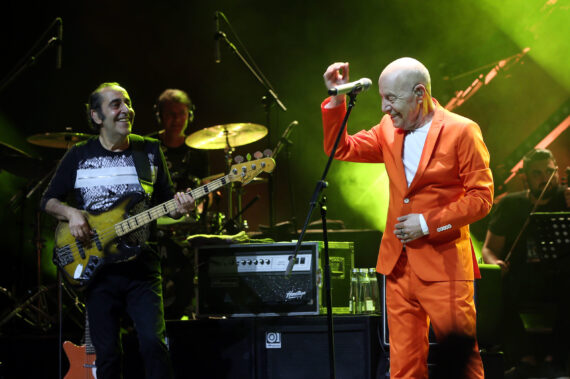 Mazhar Alanson (right), Fuat Guner, and Ozkan Ugur (left) during a concert in Istanbul. Alanson was one of the artists that came under heavy criticism following statements he made that were observed to be "pro-government." Anadolu Agency

The opposition in Turkey is now trying to polarize society through statements made by artists. Does every artist have to be a blind opponent of their country’s government and why does Turkey’s opposition throw a tantrum when artists call for unity?

There is a topic that has been keeping Turkish media busy these days: statements made by prominent artists about contemporary Turkish politics and how these statements have angered the opposition.

Ahmit Umit, a crime fiction author, Bulent Ortacgil, and Mazhar Alanson, both songwriters and singers are famous and reputable in their fields.

Nevertheless, they are not mentioned in Turkey’s opposition media outlets with a favorable connotation due to statements they made in interviews during the past month. Not only media outlets, but social media users were also busy lynching these artists on Twitter.

But what exactly did these artists say, which unleashed such a storm of criticism?

In an interview a month ago, Ahmet Umit made statements such as;

“I believe that we will be able to overcome the problems in our country by accepting each other for who we are and keeping in mind that ‘this is our country and it will be to our benefit if it develops and grows.’ We will never get anywhere if we separate each other. If we unite and start to show empathy towards each other, we become a strong country and nobody can divide us.”

“You can’t be the opposition by only criticizing the government, their deficiencies should be criticized, but their positive policies should also be supported.”

“This country belongs to all of us, we are all on the same ship. If you try puncturing a hole in the lower surface of the ship, we’ll all go down. If there is no Turkey, there’s no us.”

“I love my country. I have traveled all over the world, and I have never seen another country with such a beautiful history and geography. I will live in this land as long as I die.”

A few weeks later, in an interview, Alanson stated:

“We have become polarized nowadays. We have to solve this.”

“The majority of this country is Muslim and live their lives accordingly. That’s how it is.”

“Laicism will never fade away in this land as some claim it will. No one should be afraid. If we accept the facts of our country, we will all be happier.”

“I love Ataturk, but I also love my Prophet.”

In an interview published a day later, Ortacgil made similar remarks;

“What happened on July 15th was terrible. I have been against all kinds of coups throughout my life. On July 15, hundreds of people were killed to stop the coup attempt. A great disaster happened that night.”

“We have to negotiate with the opposition as well as with the government. The results of the election must be respected.”

All these statements are legitimate, sensible, prudent, and aim to bring a divided society together. Social media users who tried to lynch these artists on social media criticized their works and suggested that artists should always be in opposition to the government, as “so-called leftists.”

Fatih Yasli from the Turkish newspaper BirGun went further and claimed, “the new regime is attempting to push its normality on the opposing side through names that are listened to, watched, and respected, and through individuals who have not been labeled ‘partizan,’ but are accepted as ‘neutral.’”

He added that, “this regime has not been able to establish a ‘cultural hegemony’ in the past 16 years and knows pretty well that it won’t be able to do it from now on.”

“They are well aware that they do not have their own novelists, directors, poets, and musicians, or rather that all in their arms reach are below the average and have no prestige.”

This critique from Yasli raised questions – whether establishing a “cultural hegemony” was a positive thing, or what particular statements made these 3 artists pro-government and pro-AK Party. They’re already famous and well respected for the work they produce, so what would they gain from being partisan? And even if they hold a positive stance towards the government, is this enough to call them ‘toady,’ lynch them and underestimate their identity as an artist?

Support for these artists came from one of Turkey’s most popular singers, Haluk Levent, who emphasized that “the artists of this country also have the right to agree with the government. You cannot call every artist that likes the government ‘toady.’”

A somewhat different scenario: Making U-turns after coming under fire

In the above situations, the opposition tried to criticize these artists for the opinions they displayed. However, the case of Derya Koroglu, from the well-known Turkish music band ‘Yeni Turku’ shows the extent of ‘neighborhood pressure’ from the opposition.

After an interview with Sabah’s Tuba Kalcik, Derya Koroglu stated: “Do not believe the words they ‘made me say’ by intentionally putting parts of my speech together. There is no change in my position.”

The only important and ‘political’ statements made in the interview in regards to Turkish politics were, “In Turkey, the left needs to listen to the demands of the people,” and that “Yeni Turku emerged from a leftist worldview, but at the same time we can be considered as ‘conservative’ since we preserve and protect our national values.”

Sabah newspaper published a section of the voice recording of Koroglu’s speech, in which it became clear that these were indeed his own words, reflecting his own opinion. There was no addition to the interview or to the artist’s explanations.

This case is one of my examples that reflect how the opposition’s oppression can make people shy away from their own opinions.

Koroglu’s attitude after the interview clearly showed how violent the opposition can be in terms of ‘neighborhood pressure,’ which was falsely accepted by the opposition camp to be exclusive to the conservatives.

Kalcik, who conducted the interview, made the following remarks after the events took fold: “They can only keep their ideology alive with such hatred. They punish those who do not speak as ‘they’ wish by marginalizing them.”

Kalcik concluded with her final words: “They are trying to lock these artists up in ghettos. They’re trying to destroy their reputation by claiming ‘You either belong with us or you deserve to be levelled-down.’ I wonder in which direction this intolerance will go…”