Underscoring the importance of educational reform, President Erdoğan said that: “It is vain to think that we can make great advancements if our universities and academicians have fallen to a state of stagnancy,” and noted: “If we want to build a safe future, we need to start from education.” 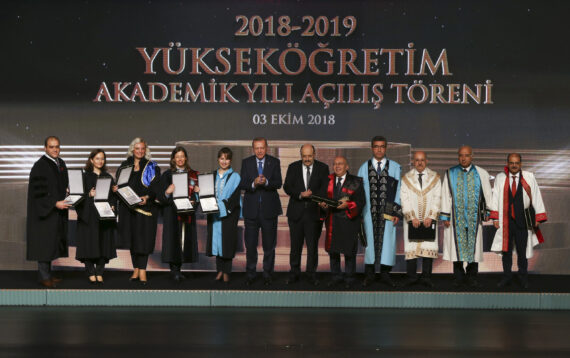 President Erdoğan attended the Inauguration Ceremony of the New Higher Education Academic Year at the Beştepe National Congress and Culture Center and discussed the nature and scope of upcoming educational reforms that would be set in motion.

During his speech, President Erdoğan discussed the current state of national education and the agenda for educational reform. With over 100,000 international students being hosted in Turkey, Turkey has become a favorite among students worldwide. International students are able to obtain education at prestigious Turkish universities with the scholarship program. Turkey Scholarships is a unique international program including university placements. The program provides above standard monthly stipends to beneficiaries, and includes housing, health insurance, tuition fee, Turkish language course and transportation costs. President Erdoğan noted that “Turkey has reached a capacity surpassing its borders.”

Highlighting the importance and need for technological development, President Erdoğan stated that Turkey should be among the global pioneers in the usage and development of digital technologies and that currently there are steps being taken to achieve this objective and that Turkey is duly committed to this pursuit. Underscoring the dependence of economic and social welfare on this development, President Erdoğan added that government support and aid will be provided to projects geared to advance competitiveness and productivity.

Speaking of progress in the career prospects for university students and graduates, President Erdoğan stated that career centers will be established in all universities and “From the onset of their first year in university, these centers will provide career guidance to students and work in close collaboration with the real sector.”

Underscoring the importance of educational reform, President Erdoğan said that: “It is vain to think that we can make great advancements if our universities and academicians have fallen to a state of stagnancy,” and noted: “If we want to build a safe future, we need to start from education.”

The president of the Council of Higher Education, Prof. Dr. Yekta Saraç also delivered a speech and stated that the most important concept for the Council of Higher Education, is “to facilitate change on a scientific basis, thus: to change”. Prof. Saraç noted that in order to stay abreast of the digital age, “there will be a transformation and focus on studies carried out by leading global universities and ‘open access’ will be introduced.”