There are interesting issues being discussed in the media and political circles as to whether AKK will push Merkel in order to become Chancellor at an early date, or whether AKK will continue to work closely with Merkel until 2021, respect her as the country’s Chancellor together with all her preferences – to which Merz definitely does not belong. 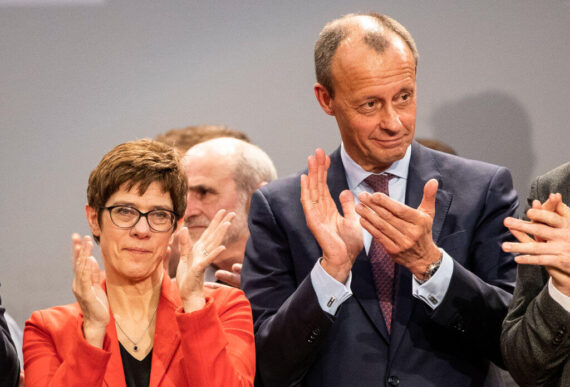 In the past week, German political circles have been discussing whether a potential dispute will erupt between Angela Merkel and her party’s (CDU) chairperson, Annegret Kramp-Karrenbauer (AKK). While some media outlets argue that AKK has recently made a deal with the former chairman of the CDU/CSU parliamentary group (2000-2002), Friedrich Merz, it is not clear whether such an alleged step will cause other complexities. According to the news, AKK promised Merz a federal ministry as soon as she becomes Germany’s next Chancellor. However, it seems that current Chancellor Angela Merkel and the conditions of the current German parliament will not enable such possibilities prior to the 2021 elections.

The discussion become public subsequent to a piece published in Der Spiegel, according to which AKK and Merz made a deal for the time period after Merkel. Merz is a former conservative CDU politician, who challenged both Merkel and AKK in the race to leadership. However, lost the race against both. He quit politics in 2009 and changed to rather lucrative sectors such as consultancy and began lobbying for different companies. When in late 2018 it became clear that Merkel would leave as chair, Merz announced his ambitions to comeback, although he lost against the party’s former secretary-general and Merkel’s close ally, AKK.

But now there are interesting issues being discussed in the media and political circles as to whether AKK will push Merkel in order to become Chancellor at an early date, or whether AKK will continue to work closely with Merkel until 2021, respect her as the country’s Chancellor together with all her preferences – to which Merz definitely does not belong.

By this, it has to be stressed that there is no option that Merz might become a minister under the ongoing leadership of Merkel, while Merz excludes this option as well. Merz is making efforts to reinforce his dialogue with the country’s potential and future Chancellor, AKK. But one has to also keep in mind that Merz does not only want to become a minister (at the best the federal economy minister). He is also closely following both the EU elections and federal elections, which will determine the German federal government’s near future – consisting of a fragile coalition between the CDU, CSU, and SPD.

We will see how German politics and leadership struggles will be shaped in the upcoming months, in particular following the EU Parliament elections in May.

Although the coalition has been maintained for 15 months now and is likely to continue until the next federal elections in 2021, there are certain dynamics of potential importance. One of the most stressed points is the worsening economic conditions and the forecasts for a slowdown in the short term, which is most likely to begin next year. The other point that may trigger heavy discussions within all three coalition parties is the upcoming elections in the federal states of Saxony, Brandenburg and Thuringia. Therefore, the potential fields of dispute and the results of the CDU might have either a positive or negative effect on the remaining two years left of the Merkel tenure.

Finally, one has to also keep in mind that the current two major parties in Germany continue to lose votes according to the regularly conducted election polls. While the CDU/CSU parties still have difficulties in persuading their voters not to turn to the far-right AfD, the Social Democrats (SPD) are also facing similar difficulties in losing their voter base to the Green Party. In this sense, it is an interesting phenomenon that the co-leader of the Green Party, Robert Habeck, has become one of Germany’s most popular politicians. In addition to the Green Party becoming Germany’s second biggest party, thus overtaking the SPD, scenarios regarding a future CDU/CSU/Greens coalition is also on the table. This will lead to political deadlock due to the serious disagreements among the parties.

We will see how German politics and leadership struggles will be shaped in the upcoming months, in particular following the EU Parliament elections in May.