According to a Turkish newspaper, the U.S. allowed the PYD to establish a new camp in Faysh Khabur - at the border gate between the regional government of northern Iraq and Syria, when the Iraqi army took action to provide control over all border territories in the country. 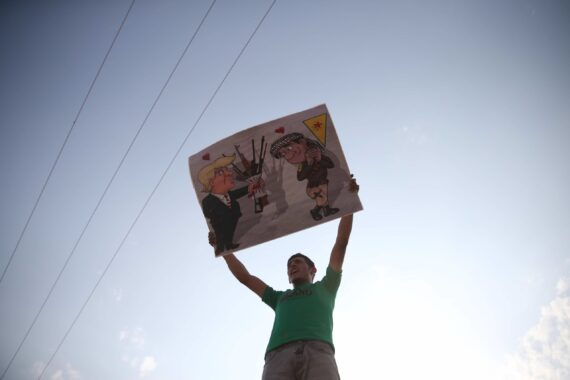 A Syrian refugee man hold a banner which depicts US President Donald Trump and a PYD terrorist, during a protest against PKK/PYD terrorist organization by Syrian refugees, including Syrian Kurds, at the Syrian border next to the Syria's Ras al-Ayn town, in Ceylanpinar District of Sanliurfa, Turkey on September 17, 2017. Anadolu Agency

The U.S. government continues to support the People’s Protection Units (YPG) in Syria under the pretext of destroying Daesh. The U.S. provides various military capabilities to the terrorist group that include heavy weapons.

Meanwhile, NATO-ally Turkey has strongly opposed the U.S. engagement with the YPG, the Syrian branch of the PKK, which is listed by Turkey, EU, and the US a terrorist organization.

President Erdoğan recently expressed discontent about providing weapon to the terrorist organization, claiming; “Who can guarantee that these heavy weapons will not be used against Turkey tomorrow?”

While these debates are ongoing, a Turkish newspaper reported on Monday that the U.S. set up PYD military quarters in Faysh Khabur.

According to the newspaper, the U.S. allowed the PYD to establish a new camp in Faysh Khabur – at the border gate between the regional government of northern Iraq and Syria, when the Iraqi army took action to provide control over all border territories in the country.

Faysh Khabur remains the only gate open to Syria for the regional administration in northern Iraq after Iraqi forces recently took control of the Rabia Border Gate between Iraq and Syria.

Amid all developments, it was announced that the Turkish Prime Minister Binali Yıldırım is to visit Vice President Mike Pence on Tuesday in the White House. It was stated that U.S. assistance to the PYD was one of the headlines on Yıldırım’s agenda, along with other critical issues including the refugee crisis and the current visa row. The two will be discussing bilateral political, economic and military ties and also regional issues in Syria and Iraq.

In addition to the U.S., already party to the Astana talks, the Russian administration has also brought the YPG to the political forefront.

Russia announced late last month that on November 18 a meeting will be held in the Black Sea resort of Sochi to discuss Syria’s future constitution with the participation of 33 Syrian groups and political parties, including Kurdish groups and anti-Assad rebel factions.

Turkey strongly objected to the invitation of the PYD and YPG, and Presidential Spokesman Ibrahim Kalin announced on Sunday that Russia has postponed the meeting they planned to organize under the name of Syrian Peoples Congress in Sochi as a result of Turkey’s objection and that YPG will not be invited to the upcoming congress.