'No civilians killed or hurt in Operation Olive Branch' 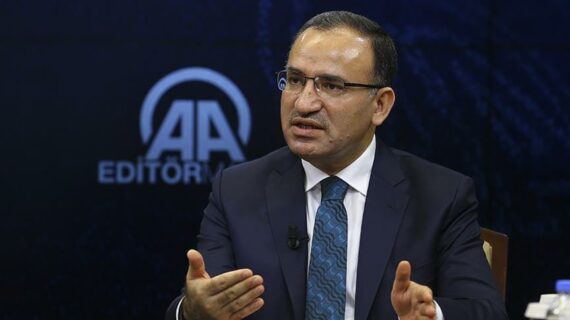 Turkey’s deputy prime minister said Thursday that during Turkey’s current counter-terrorist Operation Olive Branch in Syria, there have been no civilian casualties or injuries.

Speaking at Anadolu Agency Editors’ Desk, Bekir Bozdag said: “To date, no civilians have died or even been hurt in Turkish Armed Forces operations.”

Anyone who backs or patronizes the terror group PYD/PKK, including the U.S., will face a response by Turkey, Bozdag said.

The U.S. has called the PYD/PKK a “reliable ally” in its fight against Daesh, against strong objections by Turkey, which has documented that the group is an offshoot of the terrorist PKK.

In its 30-year terrorist campaign against Turkey, the PKK — recognized as a terrorist group by the U.S., EU, and Turkey — has taken some 40,000 lives.

According to the Turkish General Staff, the operation aims to establish security and stability along Turkey’s borders and the region as well as to protect Syrians from terrorist oppression and cruelty.

The military also said only terror targets are being destroyed and the “utmost care” is being taken to avoid harming civilians.