The goals of small Kurdish parties in creating a Kurdistan free from the Turkish state’s jurisdiction is neither realistic nor moderate, even for the local population. Under such circumstances, it seems like the electoral race in the region will, once again, be between the AK party and the HDP. 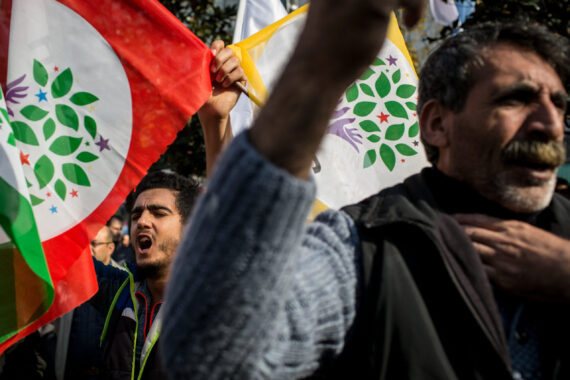 Supporters of the Peoples Democratic Party (HDP) chant slogans during a rally on October 30, 2016 in Istanbul, Turkey. Getty Images

After weeks of the upcoming June elections’ topping the agenda, Turkey has shifted its focus elsewhere. Israel’s massacre of over 50 unarmed Palestinians at the fences separating Gaza from Israel and the rest of Palestine has been the top matter on Turkey’s agenda over the past week. All the major parties have condemned Israel’s brutality and a number of them called for or have already organized rallies protesting Israel. In the midst of the growing fury over Israeli violence, the ruling AK Party asked the Israeli ambassador to leave, a measure soon retaliated by Israel.

President Erdogan has also called for rallies in Istanbul and Diyarbakir to show solidarity with Palestinians. CHP leader Kilicdaroglu also slammed Israeli aggression in his speech during the party meeting while he was wearing a Palestinian scarf. Another opposition party, HDP, also condemned Israel’s act. While the “black Monday” shifted Turkey’s focus away from its upcoming elections to Gaza, this still took place in the electoral atmosphere. With respect to Turkey’s Kurds, we saw different reactions to the event occurring in Gaza.

The two major parties that can attract Kurdish votes, the AK Party and HDP, both condemned Israel. A minor but still influential Islamist and ethnic Kurdish party, Hüda-Par was also severe in its criticism of Israel. Yet, different voices have been heard from the rest of the smaller ethnic Kurdish parties as some of them criticized both the AK Party and the HDP for paying this level of attention to the problems of non-Kurds, namely Palestinians. This latter split occurred in the midst of the search of those ethnic parties, which feel that there is not one yet, but that there needs to be an effective and genuine “Kurdistani” political movement in Turkey.

Amongst such minor parties, the Kurdistan Socialist Party (PSK), Kurdistan Freedom Party (PAK), Northern Kurdistan Democratic Party (KDP-Bakur), Kurdistan Democratic Party-Turkey (KDP-Türkiye), Rights and Freedoms Party (Hak-Par), and The Movement of Freedom (Azadî Hareketi) attempted to write a protocol first, and then have a meeting and subsequent agreement with the HDP to run for the June elections with a joint list. The Kurdish-based Freedom and Socialism Party (OSP) had already rejected to cooperate with other smaller ethnic parties by aligning itself closer to the HDP.

PDK-Bakur became one of the earliest splitters and declared that it will not run for the elections, which it sees illegitimate. Finally, on Thursday, the remaining five parties declared that the attempts to form an electoral coalition with the HDP has failed. The parties, in a joint declaration, stated that the HDP did not pay attention to their demands. Accordingly, the HDP declared its electoral manifesto without consulting the coalition of the five. Further, the coalition of the five saw the HDP’s electoral manifesto against the spirit of the negotiations that occurred between them and the HDP. The major critique of these smaller ethnic parties to the bigger ethnic party HDP is that HDP is not ethnic enough. They accuse the HDP of betraying its Kurdish constituency and the “Kurdistani values.”

At the end of the day, these smaller ethnic parties do not have significant electoral support and, hence, their support would not mean much numerically. Nevertheless, the end result illustrates a strange dilemma in Turkey’s heavily Kurdish populated districts. What we see in the region is the dominance of the mainstream AK Party and ethnic political parties. Yet, the latter category is far from forming a unitary bloc. The heaviest chunk of the bloc, HDP, is instrumentalized by the PKK in the legal political sphere of Turkey. Hence, the HDP fails to embrace a peaceful political discourse that can renounce and distance itself from PKK terrorism.

The smaller chunk of ethnic parties are way more moderate in terms of the “methods” of mobilization, as they are all peaceful movements. Nevertheless, their goals of creating a Kurdistan free from the Turkish state’s jurisdiction is neither realistic nor moderate, even for the local population. Under such circumstances, it seems like the electoral race in the region will, once again, be between the AK party and the HDP.