Nobel Peace Prize Should Have Gone to...

Of course, Murad’s and Mukwege’s experiences are unbearable and the duty they take on is virtuous. However, it does not seem a mere coincidence that the issue is finally linked to the terrorist group, Daesh, which is pointed as an example of Islam by all Islamophobics, including academics, politicians, and journalists. 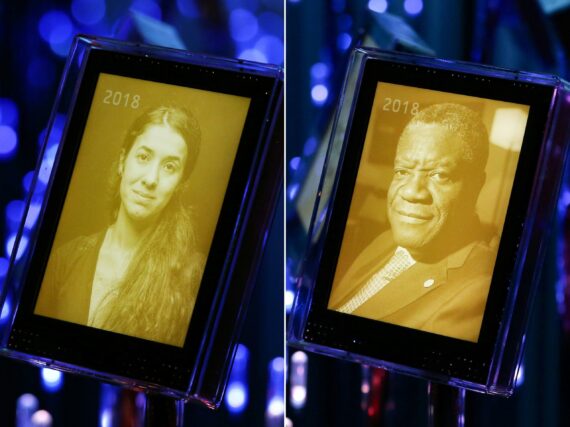 For instance, in Sweden, a total of 7,726 rape cases were recorded in 2017. When considering the 2016 record of rape cases, Sweden ranks the world’s second country in which rape cases occurred the most. Or, according to a study conducted by the Thomas Reuters Foundation, the U.S. ranks third in the list of the world’s most dangerous countries for women (2018). Also, according to the French Institute for Demographic Studies (INED), 580,000 women and 197,000 men were subject to various forms of sexual violence in France throughout 2015, while more than 60,000 women were harassed or raped. Bear in mind that all these odious incidents took place in an environment of peace and order, not in times of war or conflict.

Undoubtedly, there are numerous people and institutions in the West striving for the rehabilitation of the victims or resisting and acting against sexual violence. The Nobel Peace Prize could and should have been awarded to one of them. This would have at least given the opportunity to re-discuss the obsolete theories of the Freud school on “sexual repression and its consequences.” Although the theory collapsed long ago, since nothing seems to have been repressed in Europe for the past 50 years, the award could have paved the way for a new discussion platform on this issue.

Of course, Murad’s and Mukwege’s experiences are unbearable and the duty they take on is virtuous. However, it does not seem a mere coincidence that the issue is finally linked to the terrorist group, Daesh, which is pointed as an example of Islam by all Islamophobics, including academics, politicians, and journalists.

On the other hand, it is ironic that Western countries raise awareness against violence through Africa – a continent they colonized and exploited for centuries. Besides, the world media never mentions the Lord’s Resistance Army (LRA), a terror group that has been active for 30 years, and is no less violent than Daesh.

Is anyone familiar with the LRA, which operates in Uganda, South Sudan, and the Democratic Republic of the Congo, and which has the aim of establishing a theocratic Christian state? They cut people’s limbs using the machetes they accept as sacred and introduce the children they abduct to their violent activities by forcing them to slice their families.

The group also enslaves women and is accepted as the leading child abusive organization in the world. Founded in 1987, with the aim to establish an order in compliance with the Ten Commandments, the LRA is responsible for hundreds of thousands of deaths and displacements in Uganda, Sudan, the Central African Republic, and the Democratic Republic of the Congo.

Its leader Joseph Kony, is sought for war crimes including sexual slavery, rape, torture and kidnapping. The limited number of news reports published about the organization never link it to Christianity or the Bible, as opposed to the millions of analogies between Islam and terror made through the Daesh case. When the LRA is occasionally mentioned, it is referred to as a mystic rebel group.

Despite the Nobel Prize, the name of the group, which was storming the world media until a few years ago, was not brought up. Instead, the general title of “war and rape” was employed since everyone, including the troops sent by the UN and other state forces, were involved in rape cases during the civil war in Congo.

The Nobel Peace Prize is already a controversial one. Irish writer Bernard Shaw once said: “I can forgive Alfred Nobel for having invented dynamite, but only a fiend in human form could have invented the Nobel Prize.” Sweden and Norway, whose colonialist past in Africa has only been brought to the agenda recently, have drown attention with their humanitarian aid organizations in the continent over the last 50 years. Well, they could share the Nobel Peace Prize among themselves. If the aim is to give a message against sexual violence, it is still no problem. Now the message of “Daesh and Africa, the continent of civil wars” are extremely perfunctory even in today’s post-truth world.

Also Read
Notturno: A Dark Purgatorial World in the Fertile Crescent
We use cookies to optimize your online user experience. To learn about our use of cookies and how you can manage your cookie settings, please see our Privacy Policy. By continuing to use our site you are excepting our use of cookies.Accept Cookies & CloseMore Info