Mourning the victims of the Bir al-Abed attack, Turkish authorities announced that flags will fly at half-mast at representations in the country and abroad. 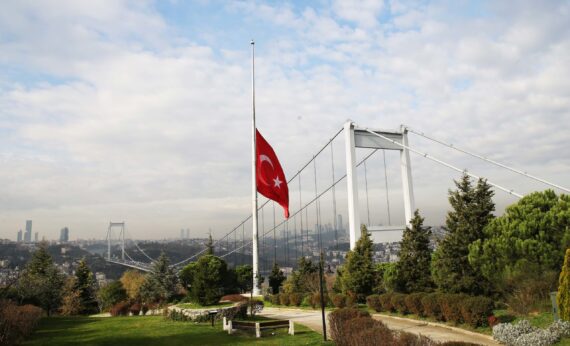 A Turkish flag flies at half-staff at the July 15 Martyrs Bridge in tribute to al-Rawdah mosque bombing in the town of Bir al-Abed west of El Arish in North Sina, in Istanbul, Turkey on November 27, 2017. Anadolu Agency

It is Monday, November 27 and it is the day of mourning in Turkey for the victims of the deadly terrorist attack on a mosque in Egypt. Flags will fly at half-mast at Turkish representations in the country and abroad, Turkish government authorities have announced.

On November 24 terrorists hit a mosque in the town of Bir al-Abed, in the northern Sinai, and then opened fire on fleeing worshipers, killing more than 300 people.

It was the deadliest attack in the country after Egyptian military forces raided two camps of protesters on August 14, 2013 – one at al-Nahda Square and another at Rabaa al-Square – killing more than 1,000 people in a single day, according to the rights groups. The sit-ins in the two camps were held to protest the overthrow of the democratically elected President Mohamed Morsi.

In the aftermath of the overthrow of democratically elected Egyptian President Mohamed Morsi by Military general Abdel Fattah el-Sisi, relations between Ankara and Cairo had been at odds. The announcement of mourning by Turkey would send signals of solidarity with Egypt as well as Muslims and humanity in general.