Öcalan’s Birthday and the PKK’s Day of the Dead 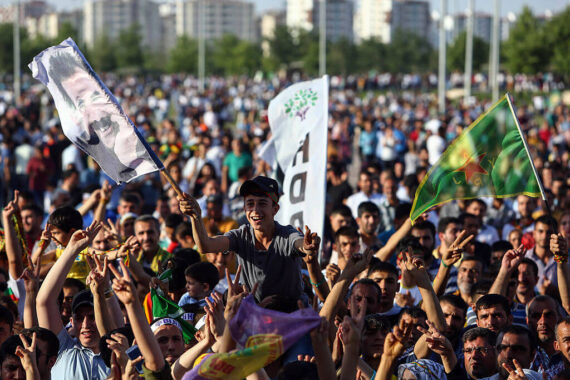 Supporters of the Peoples’ Democratic Party (HDP) wave flags with a picture of the jailed PKK leader Abdullah Ocalan during a party rally in Diyarbakir, Turkey. Getty Images

According to the PKK terrorist organization’s media outlets, last week was PKK leader Abdullah Ocalan’s birthday. On this occasion, the PKK’s umbrella group – the Kurdistan Communities Union (KCK) – released a statement for those in prison who died during hunger strikes and for those that are continuing their hunger strikes in retaliation against Ocalan’s isolation in prison: “Leyla Guven, our comrades in dungeons and all across Europe are sacrificing their lives to pay back the leader Apo, who led to their actual birth.”

Of course, the statement does not say anything about how many lives it takes to “pay back.” But since being an Ocalan proponent means birth to them, the door is open to all supporters of the PKK and the Peoples’ Democratic Party (HDP). The statement continues, “Today, Kurdish women and youth are sacrificing their lives for Apo because of his contributions to women and youth. This reality goes for all Kurdish people, especially women and youth.” So, according to this peculiar reasoning, Kurdish people must die for Ocalan. However, apparently this rule does not apply to senior PKK figures such as Cemil Bayik, Duran Kalkan, and Murat Karayilan. These three seem to be “paying back” by encouraging death and murder instead of sacrificing themselves. Surely, there are various types of pay back in the organization.

Kurdish people must die for Ocalan. However, this rule does not apply to senior PKK figures such as Cemil Bayik, Duran Kalkan, and Murat Karayilan. These three seem to be “paying back” by encouraging death and murder instead of sacrificing themselves.

For instance, Selahattin Demirtas’s brother, Nurettin Demirtas, declared Seher Cagla Demir – (codename Doga – meaning nature in Turkish), also the perpetrator of the suicide attack in Ankara three years ago, which killed 36 civilians and left 349 injured, as a “hero.” In an article he wrote for Yeni Özgür Politika, he said: “Doğa is Heracles. Some people distort the subject by claiming that we valorize death and organize suicide attacks like Daesh. Doğa cannot be associated with death or suicide attacks. She is a hero, a lotus flower who cannot be stained by any means.”

Another example is from former Member of Parliament Sabahat Tuncel, who is currently paying back to Ocalan according to the terror group’s formula, in prison. She was also of the opinion that HDP owed to the PKK militants organizing suicide attacks. As can be remembered, she publicly praised the PKK militant Zeynep Kınacı, who walked into a group of soldiers during a flag-raising ceremony in Tunceli with explosives wrapped around her abdomen, pretending to be pregnant, and blew herself up, leaving 8 soldiers dead and 29 wounded. Tuncel said: “We owe our current freedom and political presence to this fight and friends like her. We must see her suicide against the system as part of our own fight.”

Following the HDP’s Hakkari deputy Leyla Güven and the statements issued by senior PKK names, six PKK proponents have died, or paid back to borrow the terror group’s discourse, as a result of hunger strikes or suicide. According to HDP Law and Human Rights Committee Spokesperson and Batman deputy Ayşe Acar Başaran, the 335 convicts who started hunger strikes as of 16 December, 2018 are currently in critical condition. According to the terror group, these 335 people are about to pay back their debt soon!

According to HDP Law and Human Rights Committee Spokesperson and Batman deputy Ayşe Acar Başaran, the 335 convicts who started hunger strikes as of 16 December, 2018 are currently in critical condition. For the PKK terror group, these 335 people are about to pay back their debt to Öcalan soon!

A European delegation with persons coming from Germany, Sweden, England, France and Norway were in southeast Turkey last week to observe the local election. They paid support visits to the “heroes,” including Leyla Güven. Each of them said that the isolation of Öcalan must end as it does not have any justification on humanitarian or legal terms. But none of them mentioned the terror group’s atrocities. None of them asked why the group does not end the hunger strikes and keeps calling people to die.

None of them issued even a tepid criticism to the endless obedience and submission of mayors and deputies, who used the means of civil politics to have their offices, to this brutal terror group. None of them spoke on the mothers shedding tears for their children abducted or recruited by the terror group. They also seem to accept PKK’s formula: Those not supporting the PKK are not Kurdish, only the PKK and HDP proponents are Kurdish, and they “owe” their identity to the organization and thus each one of them is a potential “hero.” Besides, this is only one aspect of PKK’s innumerable atrocities. I am not even referring to the thousands of civilians and Turkish and Kurdish soldiers who lost their lives in the terror group’s attacks. Looked through this lens, the positions of heroes and the indebted will become even more complicated adding the countries supporting the terror group. This is the true nature of violence and atrocity.