One of every two Europeans dissatisfied with EU’s direction

European Union public opinion survey conducted last month by Eurobarometer shows the latest sentiments regarding EU. The official results which were revealed on October 17 indicate that half of the European citizens are dissatisfied with the direction that the EU is headed towards. 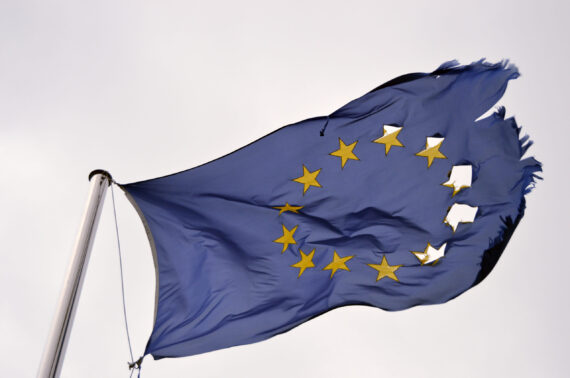 Frayed European flag. The flag has 12 yellow stars; but this flag has five missing or broken. Today the European community faces major challenges. Some countries want to join to take advantage of the funds provided by the most powerful members and these want to leave the union because are tired of supporting the more needed countries. (Getty Images)

A European Union public opinion survey conducted last month by Eurobarometer shows the latest sentiments regarding the EU. The official results which were revealed on October 17 indicate that half of the European citizens are dissatisfied with the direction that the EU is heading towards.

The European Commission’s Eurobarometer conducts official surveys of the EU and regularly monitors the public opinion among the EU member countries at regular intervals to “assess the attitudes and opinions of Europeans about cultural heritage” by “investigating their personal involvement, interests, and the perceived importance and values they attach to Europe’s cultural heritage.”

The latest survey’s fieldwork was conducted between the second and last weeks of September where 27,474 European citizens over the age of 16 were surveyed across 28 member countries.

The results of the survey showed that 50% of European citizens are dissatisfied with the direction that the European Union is headed towards whilst appreciation with EU membership is evident and has reached a 25 year high of 68%. The continued publicization of Brexit and its potential consequences in many EU and British media outlets seems to have worked in keeping Euroscepticism somewhat contained.

The Euroskepticism in Romania has increased 10% since the last survey which was carried out in April this year and results reveal that less than half of Romanian citizens feel the benefit of EU membership. This drastic drop was regarded as “unprecedented” compared to statistics in the last ten years.

Czech Republic is in the lead of Eurosceptic nations among EU member states with a mere 39% who regard EU membership positively for their country followed by Italy at 42%, Croatia at 44%, Greece, which is still battling a series of unabating economic difficulties, at 45%, UK which has already voted out at 48%, Austria at 48% and Romania at 49%.

Eurobarometer also disclosed the major concerns considered as problems by European Union citizens and immigration topped the list at 50%, a foreseeable concern given how it plays into the agenda of many European politicians in their respective local elections amid other recent drastic prospects such as that of closing airports to bar the transfer of migrants indicating the degree as to which this issue is still considered a major crisis across Europe. This was followed by the economy at 47% on par with youth unemployment also at 47%, followed by combatting terrorism at 44%.