Only a Just Constitutional Committee Will Safeguard Syria's Future

The formation of the constitutional committee in line with the UN Security Council Resolution 2254 has been a major obstacle for over the past eight years and only the Astana format has proven itself able to achieve progress. 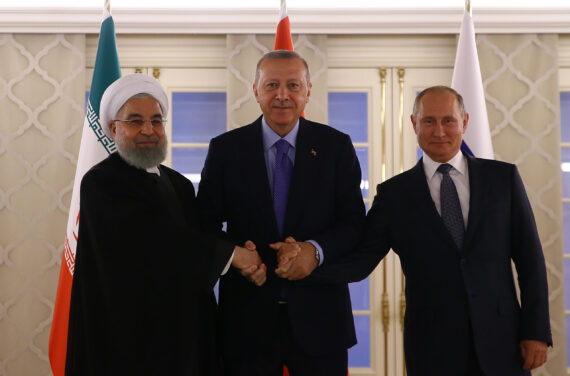 On 16 September, 2019 the leaders of Turkey, Russia and Iran came together in Ankara for a trilateral summit in line with the Astana process. One of the main outcomes of the summit was the announcement of the formation of a participants list for the Syrian constitutional committee.

On 23 September, United Nations chief, Antonio Guterres said an agreement was reached on the composition of the constitutional committee and that the UN considers the committee to be the next step in efforts to find a political solution to end the more than eight-year-long war in Syria. Despite this significant progress, the formation of the constitutional committee isn’t final as the procedures of the committee are yet to be decided, and it is here that the differences between the Astana states will become more critical. The decision over the procedures of the committee will set the framework for Syria’s new constitution. Therefore, before the committee commences, the outcome of these discussions will be the most significant building block towards the reconstruction of Syria.

The formation of the constitutional committee in line with the UN Security Council Resolution 2254 has been a major obstacle for over the past eight years and only the Astana format has proven itself able to achieve progress. After the guarantors of the Astana process formulated their willingness to push along this process, the Assad regime and the Syrian opposition managed to come up with a list of 50 participants from their sides. Both sides were supported by their fellow backers in their efforts to formulate their own list, which is Iran and Russia for the regime and Turkey for the opposition. However, a third list was to be prepared by the UN of 50 independent figures but this faced several obstacles. This third list of independent members is of decisive importance, as whoever can manage to influence more than half of the independent members might secure its majority within the constitutional committee.

At first, the Assad regime protested against the decision-making role of the UN arguing that the UN’s role has to be limited to monitoring rather than taking an active role. Only with the pressure from the Astana format did the regime step back and accept the UN’s role in forming the list of independent members. However, the regime again blocked the process when the UN shared its list with all sides. The Assad regime argued that some of the independent members should have been in the list of the Syrian opposition instead. After diplomatic back and forths, the number of independent people considered problematic by the regime was reduced step-by-step, first to six then three until there was finally agreement on the last person during the Ankara summit.

At the current stage, the procedures of the committee have to be decided, but now the differences will be even bigger and won’t be limited to the Syrian opposition and the regime, but will include the differences between Turkey, Iran and Russia. Among other issues, the most visible will the question of who will head the committee. While Iran and Russia argue that the regime is the legal authority of Syria in the UN and deserves to head the constitutional committee, Turkey underlines that such a move will be fruitless and cannot result in a political solution, as such, the UN has to head the committee. From the Turkish standpoint, the Assad regime can be seen as a legitimate actor only if it wins an election after a genuine political transition process, but for Iran and Russia the regime is already a legitimate actor. After years of cooperation, the Astana process now comes to a point in which they have to decide if the opposition and the regime should be equal, or if both sides should find a solution under the regime’s direction.