Operation Claw entered a new phase on July 12, 2019, by expanding its territorial scope into the east towards the Iranian border that leads the operation’s right flank more active. 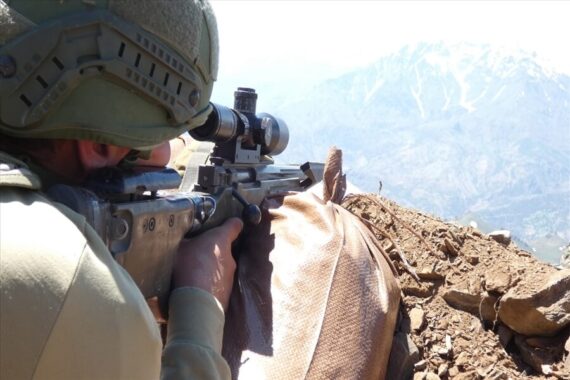 The Turkish Armed Forces (TSK) introduced geographical depth and diversification to its military operations against terror by initiating Operation Claw against elements of the PKK in the Hakurk area in northern Iraq on May 27, 2019. This operation carries critical importance in the creation of a wide and integrated zone for fighting the PKK in Iraqi territory through proceeding in the direction of Mount Qandil, which is the headquarters of the PKK, and expanding towards the Iran border with the regions of Avashin-Basyan and Zap. As such, Operation Claw is the continuation of the cross border operation that started in northern Iraq on March 11, 2018, and is a precursor for subsequent ones.

Operation Claw serves as a bridge in Turkey’s fight against terror in two ways: Firstly, it combines the structural, methodological and technological changes in the fight against terrorism. And secondly, it unifies the cross border operation started by Turkey in 2018 with operations to be conducted in the future. To understand the effects of Operation Claw, its scope must be analyzed. Thus, it is beneficial to briefly review the region, and the goals and concept of the operation along with the capacity of the threat. Following the review, the procedure of the operation, which is the main topic of discussion, and its place in Turkey’s fight against terrorism can be examined.

The operation is being conducted in a mountainous region roughly 30 kilometers deep from the Turkish border and 25 kilometers wide parallel to the Turkish border, starting from the south of Derecik district of Hakkari province, including Iraq’s Kani Rash region and reaching to the rural surrounding area of Chubkan village of Soran district. The distance between the southernmost front of the operation and the PKK’s headquarters Mount Qandil is roughly 55 kilometers, and the distance to Asos Mountain, which is also used by the terror organization and lies further south, is 150 kilometers.

The operation geography makes it possible for elements of the terrorist organization to hide in the terrain, and constitutes a natural obstacle for the troops conducting the operation. Unlike Syrian territory, the region of Hakurk, with its many mountains, hills and deep valleys stretching from east to west, peaks ranging from 1.700 to 3.200 meters and low population density makes it hard and sometimes impossible to conduct armored and mechanized operations. Thus, the horizontal advance made by commando units in the mountainous region needs to be constantly supported by vertical engagement from the air. The low number of settlements in the region significantly reduces the likelihood of civilian casualties during the conduct of the operation.

The tactical aims of the operation are the destruction of the caves and shelters used by the terrorist organization in the Hakurk region along with the neutralization of the terrorists in the region, and the strategical aim is extending and deepening the region for fighting the PKK in Iraqi territory. These actions are motivated to eliminate the PKK’s military capabilities and reduce the terrorist organization’s area of operations. The operation also prevents the PKK’s tactical elements from infiltrating into Turkey over the Hakurk region and makes the detection and engagement of terrorist elements easier by limiting them to a smaller region. The region of the operation is in a position that can be expanded towards the Iran border to the east and Avashin-Basyan and Zap regions to the west, which makes tactical and operative engagement of the PKK targets outside of the Hakurk region easier.

In order to carry out the fight against the PKK deep in the territory of a foreign country and over a large front, the TSK has determined a proper operation concept and chose the elements of the operation accordingly. The field conditions, tactical capabilities of the terrorists and the lessons learned from the operation that started in 2018 can be said to be the main factors in choosing the operation concept. The geographical conditions of the Hakurk region, along with the terrorists moving in small groups of four to five people, make the detection of terrorist elements harder. Due to this, the use of electronic intelligence devices for instantaneous target detection and the use of technical means for instantaneous engagement both increases success and reduces the casualty risk of maneuvering elements.

The operation is being conducted according to a concept that relies on the combined use of maneuvering elements composed of units from the Special Forces Command and commando units alongside tactical elements from the air force with UCAVs and UAVs from the land forces, combat helicopters of the army aviation units and land combat support vehicles providing constant combat support via high firepower and precise engagement. The maneuvering elements that have the capability to capture critical field locations via surprise attack landings are entirely composed of professional soldiers.

The air force elements that directly provide support for the operation can strike PKK targets outside of the operation region as well as meeting the instantaneous firepower needs of the maneuvering units, preventing terrorist elements from making consolidated defenses. Within this context, the importance of precision guiding kits that are developed by national resources, used by the air force and integrated with general-purpose munition must be emphasized. Mini smart munition used by unmanned aerial vehicles have also contributed greatly to the success and tempo of the operation both due to their capabilities allowing them to be used against precise targets and the close air support they provide for maneuvering units. It has also been observed that multiple-launch rocket systems used in the operation to prevent the terrorist organization from moving in large groups have been effectively integrated with the firepower support elements of the operation.

The geographical extent of the operation is not restricted and has the potential to expand in response to new conditions that may arise in the future. Within this context, the main factor that affects the success of the operation is the flexibility of its mission. The underlying reason for this is the compact and mobile capabilities of the units conducting the operation. Alongside the control of the operation area, in the regions outside, the TSK’s mobile air and land platforms can continuously maintain their effect on the PKK, blocking the terrorist organization’s action capabilities on a tactical and operative level.

Against this, the terrorist organization attempts to conduct low risk activities, meaning activities such as long-range mortar attacks and the use of improvised explosive devices (IEDs). And these activities fail to have a large effect due to not being supported by other action tactics. Moreover, the mortar detection radars used by the TSK make it possible to respond to the PKK’s long range attacks even in cases where the attackers are not visible to the eye, and this capability of the terrorist organization is instantaneously defused. Another action practice of the terrorist organization is the deployment of anti-air weapons and land to air portable missile systems against aircrafts. While the PKK attempts to use DSHK series anti-air weapons and SA series portable missile systems against the TSK’s engagement from the air, thanks to the continuous electronic surveillance capabilities of the TSK and the human-sourced information provided by the intelligence agency, the locations of these weapons can be easily determined, targeted and neutralized.

The importance of Operation Claw

The operations Turkey conducts against the PKK within its borders and the intelligence and military operations conducted against terror elements in northern Iraq and northern Syria continue simultaneously. The continuity and integrity of these operations have led the terrorist organization to lose power and become unable to conduct certain organized attacks within Turkey, while causing the erosion of its military capabilities and the loss of the areas under its control abroad. Operation Claw is also a result of Turkey’s integrated approach in the fight against terror, technological transformations in the military and structural reforms. The operation must be evaluated separately from previous cross border anti-PKK operations that had limited extent, and must be seen as part of Turkey’s political and military strategy in its fight against terror. The operation is being conducted in a manner in accordance with Turkey’s strategy of reducing the areas controlled by terrorist elements and addressing the problem at its source in its fight against PKK and with a tempo that lays the groundwork for subsequent operations.

In 2017 and before, PKK had, by diversifying its action capabilities and expanding its fields of operation, forced Turkey to constantly develop strategies focusing on its internal security, and the terrorist organization maintained its presence across the border via this manner. The PKK diversified the locations of its activities within a region in Turkey bound by Tokat-Giresun-Gümüşhane to the north, Kars-Ağrı-Van-Hakkari to the east, Hakkari-Şırnak-Mardin-Şanlıurfa-Hatay to the south and Osmaniye-Adıyaman-Elazığ-Tunceli to the west, and kept the TSK and law enforcement forces occupied in different sectors within the country. But the concept of fighting terrorism that developed and started showing its effects after 2017 drastically changed the situation for the PKK.

As part of Operation Claw, 61 terrorists have been neutralized as of July 14, 2019, and a great deal of equipment, munition and materials belonging to the PKK, including advanced weapons such as the SA-14 portable anti-air missile system, have been captured. Alongside this, PKK’s action capabilities have heavily been suppressed and the region of Hakurk, 500 square kilometers in size and previously used for the purposes of logistics, training, smuggling and indoctrination by the terrorist organization, has been cleared of terrorist elements. Moreover, the operation is being conducted with national resources with a focus on intelligence and operation aspects. Neither is intelligence being received from allies nor are local forces supporting the operation.

Operation Claw entered a new phase on July 12, 2019, by expanding its territorial scope into the east towards the Iranian border. This phase is called Operation Claw 2.

The diplomatic relations between Turkey and the federal government of Iraq as well as the Kurdistan Region of Iraq have raised Turkey’s leverage in terms of intelligence and operations, increasing the country’s level of impact in the region. The diplomatic efforts of Turkey in its fight against the PKK in Iraqi territory both search for common ground in the fight against the terrorist organization and aim to prevent Iraqi territory from being occupied by another terrorist organization again. Thus, the country both defends the territorial integrity of Iraq and fights in the field to increase Iraq’s capabilities of fighting terrorism.

Operation Claw has the quality of being an operation that makes use of the success of Operation Determination, which started in 2018, and due to its goal of removing terrorist elements from a large region of Iraqi territory, it is a first in Turkey’s anti-PKK fight. The operation may lead to many potential outcomes that can contribute to ensuring Turkey’s internal and national security. It can be argued that the existing tempo and success of the operation will contribute to the stability of Turkey and the region within the framework of the following assessments: