Operation Olive Branch must be assessed in two aspects: the role of the operation in Turkey's counter-terrorism policy and Ankara's role in the Middle East. 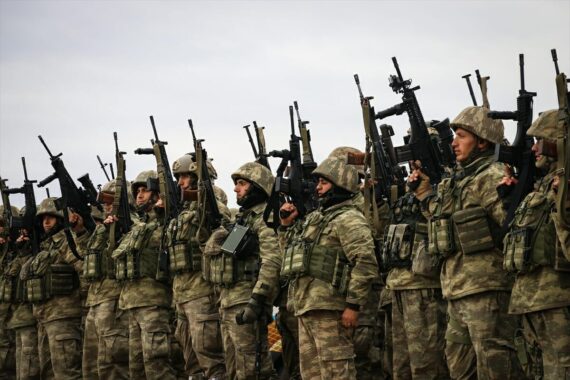 Turkish commandos swear an oath before they move towards to Syrian border as part of the "Operation Olive Branch" in Hatay, Turkey on January 23, 2018. Anadolu Agency

The significance of the Afrin operation for Turkey must be evaluated through two main aspects: The place of the operation in Turkey’s counter-terror efforts and Ankara’s role in the regional geopolitical equation. In this scope, the most feasible alternative to carry the counter-terrorism fight across the border and prevent the PKK from becoming a regional actor in post-Daesh Syria seems to create a strategic state in Afrin. As the operation is viewed through the current situation and risks, it presents a generic scenario. However, it can be estimated that the situation may change at any moment depending on momentary factors and influence the progress of the overall process.

The operation will take place in winter conditions and in a relatively rugged terrain that occupies approximately 2,000 km2 of area. The offensive will take place based on a joint military operation concept against the hybrid terror elements comprising around 6,000-8,000 operatives deployed in fortified lines of defense in rural and residential areas. It can be said that the maneuvers of the operation unit will be provided with land forces having mobile firepower in addition to local paramilitary elements whereas fire support will be provided both from land and air.

Air offensives on the PKK/YPG positions with fire support elements from land are expected, at the initial stage, to concentrate on the Dikmetas village, Minagh Air Base and Tel Rifat town located in the east of Afrin, Sheikh al-Hadid village, Jandaris town and Burj Abdullah village in the south of Afrin, where the main defense lines of the PKK and the YPG are located. The Turkish Armed Forces (TSK) and the Free Syrian Army (FSA) are expected to segregate Afrin by getting through the PKK/YPG defense lines from eastern and southern sectors, and controlling the east and south of Afrin.

In the subsequent phase, PKK/YPG elements may withdraw to the center of Afrin with forward operating TSK units from the northern and western sectors of Afrin. Following this phase, the PKK/YPG may enter clashes, particularly in Afrin’s city center, and force the TSK and FSA forces to collateral damage. Meanwhile, various terror assaults against the TSK and FSA forces may be organized in Afrin, such as attacks with improvised explosives, tactical weapons or assassination attempts.

As the operation kicks off, it is highly possible that the PKK/YPG units might organize attacks in the region where Operation Euphrates Shield was launched by advancing from Manbij, and the border security units on the Turkey-Syria border by advancing from Malikiye-Kamisli-Tel Abyad-Ayn al-Arab line. Syrian regime units may cooperate with the PKK/YPG on the Tel Rifat-Zahraa line and attempt manipulative military actions in order to clog the progress of the TSK and the FSA.

The extension of the operation may lead the Russian and Syrian regime to bring forward speculations regarding the use of Syrian air space. In such a case, Turkey could be forced to enter a direct armed engagement with Hayat Tahrer al-Sham in Idlib. Apart from the ordinary Kurdish people, groups who were radicalized by the PKK in Afrin may raise difficulties in enabling stability and security in the region after the completion of the operation, and might try to problematize Turkey’s presence in Afrin in the international sphere.

The main factors that will determine the success of the operation include speed, coordination, the ability to cooperate with local units and the sensitivity in survival measures. Considering the current situation and risks, the military targets of the operation are the PKK/YPG units for the time being. However, engagement with different threats is also possible during the later stages of the operation.

The Afrin operation is a strategic move in terms of supporting Turkey’s counter-terrorism efforts, geopolitical position and eliminating national security threats. More importantly, the success that is achieved through the operation in Afrin may be employed to intervene in other areas controlled by the PKK/YPG.