Operation Peace Spring was an Obligation to Turkey's Sovereignty

Calling it an invasion falls short of explaining the conditions that brought Turkey to this threshold. Indeed, the latest operation of Turkey is a matter of self-defense. 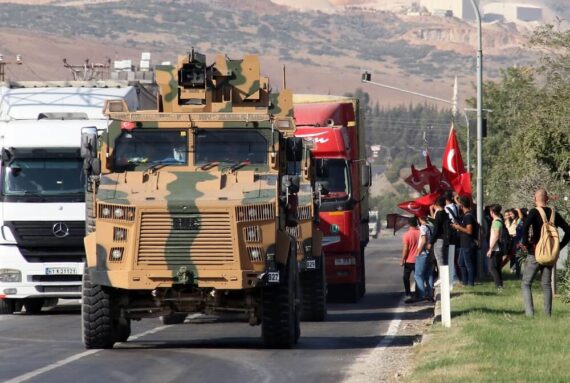 As the basis of the international system, sovereignty is understood as the capability of a country to govern itself, prevent the intervention of other countries, and its recognition in the international arena. Beyond its traditional meanings, in his famous book Sovereignty: Organized Hypocrisy Stephen D. Krasner broke down sovereignty into four types. ‘Interdependence sovereignty’ is the one of them and it is the requirement that a state have effective control of its borders in order to maintain its domestic security. Krasner discusses this and says “if a state cannot regulate what happens across its borders, it will not be able to control what happens within”. In light of this approach, I invite the readers of this piece to think of Turkey’s position, a country which shares its southern border with a fragmented state in a desperate civil war, with terrorist groups close to its border, and facing the risk of a huge flow of further refugees from Syria, in addition to more than 3.5 million already living in the country.

Indeed, Turkey’s latest military operation should have been understood within the framework of border security. However, Operation Peace Spring launched by the Turkish Armed Forces in collaboration with the Syrian National Army generated an entirely different debate in the international arena—whether Turkey’s operation was an invasion or not. These discussions also focused on the supposed political ambitions of President Recep Tayyip Erdogan as a potential motivation for the operation. Putting these misleading perceptions aside, the collective support by the Turkish people for the military operation provides robust evidence of how people from different political backgrounds attach utmost importance to state sovereignty, especially when it comes to questions of national security. Interpreting the operation as an invasion misunderstands a major factor that drives Turkish foreign policy, that it is thoroughly about Turkey’s national security.

To clearly understand this, one should look back to the recent history of Turkish politics. A new security agenda for Turkey surfaced in the 1970s when the first Kurdish opposition groups emerged, and soon after evolved into an ethnic based separatist movement. This generated the PKK, which was recognized as a terrorist organization by the U.S. and EU and took over 40,000 lives in its 30 years of terrorist activity, the PKK terror group became a primary challenge for Turkey’s territorial integrity.

Despite the fact that since the 2000s, the root causes that brought forth the PKK were handled using democratic methods, the territorial integrity issue was not negotiable. Since the 1990s, in line with domestic policy, foreign policymakers responding to the PKK threat sought alliances in the Middle East and cooperated with the US to avert the possibility of an independent Kurdish state. Stances towards the PKK have become a main determinant for Turkish foreign policy. As was demonstrated when Syrian state support to the PKK brought the two countries to the brink of war in 1998.

Since 2011, the Syrian Civil War triggered an ongoing humanitarian catastrophe and turmoil in the region and led to an elevated security concern for Turkey. From the perspective of Turkish policymakers, the refugee crisis and the armament race among terrorist groups at Turkey’s southern borders put the country in a risky position, pushing it to apply stricter and more responsive security measures. The armament of the PYD and YPG, offshoots of the PKK, with the help of the US and European states particularly intensified Turkey’s security concerns. The unending war in Syria,  the insufficient intervention by international actors to address the crisis, and the persistent downgrading of Turkey’s efforts to address the Syrian refugee crisis by European states caused distrust between Turkey and its allies.

Moreover, Turkey had to witness the formation of a terrorist corridor in northern Syria that would pose a long-term security threats to its territorial integrity. Turkey’s concerns about this development and calls for a safe zone were left unanswered until the recent deal was announced with the United States. This signaled the first public affirmation of the need to prioritize Turkey’s security needs as a NATO ally. However, the territorial integrity and border security of Turkey are still largely disregarded by its allies, as reflected in the hostile responses of other NATO members to Turkey’s operation.

The constant conflation of the YPG, PYD and the PKK with the broader Kurdish community, as has been the practice of international media and commentators reveals a complete lack of awareness of regional realities in the simplest terms. The YPG’s ambition to capture territory from warn-torn areas under the Syrian war’s cover the darkness, fed turmoil in the region and caused millions of people to be displaced.

Turkey now hosts almost four million Syrian refugees. Despite the abundant number of refugees compared with other states, such Germany, Turkey has shown the most welcoming response to hosting refugees fleeing the Syrian crisis. However, the latest developments undeniably bring both domestic and international problems for Turkey. Between the build-up of the YPG and Daesh (ISIS) terrorist groups near Turkey’s borders and the huge refugee population, Turkey should have taken further steps to protect its security and ensure more effective control of its borders. Across domestic and foreign policy, responding to the refugee crisis and terror threat become a sovereignty problem of increasing concern to the Turkish public. The creation of safe zone and the push back of terrorists from its southern borders became an obligation.

The previous and recent military operation of Turkey occurred in such a context. Turkish officials repeatedly declared that the territorial integrity of Syria will be protected and the only aim of the operation was to prevent the creation of terror corridor and to establish a safe zone for refugees. Therefore, calling it an invasion falls short of explaining the conditions that brought Turkey to this threshold. Indeed, the latest operation of Turkey is a matter of self-defense. The recent pause in Turkey’s operation in response to the YPG leaving the 20 mile deep safe zone demonstrates that Turkey is sticking to its declarations. Degrading the operation to the level of a leader’s ambition, or portraying it as an invasion is both inaccurate and lazy. Unfortunately, this has become a frequent feature of Western media analysis of Turkish foreign policy. Regardless of the government, assessing foreign policy over time ensures more accurate assessment. Allowing a zone full of terrorists at its southern borders is an unacceptable condition for Turkey and any sovereign state would not accept it. Thus, the Operation Peace Spring is a matter of border security to protect the sovereignty of Turkey rather than the nonsense argument of invasion.

Sümeyye graduated from the Department of International Relations at Istanbul University in 2014. In 2018, she received her master's degree from Brunel University London with a thesis on ‘The Organisation of Islamic Cooperation and Iran-Saudi Rivalry’. She is particularly interested in IR Theories and Middle East Politics.