Over 1,350 terrorists neutralized in Afrin operation

On Monday 12 February, the Turkish Armed Forces announced that a total of 1,369 PKK/KCK/PYD-YPG and Daesh terrorists have been “neutralized” since the launch of Operation Olive Branch in Syria’s Afrin region. 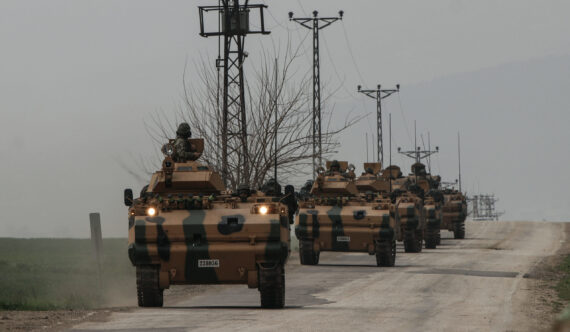 On Monday 12 February, the Turkish Armed Forces announced that a total of 1,369 PKK/KCK/PYD-YPG and Daesh terrorists have been “neutralized” since the launch of Operation Olive Branch in Syria’s Afrin region.

Turkish authorities often adopt the word “neutralized” to imply the terrorists in question either surrendered or were killed or captured.

In a published statement, the Turkish General Staff said that the airstrikes conducted by the Turkish Armed Forces overnight destroyed 15 terrorist targets used for shelter as well as ammunition depots and weapon pits.

“False peace only postpones conflict”: An Interview with Danny Morrison of the Bobby Sands Trust

According to information gathered from the region, 103 PKK/KCK/PYD-YPG and Daesh terrorists were neutralized on Sunday.

Operation Olive Branch was launched on January 20, 2018, with the aim to secure the Turkey-Syria border and to grant Syrians the right to live free of terror.

Also Read
Turkish security forces seize landmines in Afrin
We use cookies to optimize your online user experience. To learn about our use of cookies and how you can manage your cookie settings, please see our Privacy Policy. By continuing to use our site you are excepting our use of cookies.Accept Cookies & CloseMore Info