Palestine is a sovereign state, with East Jerusalem as its capital

The OIC final Istanbul communique declared that the bloc recognizes Palestine as a sovereign state, with East Jerusalem as its capital. 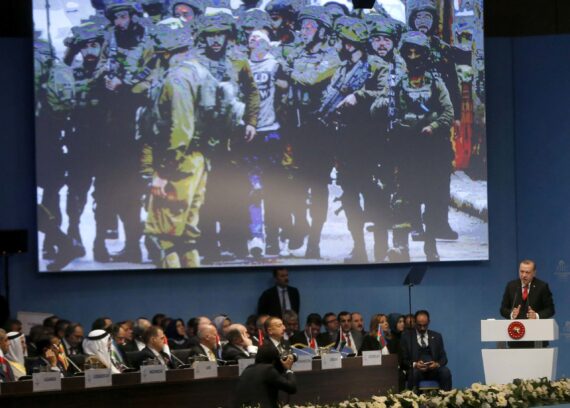 President Erdogan during his speech at the OIC Jerusalem Meeting in Istanbul, December 13, 2017. Anadolu Agency

In response to US President Donald Trump’s “recognition” of Jerusalem as the capital of Israel, Turkish President Erdogan – also acting as the Chair of the Organisation of Islamic Cooperation – called for members of the OIC to gather in Istanbul.

During the OIC Jerusalem Meeting, which was held in Istanbul on 13 December, the Turkish President condemned Trump’s decision and claimed this move as a “violation against the historical dignity of Jerusalem.”

Making reference to the unjust systematic regulations of the UN, before proceeding in his speech, Erdogan underlined that while this move was against international law, the US has the power to veto any resolution made by the UN Security Council.

Thanking countries, and the Pope, who retained their support to such a decision, Erdogan stated that “Trump’s decision has only been supported by Israel, which is occupying Jerusalem.”

While underlining that the US decision has only shot dead a so-called “peace process,” the Turkish President presented OIC member states a graphical representation of how the Israeli occupation in Palestine has been growing since 1947.

During various reports from the protests that broke out across the occupied lands, Erdogan made reference to the 14-year-old Fawzi al-Juneidi, who was blindfolded, surrounded by around 20 Israeli soldiers and taken into custody.

Showing member states a picture of Juneidi, Erdogan stated: “In addition to being an occupation state, Israel is a terror state.”

While it is rare for any head of state to call Israel an “occupying” power, let alone “terror state,” Erdogan, referring to the case of Juneidi, asked “How can I not say this, if this is not terror, or occupation, then what is this?”

Listing the crimes committed by the Israeli government, including the increasing illegal settlements, the Turkish President stated “Trump’s decision to recognize Jerusalem as the capital of Israel does nothing but award Israel for its occupation policies.”

World doesn’t turn around the US

Referencing that the UN currently has 196 members, the Turkish President further criticized the US administration for assuming that they can make such a decision on their own.

“The UN has 196 members, and the remaining 195 members will react to this decision [to recognize Jerusalem as the capital of Israel.]”

“As the US you may be a strong country, you may have nuclear missiles, planes and weapons, but this does not mean that you are strong. You’re only strong if you’re right. If you’re not right, you can never be strong.”

Meanwhile, Erdogan highlighted that “other issues in the region will not make us forget Palestine” and that “Without finding affair and sustainable solution to the Palestine issue, we cannot talk about peace and stability in the region.”

Acknowledging that Jerusalem is sacred for all three religions – Islam, Christianity and Judaism – President Erdogan repeatedly emphasized that the Al-Aqsa Mosque, the Dome of the Rock and the 144 hectares of land in its surroundings belong to the Muslim world.

Finally, before finishing his speech, President Erdogan reminded the Palestinian political sections in occupied Palestine to “solve their problems within themselves and act in unity against this test,” claiming that Palestinian unity has become a “must for them.”

To finish off his words, Erdogan reminded the audience of the words of Selahaddin Eyubbi – the conqueror of Jerusalem: “Those that fight with their friends, cannot beat their enemies.”

No room for US in peace process

Echoing comments made by President Erdogan, Palestinian President Mahmoud Abbas also insisted that Jerusalem be recognized as the capital of Palestine.

In recognizing Jerusalem as the capital of Israel, the US clearly demonstrated its color, which is why Abbas stated “We will never allow the US a role in future peace processes.”

Abbas added that the Palestinians “did not want American mediation anymore.”

The Palestinian president, underlining that Jerusalem “is and will always be the capital of Palestine,” stated that “Peace will not come unless Jerusalem is recognized as Palestine’s capital.”

OIC Secretary General Yousef bin Ahmad Al-Othaimeen also reiterated his call on countries which do not recognize Palestine as a sovereign state to do so.

The OIC final Istanbul communique declared that the bloc recognizes Palestine as a sovereign state, with East Jerusalem as its capital.