Former president of the World Trade Organization Pascal Lamy, in his recent interview to France Inter TV, became a complainant against Russian media outlets by alleging that there is an editorial alliance between these outlets which works to undermine the EU. 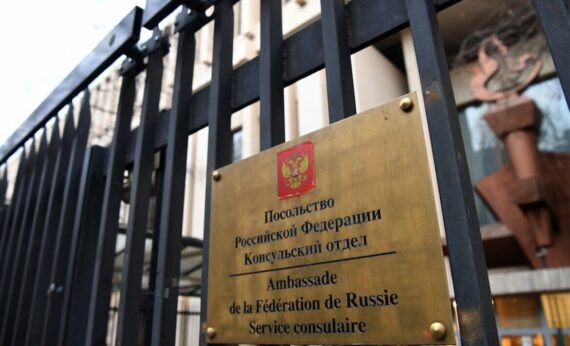 Former president of the World Trade Organization Pascal Lamy, in his recent interview to France Inter TV, became a complainant against Russian media outlets by alleging that there is an editorial alliance between these outlets which works to undermine the EU. Lamy is not the only one who complains about Russia: the US, European Parliament, Germany, and even France, which is in a presidential campaign right now, do so.

According to the complainants, the most important tool for Russia in destabilizing the EU is the Russian media. Russia sometimes employs the “fake news” method; “For instance, they spread disinformation in August to prevent Sweden’s NATO partnership.” Or “They are resorting to black propaganda news which aims to dissolve the EU.” Moreover, “They are undermining political figures with baseless rumors.” The European Parliament has even passed a resolution on these accusations in November. In the resolution, they signified the presence of anti-European propaganda in Russia, and asserted that Russia was utilizing all aspects of its media to do so, through “so-called” outlets like Sputnik and Russia Today, along with trolls. While underscoring that Russia is destabilizing the Old World by supporting far-right movements and populist parties in Europe, the resolution addressing Russia’s alleged activities interestingly also included remarks about the threat posed by jihadist terrorist organizations.

According to statements by Western officials, their intelligence agencies and NATO, the Russian threat to the EU isn’t limited to the utilization of post modern media tools. Several months ago, talking to the British daily The Times, former NATO Joint Forces Commander Richard Barrons said “Russia has the power to dispatch tens of thousands of soldiers to the territory of the EU with the support of its air and naval forces within 48 hours.” Barrons went on to say: “NATO would lose some of its territory along with the total control over the seas and the air while 28 member countries try to agree.”

Recently, in the program called Avenue l’Europe which is aired on the France 3 TV channel, a similar topic was discussed. It was signified that the tension between Russia and Europe rose to a level that wasn’t seen much since the Cold War. Moreover, whether Moscow’s footsteps should be taken seriously by Europe was opened to discussion with interviews held in Poland, Lithuania, and Russia.

So, is the risk of a war between the EU and Russia real? This question was also asked, and former French Prime Minister Dominique de Villepin responded: “Saying the risk of war doesn’t exist today is nonsense. Still, the risk isn’t quite here; both sides have to make more and more mistakes to reach there. However, there is an instance which reveals that this situation is valid for both parties: the Ukrainian and Crimean crises.” Answering the questions of Ouest France, Villepin also offered certain countermeasures, but that’s a discussion for another time.

The news and statements by officials suggest that Russia is trying to undermine the EU by attacking Germany and France, the two major countries of the EU which are also the founders of the organization. Around the end of last year, the German domestic security agency Federal Office for the Protection of the Constitution stated that Russia was employing cyber espionage which aimed to weaken and destabilize Germany. Moreover, the risk of a new Cold War was also signified. According to the German officials and the German media, on the other hand, Russia is trying to manage the public perception and manipulate the German public through their media outlets. For instance, “Lisa, a German girl of Russian descent notified the police that she was the victim of a rape. A time after, the Russian media made news which claimed that the rapists were a group of immigrants. Several protests in various cities of Germany were held with the support of neo-Nazis.” It was later revealed that the girl’s statement was nothing but a lie.

In France, which is going through the presidential campaign process, the Socialist President Hollande and Foreign Minister Jean Marc Ayrault voiced their complaints about Russia last week. Ayrault expressed that Russia’s cyber-attacks were unacceptable and that these attacks were focused on pro-EU candidates: “France and the French people will never accept an election which will be dictated by Russia via disinformation and cyber-attacks.” he said.

Before the official statements of both the president and the foreign minister, there were numerous news stories on Russia’s interference in the elections. The weekly satirical magazine Canard Enchaine wrote that the French Foreign Intelligence Service DGSE had found out the Kremlin was helping certain candidates.

Regarding how the Kremlin is helping certain candidates, while sabotaging others, the allegations are the following. The polls until January 27 were showing that Marine Le Pen and François Fillon had the lead. However, when it was revealed that Fillon had put his wife and children on the payroll through imaginary jobs (which is a rooted tradition in France), the independent socialist candidate Emmanuel Macron came to the fore. Nobody talked about Russia’s interference during the scandal which cost Fillon the presidency. However, according to the allegations, as Macron started to lead the race, Russia simultaneously started its own manipulations. Sputnik and Russia Today first claimed that Macron was leading a double life and he was financed by an affluent gay lobby. Later, they published news which implied that the former Minister of Economy Macron had strange relations with US banks. Moreover, Assange, the founder of Wikileaks, gave a statement to Izvestiya daily which claimed that there were interesting pieces of information about Macron in Hillary Clinton’s e-mails.

After all of these events, the Washington Post commented that the Russian media was trying to affect the presidential elections in France by spreading rumors. Ferrand and Griveaux, who are the campaign spokespeople for Macron, complained about “the influence of websites which are controlled completely by the Russian state and the cyber attacks of Russia.”

On the other hand, the leader of Front National, Marine Le Pen, who is accused of being financially and morally supported by Russia, didn’t even refute that they took on a loan from a Russian bank, as French banks didn’t grant the credit. “Are you saying that we have to position ourselves according to the bank that we took a loan from?” she said. However, she later rejected an alleged loan of €28 million from a Russian bank for her party. Meanwhile, Le Pen not only had approved Russia’s annexation of Crimea, but also had condemned the EU’s and the US’ sanctions against Russia.

French journalist Nicolas Henin, the author of the book La France Russe, in a recent TV interview, explained that “Putin’s Russia supports populist, isolationist and sovereignist movements” and added that “even though Macron doesn’t have a political discourse which is against Russia, Fillon’s and Le Pen’s political discourses are more attractive for Russia.” Henin added that “Russia is actually targeting the EU. Macron being relatively less Euroseptic in comparison with the other candidates makes him a target.” A similar comment was made by Ferrand, who is a campaign managers for Macron: “Macron wants a Europe that can stand tall against Russia, while the other candidates have friendlier relations with Russia.”

According to the US intelligence agencies, “Emmanuel Macron should not take these allegations lightly.”

Could these official statements and news stories be interpreted as paranoia? Definitely not! Is it possible to undermine the EU or any country by spreading disinformation, employing cyber-attacks or financing certain parties? It seems possible, as perceptions managed by disinformation are extremely effective. Example? Take Turkey sending weapons to Daesh or Fetullah Gülen’s organizations being innocent non-profits, or Erdoğan wanting the presidential system to become a dictator and for this reason masterminding the July 15 coup attempt and many others. Turkey has suffered and continues to suffer because of the disinformation spread by media in various countries.

Nevertheless, the EU should not be afraid: the dogs bark, but the caravan goes on, as the saying goes saying goes.