Saudi Arabia and Israel are following common policies especially on issues related to Iran and the Muslim Brotherhood. Although the two states do not have any diplomatic relations, the presence of a covert alliance between them is indubitable. 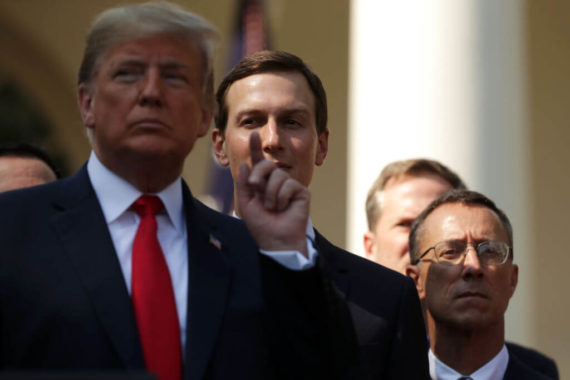 Undoubtedly, Israel is experiencing its most eased period in regional politics over the past few years, which is partly due to the positive trajectory of its relations with Saudi Arabia compared to previous years. Although the two countries abstain from having official contact, it is certain that there are various factors and instruments helping to build a common strategy between the two. The most important factor among all is the role played by the U.S. leadership in this context. Following his inauguration in January 2017, U.S. President Donald Trump made his first international presidential trip to Saudi Arabia, after which he visited Israel. Trump’s son-in-law and senior advisor Jared Kushner, meanwhile, coordinates the actors close to Washington in the region along with designing the U.S.’ regional policies. Trump and Kushner are playing a crucial role in the coordination between Saudi Arabia and Israel.

During the early years of the state of Israel, Saudi Arabia did not display a friendly approach to Tel Aviv. Following the foundation of Israel, the Saudi administration adopted negative policies towards Israel, defined the country as the enemy in its backyard and made ARAMCO authorities promise that they would not sell oil to Israel. Despite that, Israel avoided being at odds with Saudi Arabia. As relations between the two countries gradually moderated, the threatening language started to disappear. This situation became clearer especially in the aftermath of the 1990s, when Saudi Arabia started to follow parallel policies to the U.S. in the Middle East.

Is there a covert alliance between Saudi Arabia and Israel even though they do not have any diplomatic relations?

Lately, Saudi Arabia’s Crown Prince Mohammad bin Salman, who is de-facto ruling the country, explicitly recognized Israel. In an interview he gave to Atlantic a few months ago, Mohammad bin Salman said that the Israeli people have the right to live in their own territory, thus acknowledging that Riyadh has developed a new form of a relationship with Tel Aviv. The first question coming to mind at this point is whether there is a covert alliance between the two countries even though they do not have any diplomatic relations and are considered as enemies.

Saudi Arabia is among the founding members of the Arab League, which is an embodiment of the anti-Israel stance as it targets to protect the rights of the Palestinian state and people. However, the Saudi administration did not take a step that would impede the foundation of Israel. Arabs reacted against Saudi Arabia during the Arab-Israeli wars on the grounds that Saudi Arabia did not give an effective fight against Israel. By providing symbolic support to the armies fighting to defend Palestine in the wars of 1948, 1967 and 1973, Saudis averted the expansion of the anti-Israel Arab front.

In his book entitled The Birth of Israel: Myths and Realities, Simha Flapan underlines that Saudi troops never confronted the Israeli security forces whereas the fronts against Israel mostly comprised of Egyptian troops. Likewise, Saudis also provided symbolic support to the 1967 war. Although the inventory of the Arab states included a total of 250 thousand soldiers, 2 thousand tanks and 950 fighter jets, Saudis only sent 4.500 soldiers, 40 tanks and 10 jets to the inventory. Similarly, Saudi Arabia sent only 1.500 soldiers and a few jets to the 1973 war, which favored Israel instead of Arab forces.

Israel and Saudi Arabia share common interests and have cooperated in some critical regional issues.

The two countries share common interests and cooperate in some critical regional issues. For instance, both Saudi Arabia and Israel pursued the same policy towards Gamal Abdel Nasser, whose popularity soared during the 1960s. During the Yemeni Civil War, which made its mark on the Middle Eastern political history and is characterized as the “Arab Cold War”, Nasser backed republicans whereas Saudi Arabia supported the Zaidis. Tel Aviv’s approach to the issue is particularly worth noting. Throughout the war, Israel provided intelligence and security support to Saudis. In an operation known as Mivtza Rotev, Mossad agents provided aid to Saudi Arabia.

During the 1980s and 1990s, Saudi administrations endeavored to normalize relations with Israel. King Fahd and King Abdullah shared their plans in this regard with international public, displaying the positive attitude of Saudi Arabia. Besides, Saudi administrations mostly backed the agreements accepted by Israel on the Palestinian issue while keeping their distance from Palestinian resistance movements.

Israel and Saudi Arabia became two important components of the U.S.’ Middle East policy in the aftermath of the 9/11 attacks in 2001, which led the two countries to develop closer ties and act in coordination in regional policies. Saudi Arabia sided with Tel Aviv in the 2006 Israel-Hezbollah War and adopted common policies with Israel during the Arab revolutions that started in 2011. In 2012, ARAMCO’s computers cyber-attacked by Iranian hackers were restored by Israeli software developers. Also, Tel Aviv and Riyadh decided to consolidate their cooperation due to the concern that Iran’s influence in the region might increase following the nuclear deal named Joint Comprehensive Plan of Action, which was signed in July 2015.

Israel and Saudi Arabia became two important components of the U.S.’ Middle East policy in the aftermath of the 9/11 attacks in 2001.

Senior officials from Saudi Arabia have been increasingly voicing their wish to normalize relations with Israel. In an interview he gave to Israeli newspaper Haaretz in 2015, Saudi Arabia’s former intelligence chief Prince Turki al-Faisal said that a two-state solution is hard but possible, showing his inclination to Israel’s position. Faisal extended an olive branch to Israel by saying: “Imagine if I could get on a plane in Riyadh, fly directly to Jerusalem, get on a bus or taxi, go to the Dome of the Rock Mosque or the Al-Aqsa Mosque, perform the Friday prayers, and then visit the Western Wall and the Church of the Holy Sepulchre.”

The same year, retired Saudi General Anwar Eshki met the Israeli Foreign Ministry Director-General Dore Gold and announced that they decided to go public about the relations between the two countries. In 2016, Turki al-Faisal met Israeli General Yaakov Amidror in a meeting organized by a pro-Israel think-tank and issued moderate messages. Again in 2016, Anwar Eshki, a senior general in the Saudi military, visited the Israeli parliament Knesset with a delegation and gave messages of peace and friendship. In August the same year, former Israeli minister and rabbi Michael Melchior said that Israeli citizens would be able to visit Saudi Arabia soon.

In October 2017, Saudi Arabia’s former justice minister Muhammad bin Abdul Karim Issa and former education minister Khalid bin Muhammad al-Angari visited a synagogue in Paris and expressed positive remarks on Israel. Towards the end of 2017, Israeli Chief of General Staff Gadi Eizenkot said in an interview that he gave to Saudi Arabian Elaph newspaper that they are ready to share intelligence with all moderate Arab states, particularly with Saudi Arabia, in order to balance Iran’s influence. Again in 2017, during the period when Israeli Prime Minister Benjamin Netanyahu stated that relations between Arab states and Israel were at a historic high, an Israeli radio named Voice of Israel alleged that an unidentified Saudi royal discreetly visited Israel.

In May 2018, Saudi Arabia ended a 70-year-old ban and allowed Air India to use Saudi airspace in New Delhi-Tel Aviv flights. In April 2018, Mohammad bin Salman remarked that Israelis and Palestinians have the right to found their own states, giving the signals of recognizing Israel for the first time in the history of Saudi Arabia. Israeli media, meanwhile, kept praising Salman, hinting that the two countries can establish closer ties under his rule.

Iran and the Muslim Brotherhood

Lastly, it would be useful to mention perceptions of common threat in order to understand why Israel and Saudi Arabia got closer in the period following the 2011 Arab revolutions. A common point for the two countries is their antagonism to the Muslim Brotherhood and Iran. In this sense, both countries regard Iran as a primary threat. The U.S. invasion of Iraq in 2001 reshuffled the power balances in the region in favor of Iran, which caused a growing competition between Saudi Arabia and Iran and intensified the security and intelligence cooperation between Saudi Arabia and Israel. On the other hand, the Muslim Brotherhood’s possibility of becoming a key actor in Egypt and the region’s politics following the 2011 Egyptian revolution worried both Israel and Saudi Arabia. This movement’s potential to change the political structures of significant actors in the region, such as Tunisia, Jordan, Syria, Libya and Yemen, led to some disparities in regional politics. At this point, Riyadh and Tel Aviv cooperated and adopted a common stance against the change of the regional order in favor of Ikhwan.

Saudi Arabia and Israel are following common policies especially on issues related to Iran and the Muslim Brotherhood.

The two actors have different reasons for their antagonism to the Muslim Brotherhood (Ikhwan). While Ikhwan poses a threat against the security of the regime for Saudis, Israel sees Ikhwan’s Palestinian offshoot Hamas as a national security threat. In this sense, Ikhwan coming to power after the Egyptian revolution as an actor with political mobilization potential accelerated the Saudi-Israeli convergence. Saudis financed the July 3 coup and listed Ikhwan as a terror group. Israel, meanwhile, closed the local offices of Al Jazeera, which is a media outlet of Qatar, one of the countries supporting Ikhwan on regional and global scales. Consequently, the moderation in the discourses of both countries was interpreted as a sign of a convergence.

Saudi Arabia and Israel are following common policies especially on issues related to Iran and the Muslim Brotherhood. In addition, a number of motivations such as the competition with Turkey, the fight against regional threats, the security of the regime and relations with the U.S. lead to the continuation of the Riyadh-Tel Aviv coordination. Therefore, although the two states do not have any diplomatic relations, the presence of a covert alliance between them is indubitable.