Peace to Prosperity or Peace for Jared Kushner?

Although the real motivation of the “Peace to Prosperity” workshop was presented to be a solution for the Palestine-Israel conflict, its main purpose was to prepare a political venue by which Israel’s occupation policies can be institutionalized. 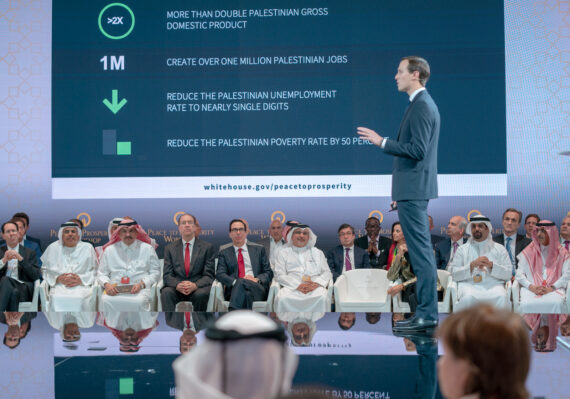 Bahrain’s capital Manama hosted the “Peace to Prosperity” workshop that aimed to bring a new framework to present new financial instruments to develop Palestine and Gaza. Despite the stated aim, the workshop received wide criticism from not only Palestinians, but also other Arab countries that considered the meeting as part of a so-called “Deal of the Century.” The agreement was previously proposed by Jared Kushner, Middle East advisor to U.S. President Donald Trump and aimed to resolve the decades-long conflict between Israel and Palestine.

In the opening speech of the workshop, Kushner claimed that the so-called “Deal of the Century” is actually the opportunity of the century that can pave the way for a peaceful Middle East. He stressed that together with Arab partners, the U.S. administration is offering a 50 billion USD aid package for Palestine and its neighbouring countries, in order to help them create jobs, improve infrastructure and develop living conditions. Despite the positive discourse, Kushner’s initiatives received strong reactions. His proposal, which does not offer a state for Palestinians, has been strongly refused by the Arabs who have been living under Israeli occupation for decades. For this reason, the Manama workshop was seen as an attempt to prepare Palestinians for a secret deal that would eventually lead them to lose their centuries-long homeland.

Kushner’s “Deal of the Century” has been strongly refused by the Arabs who have been living under Israeli occupation for decades.

Therefore, although the economic development of Palestine was presented as the main agenda of the workshop, the most important goal was to garner support from Arab leaders for Kushner’s “Middle East Peace Plan.” The participants of the meeting is a clear indicator as to how the U.S. administration is forcing Gulf monarchies, particularly Saudi Arabia and the United Arab Emirates, to support Washington’s plans towards the Israel-Palestine conflict. The Manama summit is also supposed to serve to strengthen this alliance led by the Trump Administration.

In addition to the host Bahrain, a number of other Arab countries such as Saudi Arabia, UAE, Jordan, Qatar, Morocco, and Egypt participated in the summit, while Iraq and Lebanon opposed the meeting. Algeria, Libya, Somalia, Oman and Kuwait did not clearly state their position on the meeting, but they were reluctant to providing public support.

The “Peace to Prosperity” Workshop led by the U.S. in Bahrain was an attempt to prepare Palestinians for a secret deal.

It was also noticed that Palestine and Israel – countries that would be directly affected by the meeting – did not participate on an official level. While the Palestinian side declared its reaction to both the Manama meeting and the Deal of the Century, Israeli representatives did not participate as Tel-Aviv does not have diplomatic relations with Manama. However, many Israeli businessmen and journalists as well as Jewish religious figures from the U.S. and Canada attended the meeting.

Some of these rabbis organized a religious ceremony in a synagogue in Bahrain, which was also attended by Jason Greenblatt, Trump’s Special Envoy for the Middle East. The images of that ceremony were widely shared on social media, where Greenblatt and rabbis were seen singing “The People of Israel Live” covered with the symbols of the Jewish faith.

One of the highlights of the workshop is the low profile participation from Arab countries. This situation shows the concerns of these countries and the fear that they may cause domestic backlash. As a matter of fact, protests were organized in some countries including Morocco, Lebanon and Jordan, due to the policies of their governments towards the conflict between Israel and Palestine. Protesters also criticized Washington’s Middle East policies and the recent summit held in Manama, Bahrain.

There was low profile participation from many Arab states to the workshop held by Kushner in Bahrain as these states feared that their stance may cause domestic backlash.

Public figures, opinion leaders and politicians also reacted to the Bahrain meeting. Walid Jumblatt, the leader of the Progressive Socialist Party in Lebanon, criticized the stance of the Arab countries towards the Palestine issue and considered the Bahrain summit as a step in the process of Arab countries selling Palestine to Israel and the United States.

Observers also notice the special attention of Bahraini organizers to host Israeli participants, particularly from business and media circles. Even though Bahrain and Israel does not have diplomatic relations, a number of Israeli businessmen and journalists were invited to a meeting, probably for the first time over half a century. In his first interview of its kind to an Israeli newspaper, Bahrain’s foreign minister Sheikh Khaled al-Khalifa stated that his country supports Israel’s right to defend itself from threats in the region and that there can be official relations between the two countries in the coming period.

Although the real motivation of the “Peace to Prosperity” workshop was presented to be a solution for the Palestine-Israel conflict, its main purpose was to prepare a political venue by which Israel’s occupation policies can be institutionalized. Despite the heavy pressure from the U.S. government, the participation of Arab countries at the Bahrain summit was limited due to the possible backlash Arab states could receive from their domestic polity. Another reason was the lack of official representatives from both Israel and Palestine, the two countries that would be directly affected by the meeting. On the other hand, this Bahrain meeting, rejected by leading Muslim-majority states such as Turkey and Iran, is a continuation of the U.S.’ unilateral efforts to impose its agenda for the Middle East. For this reason, both the Bahrain meeting and the deal of the century will continue to be seen as an illegitimate initiative not only for the Palestinians but for the entire Islamic world.