Pentagon dismisses Trump's "rumours" of an exit from Syria

While President Trump’s remarks have been contradictory, it seems the military leaders with experience in the failures of Iraq and Afghanistan hope to stay with suggestions of their being a ‘robust post-conflict’ agenda. 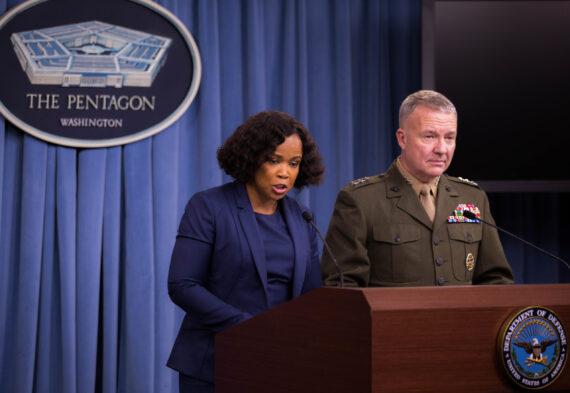 On Thursday last week, the Pentagon dismissed claims of a U.S. exit from Syria as being “rumours,” conveying instead that the fight against Daesh in Syria was not over.

According to senior U.S. officials, President Donald Trump had instructed military leaders to withdraw U.S. troops from Syria, suggesting that U.S. strategic goals in Syria do not include longer-term stability or reconstruction efforts. Trump had also previously suggested that the Syrian war was a mistake during his campaign period, as well as more recently indicating that a U.S. military exit will happen “very soon.”

Nonetheless, while Trump maintains Syria as being a financial drain on the U.S. economy and burden on interests not in line with his ‘America First’ policy, mostly blaming the previous administration for not having crossed the stated “Red Line In The Sand,” Pentagon spokesperson Dana White, on Wednesday the following day described a U.S. plan to withdraw troops from Syria as “rumours,” with the fight against Daesh not yet over.

Contrary to Donald Trump’s statements of a rapid U.S. military exit within six months, sources have cited an increase in military presence in northern Syria, reporting that two more military outposts have been set up in the Manbij region. It is estimated the U.S. now has up to 11 military bases in northern Syria.

While President Trump’s remarks have been contradictory, it seems the military leaders with experience in the failures of Iraq and Afghanistan hope to stay with suggestions of their being a ‘robust post-conflict’ agenda. Some high ranking U.S. military leaders have insisted that “once the small [Daesh] footholds have been cleared out in eastern Syria, the U.S. will require a footprint after the fighting stops to deter further attacks against the United States.”

The U.S. financial and military aid towards the PYD/YPG in northern Syria has caused much friction between Turkish-American relations. Being a Syrian offshoot of the PKK, an outlawed terrorist organization recognized by Turkey, the European Union and the United States, the U.S. have used the YPG in their ‘fight’ against Daesh, but more importantly to decrease Russian and Iranian influence in the region, at the expense of supporting an organization also linked to terrorism.

With recent Turkish counter-terrorism operations in Afrin, north-western Syria, clearing what had become a strategic location for YPG cross-border attacks on the provinces of Hatay and Kilis, Turkey has made it clear they will now be directing their efforts towards other YPG/PYD controlled areas, most specifically the U.S. held region of Manbij. Causing apprehension towards a possible confrontation between Ankara and Washington, a Turkey-U.S. working group was set up to alleviate concerns and cooperate on a peaceful solution. The first meeting was held on March 8, 2018.

However, diplomatic sources recently signified that the next Turkey-U.S. working group meeting on Manbij will be put on hold until May. Waiting until Mike Pompeo replaces former Secretary of State Rex Tillerson, the impromptu shift in the White House has dampened Turkish-American cooperative progress and caused speculation on whether Pompeo will continue, or even adhere to Tillerson’s ‘constructive’ steps in finding a solution between the two NATO members in Manbij.

Where an immediate U.S. military exit has been no more than rhetoric to appease domestic concerns, as well as provide ground for Trump to demand payment from those that wish for the U.S. to maintain presence in Syria, signalling out Saudi Arabia, French President Macron has kept close contact with the White House. After having welcomed the Syrian Democratic Forces (SDF) to the Elysee Palace two weeks ago it was proposed Macron looks to send an unspecified number of troops to the French bases in Manbij and assist the PYD who make up an overwhelming percentage of the SDF.

External intervention becoming ever more likely after the Douma chemical attack on civilians, with Trump and Macron calling for a “strong, joint response” towards the Assad regime, British cooperation and involvement has also come to light, with Trump securing a $500 million deal in relation to the drone development and maintenance project entitled the ‘Falcon Project.’

Although it may appear Trump’s rhetoric sympathizes with U.S. military personnel, striving for their ‘return home,’ the Pentagon, alongside the high ranking military leaders intent on countering Russia and limiting Iran in the region will maintain their presence in Syria for the time to come. Alienating Turkey, U.S. insistence to further build a military presence while assisting the PYD has paved the way for Turkey to nurture stronger bi-lateral relations with Russia and build collaborative relations with Iran based on mutual concerns of terrorism.

While Trump personally may want a Syria exit soon, it is evident that his personal opinions bare no weight within the interests of the Pentagon. It is also debatable whether elected individuals in the U.S. actually have a say with regards to foreign policy interests.