The PKK does not only announce their acts with the notes they leave near the victims’ bodies. They also claim responsibility for their attacks via their media outlets, including a number of websites. One of them is Germany-based Yeni Ozgur Politika newspaper that is freely distributed and sold across Europe. 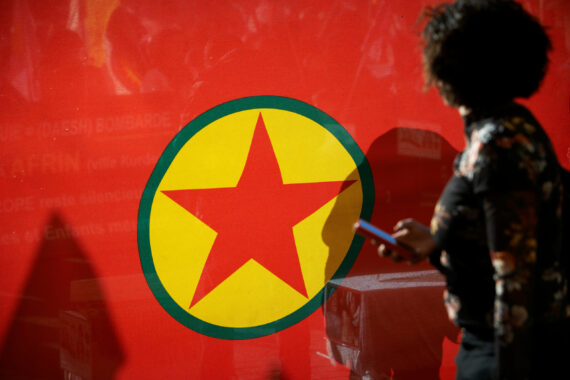 Supporters of the PKK terrorist organization hold a demonstration in France. Alain Pitton/NurPhoto via Getty Images

Last week, a father and a son who were breeding livestock for living were killed by a group of PKK militants in the Yalimli village of Diyarbakir’s Lice district. The father was 48 years old while the 24-year-old son was mentally challenged. According to the testimonials of the family’s relatives, the father, namely Remzi Guler, went to water their garden in Lice nine days ago along with his son Mahmut Guler. After a search that went on for nine days, the bodies of the father and son were found on Friday and it was revealed that both were shot to death. The PKK left a note near the bodies as is their custom.

The PKK had also left a note near the body of Mevlut Bengi, whose body was hung on a lamp post by the terror group members after being killed two weeks ago. They accused Bengi of acting as an informant and co-conspirator and stated that they executed him and hung him on the lamp post as a warning to others. Bengi was a 46-year-old man running a small grocery store in Turkmen village of Agri’s Dogubeyazit district and was a father of 11 children. The PKK militants abducted Bengi one day before the June 24 elections and killed him two days after.

Today the PKK continues to kill Kurdish people who do not support the terror group regardless of whether they are children or disabled. For instance, PKK militants killed a man named Osman Balic and his 3-year-old daughter Revsen on the grounds that Balic left the PKK. In another instance, they killed someone they accused of co-conspiracy in Cizre, filling his mouth with banknotes.

Of course, the PKK does not only announce their acts with the notes they leave near the victims’ bodies. They also claim responsibility for their attacks via their media outlets, including a number of websites. One of them is Germany-based Yeni Ozgur Politika newspaper that is freely distributed and sold across Europe. But recently, the execution news that was announced on the PKK’s offshoot HPG’s website was not directly announced on Yeni Ozgur Politika. They were only referred in an article in which several insinuations were made. The article penned by Ahmet Kahraman reads: “Lately, a man named Mevlut Bengi was killed in Dogubeyazit. It is claimed that he is a public enemy and an informant working for the AKP (the Justice and Development Party).” Kahraman went on to suggest that murder was not something desirable but justified the murders of the Kurdish people who give support to the AK Party instead of the PKK. It seems that the newspaper was obliged to defend the executions rather than praising them this time as they stir up a great reaction not only across Turkey but in the region.

In fact, the PKK/KCK attack in Ankara that targeted military shuttle buses, for which the terror group’s offshoot TAK claimed responsibility, was put to captions by the same newspaper. In this attack, two PKK suicide bombers named Seher Cagla Demir and Ozgur Unsal blew themselves up at the Guvenpark bus stops located in Ankara’s Ataturk Boulevard, killing 36 people and injuring 349. The Peoples’ Democratic Party’s (HDP) presidential candidate Selahattin Demirtas’s brother Nurettin Demirtas portrayed Seher Cagla Demir by means of mythological figures and penned a lengthy article that likens her to Hercules. The article was published by Yeni Ozgur Politika. After writing an ode to the 26-year-old Demir code-named “Doğa” (meaning nature in Turkish) by employing the motifs of Greek and Roman mythologies, Demirtas finally likened her to lotus flower and went on: “Doga is Heracles. Some people deflect the issue from the main point on the grounds that death cannot be glorified or they likened the acts to the suicide attacks of Daesh. Doga cannot be defined as a suicide bomber. She is a heroine; she is a lotus flower that cannot be stained by any means.”

At the end of the article, Demirtas made a call to new suicide bombers: “Now is the time for Doga.”

On June 5, Yeni Ozgur Politika published an interview with Nurettin Demirtas, which was conducted in the place where he kept hiding. Likening PKK kamikazes to lotus flower and praising the murders, Demirtas this time asked for support to his brother, the HDP’s presidential candidate Selahattin Demirtas who is currently imprisoned. He said during the interview: “I can order dessert to those voting for the HDP and my brother on the mountains of Kurdistan,” and the interview was published with a photo portraying him while making a dessert.