PKK/PYD provided with 120 armored vehicles by US

According to information gathered by a source from Syria's Haseke province, close to the Anadolu Agency, the US army has apparently delivered combat and mine resistant vehicles via the Semalka border crossing at the Iraq-Syria border. 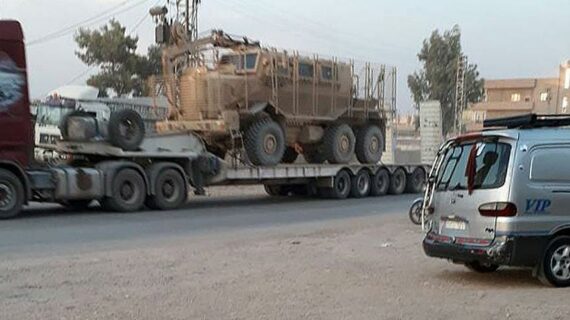 According to information gathered by a source from Syria’s Haseke province, close to the Anadolu Agency, the US army has apparently delivered combat and mine resistant vehicles via the Semalka border crossing at the Iraq-Syria border.

It is reported that the source added that the terrorist organization plans to dispatch the vehicles and hundreds of militants to the Afrin district in Aleppo province, near the Turkish border.

The PKK/PYD needs to use the Aleppo corridor controlled by the Bashar al-Assad regime and Iran-backed groups for delivering the vehicles.

The PYD and its military wing YPG, are Syrian branches of the PKK, which has waged a war against Turkey for more than 30 years.

Since the PKK launched its terror campaign in Turkey in 1984, tens of thousands of people – including security personnel, women and children – have been killed, including more than 1,200 since July 2015 alone.

The US and the coalition has since ignored the link between the PYD and PKK – which the US, EU and Turkey list as a terrorist group.

Turkey cites the PYD’s deep ties with the PKK in opposing the US cooperation with the PKK/PYD.

While the US accepts the PKK as a terrorist organization, it claims that the PKK’s Syrian offshoot, the PYD, us a “reliable partner” against Daesh.