The PKK terrorists chose to surrender on mass to Turkish Security Forces following the long-running urban lawlessness in Nusaybin/Mardin. This could tempt the Turkish government and security forces to give a sigh of relief, but it should not be perceived as the end of the PKK. 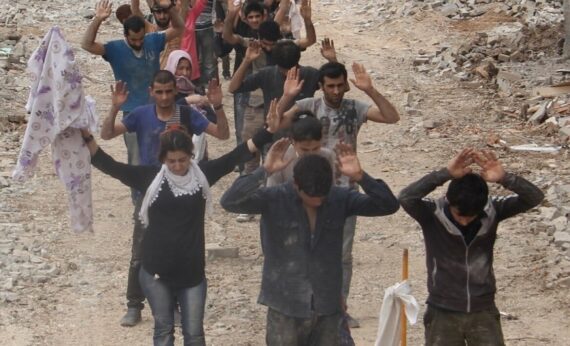 The PKK terrorists chose to surrender on mass to Turkish Security Forces following the long-running urban lawlessness in Nusaybin/Mardin. This could tempt the Turkish government and security forces to give a sigh of relief, but it should not be perceived as the end of the PKK. With its quick responsive ability, the PKK might adapt itself to the defeat but continue in violence.

SecurityBy Serhan Afacan
Once the PKK decided to confront the Turkish State in mid-2015, it clearly had a new strategy of bringing the war to the urban centers. This strategy of urban warfare was attempting to turn terrorism into an insurgency by involving the people in the violence. Nusaybin was the center for the PKK to control all urban warfare within Turkish territory.

Once the PKK decided to confront the Turkish State in mid-2015, it clearly had a new strategy of bringing the war to the urban centers.

The duration of the urban operations in Nusaybin lasted longer than the ones in Silopi, Cizre and Sur. Despite common dynamics such as urban structure, density of the civilian population and ability of the security forces, there was only one factor in Nusaybin that differed from the others: the capacity of the PKK resistance. The unique geographical location of Nusaybin, on the border with Syria, led to a high transitivity of the PKK members between Syria and Turkey. YPG forces, which had been armed, trained and equipped by the US forces to fight against ISIS, were quick to come to the support of PKK with man power, arms, ammunitions and equipment. Outside (and foreign) support enabled the PKK to reinforce its position with more man power, Improvised Explosive Devices (IED), arms and ammunition, and most importantly YPG knowledge of urban fighting.

However, in response to the PKK’s defensive challenge with direct support from a foreign territory, the Turkish Security Forces were able to evacuate the civilians from the area of operation, and conduct an offensive operation against the PKK terrorists. Operation advance was slow due to the house-to-house operations and high risk of IEDs.

Apart from the sniper dimension of the urban conflict, tactics of the security forces were to engage with IEDs and supporting fire in the streets. 200-500 kg of IEDs made of ammonium nitrate and reinforced by propane cylinders were effective enough to stop armored vehicles. In addition to IEDs, synchronized ambush and supporting fire were the main strategy of the PKK in its preparation for defensive battle. Such a well prepared urban defensive operation could not be the plan of the PKK alone considering that it has never participated in an urban conflict before.

PKK had to taste another defeat and decided to go back to mountains leaving thousands of dead members and desperate fighters in urban areas.

Security forces focused on the border security and the supply routes from rural areas in the triangle of Mardin-Midyat-Nusaybin to isolate the urban PKK fighters within Nusaybin. Deployment of the elite special operation units and precise fire support in Nusaybin, since the beginning of urban operations on March 14th of this year, suppressed the PKK fighters. PKK dared to fight with security forces in Silvan and Sur of Diyarbakir; Silopi, Cizre and Idil of Sirnak; Varto of Mus and Yuksekova of Hakkari. Before it started to confront the civilians and security forces in city centers its primary tactic was to carry out intimidation actions on the roads between the eastern provinces. Later, it tested the rural reactions of security forces along the Iraqi border to desynchronize their power and finally rurally based PKK terrorists were sent to urban areas around mid-October 2015. The PKK was not able to convince the local people to take part in an insurgency, and was defeated in all the cities mentioned above. Currently, its final resistance is taking place in Nusaybin/Mardin and downtown Sirnak.  In their latest strongholds PKK terrorists either fight to death or surrender, they tend to surrender either during period of calm and non-aggression or during the time of desperate defeat. In Nusaybin, PKK terrorists had no choice but to fight to death or surrender because of the strict security measures both in the area of operation and along the Syrian border.

PKK is a rural terror organization and has practiced rural tactics based on Mao’s infamous protracted war. Protracted war is based on the attrition of struggle in which the weaker party harms its opponent in a lot of small ways, so that the strong opponent becomes gradually weakened. PKK has been expecting the Turkish State to weaken for decades and, not being able to achieve its goals tried to confront the security force in the city centers to gain a prompt victory with the momentum of the developments in northern Syria. PKK had to taste another defeat and decided to go back to mountains leaving thousands of dead members and desperate fighters in urban areas.

PKK will find itself in a re-generation effort in Iraqi and Syrian territory. Far from creating an insurgency, the PKK yet again proved itself to be a terrorist organization.

PKK terrorists experienced the efficiency of IEDs during the urban lawlessness and they are expected to use this tactic against two different targets; motorized security units and the stationary security facilities. Roadside IEDs are explosive systems that target the security patrol vehicles, transportation vehicles and security convoys. PKK is expected to lay roadside IEDs between the city centers where the motorized security movement is high. Vehicle Borne Improvised Explosive Device (VBIED) is expected to be the second tactic that PKK might use to attack the stationary security facilities such as rural roadside gendarmerie posts, police and other military facilities in city centers. VBIEDs are expected to target the mobile security vehicles. While employing these tactics in Turkish territory, PKK is also expected to carry out armed attacks against the border security bases along the Iraqi border.

Beyond these attacks, PKK will find itself in a re-generation effort in Iraqi and Syrian territory. Far from creating an insurgency, the PKK yet again proved itself to be a terrorist organization. Insurgency is a form of control of the population, but PKK will push to hold the terrain in rural areas.