Politicization of Finance Against Turkey

Ahead of the snap election in June 2018, Turkey is under a severe financial attack. It is quite apparent that Turkey’s macroeconomic indicators are quite healthy, and it is not possible to explain the current financial pressure “economically”. 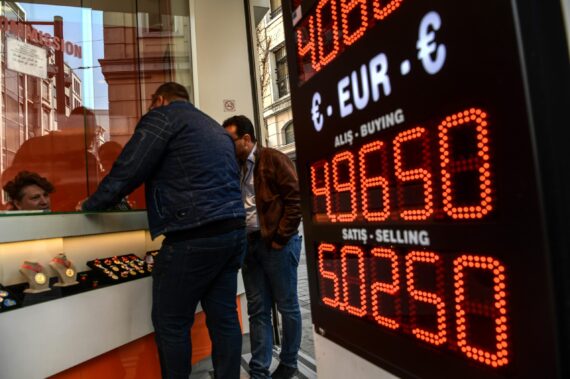 This picture is taken on April 10, 2018 in Istanbul shows a screen displaying foreign exchange rates against Turkish liras as people change their money at Istiklal avenue. Getty Images

Turkey is currently under a severe financial attack. It is quite apparent that Turkey’s macroeconomic indicators are quite healthy, and it is not possible to explain the current situation “economically”.

Attracting foreign investors relies on two main factors: the country’s economic vitality and debt ratio. Naturally, investors want to invest in countries in which they can profit handsomely. At this point, economic vitality comes into play. A country with a high growth rate has a significant potential in terms of investments as it offers high profits for firms. On the other hand, investors expect the country they are lending money to have the capacity to pay off her debts. In this respect, if a country’s debt ratio rises, its capacity to pay off her debts will decline, causing investors to withdraw their investments.

We see that Turkey has a good performance in both of these aspects. First, Turkish long-term annual economic growth rate averages out 4.8%. Moreover, despite the July 15 coup attempt in 2016, the Turkish economy grew 7.4% in the following year, showing an impressive performance and clearly demonstrating her resilience. Hence, Turkish economy is quite vital and naturally attracts investors.

Second, Turkish public debt-to-GDP ratio is around 28.5%, which places Turkey among countries with the least debt load and this ratio is much higher for most of the countries in the world. For example, France’s ratio is 97% while the U.S. and Japan hover around 105% and 253% respectively. On the other hand, Turkey’s budget deficit-to-GDP ratio is approximately 1.5%, despite being in an election year. This ratio is significantly lower than the Maastricht criterion, which is 3%. The same ratio is 2.8% for France and 2.9% for the U.K.

On the other hand, like all economies, the Turkish economy has its own problems. The biggest problem for Turkey for the last two decades is her relatively high current account deficits. However, Turkey has learnt to live with this problem as she has tried to overcome it. Moreover, Turkey’s current account deficit is considerably lower right now than previous years.

When all of these factors taken into consideration, it is clear that the steep rise in the TL/Dollar exchange rate does not have an economic explanation. Not to mention that the abrupt increase in the exchange rate would require an “equally abrupt” economic cause. We know that there is none. So we are left with politics. The only viable and “abrupt” explanation left is the “surprise” snap elections, which will be held on June 24.

So, how should Turkey respond to this severe financial attack? First, it is wrong to see policy interest rate as almost the sole monetary policy tool, as assumed widely now.  The Argentinian experience is illuminating in this respect. After Argentine Peso lost 15% of her value last month while inflation was around 25%, the Central Bank of Argentina altered the interest rate three times within a week, increasing it from 27.25% to 40%. So, what happened in the end? Argentine Peso lost another 15% of its value.

The Turkish Central Bank (TCMB) increased the de facto interest rate by 300 base points, from 13.5% to 16.5%, on May 23 in order to address the financial attack, resulting in a further tightening in monetary policy and making Turkey an outlier among emerging countries in terms of real interest rate. After the steep rate hike, TL/Dollar exchange rate decreased from 4.80s to 4.40s gradually, only to increase 4.60s again swiftly with no apparent “economic” reason.

To address this “mindless” financial attack, respective ministries, such as the Ministry of Economy, along with the TCMB should establish communication channels with citizens and try to relieve their concerns. On the other hand, both the government and TCMB ought to establish good relations with financial circles that are only economically-motivated. Achieving these, Turkey will be able to weather these financial attacks. At this point, Turkey has an important leverage: the current level of the TL/Dollar exchange rate renders Turkey a tremendously attractive country for investment.

Lastly, it should be noted that TL/Dollar exchange rate will sooner or later return to normal levels, particularly after the snap elections. The Turkish state and the TCMB’s strong communications with both Turkish citizens and financial circles that are “economically motivated” would ease up this process.