An interesting aspect of Pompeo's recent visit to the Middle East is that he prefers to hold separate meetings with each government rather than a summit that would gather some of these countries, if not all. 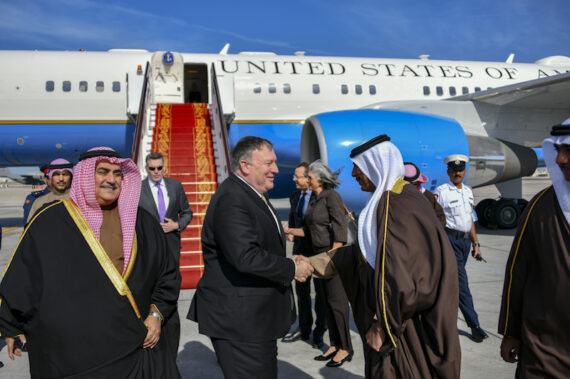 US Secretary of State Mike Pompeo continues his tour of the Middle East, which will last for 8 days and will cover 9 countries. During his visit, Pompeo will hold talks in Jordan, Iraq, Egypt, Bahrain, the United Arab Emirates, Qatar, Saudi Arabia, Oman and Kuwait. One of the interesting aspects of the visit is that Pompeo prefers to hold separate meetings with each government rather than a summit that would gather some of these countries, if not all.

There are different reasons for that. First of all, despite US having good relations with all these countries; Pompeo probably has diverse messages for each. Secondly, in a political atmosphere where sense of trust among regional countries is lost, the chief foreign policy figure of the US would probably better consult leaderships in these countries. Finally, increasing tensions among the US allies in the Gulf also prevents Pompeo to organize a summit that could gather regional actors.

Despite the occasional positive statements, the tension between Qatar and its neighbours continues, while Kuwait and Oman remain cautious about the aggressive foreign policy moves of Saudi Arabia and the UAE. Another tense relationship continues between two US allies, Turkey and Egypt, that happen to also be powerful actors in the region. Despite these challenges, the US administration believes that there are a number of issues that require close coordination among its regional allies. However, there are practical problems that the US foreign policy makers have been experiencing.

Five of the nine countries to which Pompeo will visit have no US ambassadors. This hampers US policy engagement in the Middle East and damages US reputation as the major foreign policy actor in the region.

An obvious indicator of such problems is the lack of top foreign policy agents of the US in the region. Five of the nine countries to which Pompeo will visit have no US ambassadors. The top US diplomatic positions in Egypt, Saudi Arabia, the UAE, Qatar and Jordan are still vacant, because of Trump’s ineffective foreign policy management. This is a powerful sign of the weakness in the US policy in the region. The picture illustrates that the Trump administration is not capable of producing a comprehensive strategy towards the Middle East. Lack of such actors hampers US policy engagement in the Middle East and damages US reputation as the major foreign policy actor in the region.

This is clearly the case in the US policy toward Syria as well. While being hesitant to take steps against the Assad regime, Washington has alienated Turkey by supporting PYD, the terrorist organization that operates mainly in Northern Syria. This strategic mistake by US foreign policy establishment had great damage on US-Turkey relations. Trump has realized that this form of relationship would further undermine the interests of the United States in the region and decided to reconsider his country’s position in Northern Syria. While Trump’s decision to withdraw US soldiers from Syria is considered as a positive step for Turkey, further reconciliatory steps should be taken in order to repair strategic alliance between Washington and Ankara.

Although the decision to postpone the implementation of Trump’s “deal of the century” was taken because of the coming elections in Israel, many suspect that US administration had miscalculated possible outcomes of the deal and had to cancel its implementation.

Another issue that Trump was forced to make reconsiderations about is the Israel-Palestine conflict. Trump’s solution to the issue was the “deal of the century” by which Palestinians would basically be forced to accept Israeli occupation. The deal was not accepted by Palestinians and caused significant domestic outrage in Palestine and Gaza. During Trump’s National Security Adviser John Bolton’s visit to Israel, the US Ambassador to Tel Aviv David Friedman said that implementation of Trump’s “deal of the century” was postponed. Although the decision was taken because of coming elections in Israel, many suspect that US administration had miscalculated possible outcomes of the deal and had to cancel its implementation, at least for the time being.

The incoherence of US policy towards the Middle East has recently been witnessed in Mike Pompeo’s speech at the American University in Cairo. Pompeo’s speech was focusing on how powerful American presence in the region is, describing it as a source of stability. This approach is almost the opposite version of how Trump frames his foreign policy objectives, which has been dubbed as “America First”. A further inconsistency in Pompeo’s speech can be observed in his remarks about US withdrawal from the region. Despite Trump’s recent announcement of Washington’s withdrawal of US soldiers in Syria, Pompeo weirdly commented, “We learned that when America retreats, chaos often follows. When we neglect our friends, resentment builds. And when we partner with enemies, they advance.” It is obvious that Pompeo is determined to show his skills as the top diplomat, however, as many inconsistencies in the US foreign policy reveals; he has a challenging task ahead.