“The pope missed an opportunity to reinforce his previous messages that affirmed the rights of the Rohingya to self-identify and used the name that they had chosen for themselves.” 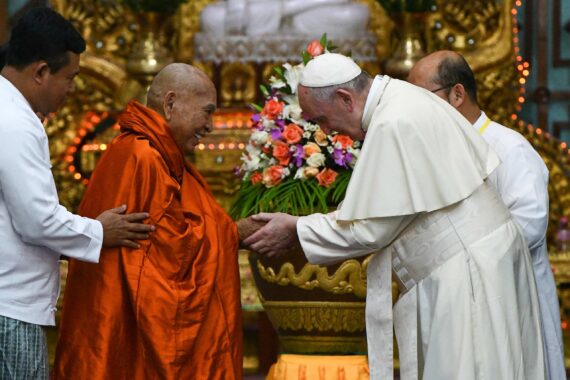 The leader of the Roman Catholic church Pope Francis visited Myanmar, the majority-Buddhist country that the US, UN and UK has accused of “ethnic cleansing” against its Muslim Rohingya people.

The pope will also visit Bangladesh, where more than 620,000 Rohingya have fled to escape what Amnesty International has called “crimes against humanity.”

Before the visit, the Cardinal of Myanmar Charles Bo had advised the pope not to use the term “Rohingya.”

“If he doesn’t use it, the international community will say something,” Bo acknowledged. “If he does use it, then it could be very bad for the military, the government and the Buddhist community.”

The Pope was publicly urged to avoid using the word seemingly out of concern that it would have negative repercussions for the Catholic minority.

The pope’s visit to Myanmar had been shrouded in speculation over whether he would refer to Rohingya directly or not.

Pope Francis on Tuesday called for respect for the rights of all of Myanmar’s ethnic groups without mentioning persecuted Rohingya Muslims or what has been condemned by the UN and US as “ethnic cleansing” directly.

On Tuesday, speaking in the capital Nay Pyi Taw, the pope referred to the continued suffering of Myanmar’s people “from civil conflict and hostilities.”

Saying that they “have lasted all too long and created deep divisions,” the pope talked of the need to “respect the rights of all who call this land their home.”

“The future of Myanmar must be peace, a peace based on respect for the dignity and rights of each member of society, respect for each ethnic group and its identity, respect for the rule of law and respect for a democratic order that enables each individual and every group — none excluded — to offer its legitimate contribution to the common good,” Pope Francis said.

The pope has already used the word Rohingya in two appeals from the Vatican this year. Previously Francis has prayed for “our Rohingya brothers and sisters.” His avoidance of the term now was seen by many as a retreat from his earlier support for the oppressed and marginalized around the world.

Many in Myanmar refuse to identify the Muslims of Rakhine as Rohingya, claiming they are migrants from Bangladesh even though they have lived there for generations.

The pope praised Suu Kyi’s efforts towards reconciliation after decades of military rule.

Suu Kyi in turn referred to the “situation in the Rakhine” and thanked those who had supported the government.

“The pope missed an opportunity to reinforce his previous messages that affirmed the rights of the Rohingya to self-identify and used the name that they had chosen for themselves,” he said.

“The Rohingya have been stripped of so many things, but their name should never be one of them,” Robertson added.

“He risks either compromising his moral authority or putting in danger the Christians of that country,” said Father Thomas Reese, a prominent American author and analyst at Religion News Service.

Rohingya, described by the UN as the world’s most persecuted people, have faced heightened fears of attack since dozens were killed in communal violence in 2012.

Amnesty International said the Rohingya and Muslims generally in Rakhine State had been subjected to “systemic social and political exclusion” for decades and accused the military of “crimes against humanity” in the last two years including murder, rape torture and forcible displacement.

Speaking in September, Bangladeshi Foreign Minister Abul Hasan Mahmood Ali said around 3,000 Rohingya had been killed in the operation.

Rohingya have faced discrimination in the predominantly Buddhist country for decades. They are deprived of citizenship and unable to access basic services.

The international community has called on the Myanmar government and military to immediately halt atrocities and allow Rohingya to return home safely.

Meanwhile in the UK, Oxford City Council on Monday evening stripped Suu Kyi of the Freedom of the City of Oxford, awarded to her in 1997.

Pope Francis on Wednesday led an open-air Mass in Yangon for more than 200,000 Catholics from across Myanmar.

The flags of Thailand, Cambodia and Vietnam in the crowd, indicated many had travelled from further afield.

From late Tuesday night, thousands of Catholics began gathering at the Kyaik Kasan stadium in Thingangyun Township to see Francis.

The pope called on Myanmar’s ethnic minorities – who have suffered decades of oppression at the hands of the military – not to give in to the desire for revenge.

“I know that many in Myanmar bear the wounds of violence, wounds both visible and invisible,” Francis said in Italian that was translated into Burmese, referring to the Karen, Kachin, Sha and Wa peoples, who make up around 40 percent of the population

He urged people to respond with “forgiveness and compassion” and added: “The way of revenge is not the way of Jesus.”

His message of forgiveness was his first public Mass in the predominantly Buddhist nation.

The pope said his priority in Myanmar was to minister to its 660,000-strong Roman Catholic community.