The United Arab Emirates wanted to use the Pope’s visit to improve its global image, which has recently been damaged due to many reasons. In order to contribute to its global image, UAE officials and media tools emphasized how tolerant the UAE is and how it works for peace and understanding among different beliefs. 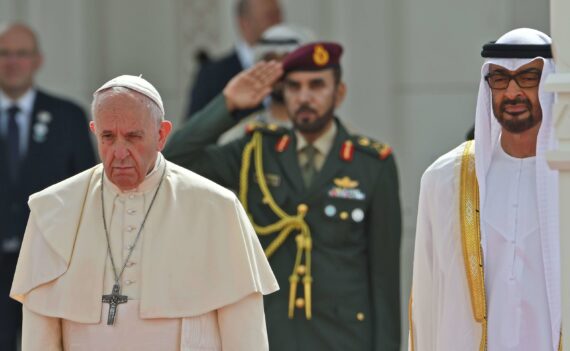 Pope Francis, the spiritual leader of the Catholic world, paid a historical visit to the United Arab Emirates. During the visit, the Pope led a sermon, which saw the participation of over 120 thousand Catholics living in the UAE. The Pope also met with the UAE leadership and representatives of other religions. One of the most symbolic pictures of this visit was the Pope’s close interaction with the Sheikh of Al Azhar, Ahmad Al-Tayyeb. This picture was meant to give the message of tolerance to the world, which the UAE claims to be the cradle of. In fact, the concept of tolerance was the main theme behind the visit. The UAE regime declared 2019 as the year of tolerance and the Ministry of Tolerance was established days before the Pope’s visit. UAE-based newspapers and agencies claimed that the Pope’s visit confirmed the UAE as the centre of tolerance.

However, experts and human rights advocates who follow the region closely have emphasized that the visit had different purposes than was claimed. The UAE administration, which has been responsible for human rights violations both inside and outside the country, has been allegedly in an effort to create a positive image of itself through different global PR activities. The Pope’s visit was just one of these. This was described in detail in a letter sent to the Pope on 3 February by Sarah Leah Whitson, director of the Middle East and North Africa division at Human Rights Watch.

The UAE administration, responsible for human rights violations both inside and outside the country, has been in an effort to create a positive image of itself through different global PR activities. The Pope’s visit was just one of these.

Whitson stressed that the UAE administration’s efforts to present itself as a tolerant regime is unacceptable as Abu Dhabi has increasingly become a regime that does not respect basic human rights. For instance, the UAE administration issued a new law in 2014 that made it possible to arrest opposition figures within the country. As a result of this, many human rights activists were unjustly arrested. A prominent academic and activist, Nassar bin Ghait, was arrested in 2015 and was given 10 years in prison. Another human rights activist, Ahmad Mansour, was recently sentenced to 10 years in prison after being detained in 2017.

Whitson also stated that the country must adopt new laws in order to democratize its stance on basic human rights, such as the freedom of expression and belief. It is argued that non-Muslims in the UAE have been experiencing difficulties in practicing their religious rituals. While positive steps have been taken in recent years, there are still legal obstacles that need to be tackled. Another human rights issue with regards to foreigners are the hard working conditions and discriminatory practices that workers have been experiencing.

In a letter to the Pope, Sarah Leah Whitson, director of the Middle East and North Africa division at Human Rights Watch, stressed that the UAE administration’s efforts to present itself as a tolerant regime is unacceptable.

Another motivation for the UAE to host the Pope in the country can be described as winning the loyalty of millions of Catholics living and working in difficult conditions. It is no coincidence that the main theme of the Pope’s speech was how Christians could preserve their religion under pressure and in difficult times. Therefore, Pope Francis’ message was that it is a religious duty to both work under hard conditions and to preserve religious identity. Such a message would serve to cover the UAE’s responsibility for any wrongdoing against the Christian workers in the country. On the other hand, those Christians would remember the Pope’s visit as a symbol of Abu Dhabi’s respect for them as a religious minority and their rights.

The UAE has also been criticized for its aggressive foreign policy in the recent years. Critics such as the United Nations, Amnesty International, and Human Rights Watch, have particularly raised their voice against the UAE for its role in the humanitarian catastrophe in Yemen. It is argued that the UAE has been the main actor responsible for the deteriorating situation in Yemen. Human rights advocates called the UAE to stop its aggression in Yemen immediately.

The UAE also played a significant role in the military coup that occurred in Egypt on 3 July, 2013. Abu Dhabi supported General Abdel Fattah Al-Sisi to topple the democratically elected president of Egypt, Mohammad Morsi. This was a turning point in Egypt’s aspirations to become a democratic country, as the coup undeniably aimed to reverse this process. The UAE continued its support for the military regime in Egypt, which has become one of the most autocratic regimes in the world.

Another controversial initiative of the Pope’s visit was the Human Fraternity Document, which was signed by Pope Francis and Sheikh Ahmed al-Tayyeb. By including concepts such as tolerance, understanding and justice, the document called for religious leaders to work together in order to prevent violence and radicalism. It was argued that while remaining silent to human rights abuses and imprisonment of thousands of civilians in Egypt, Al-Tayyeb would not be in the position to sign such a document as the representative of Muslims across the world.

The United Arab Emirates wanted to use the Pope’s visit to improve its global image, which has recently been damaged due to many reasons. In order to contribute to its global image, UAE officials and media tools emphasized how tolerant the UAE is and how it works for peace and understanding among different beliefs. The Pope on the other hand, sought to emphasize the role of the Catholic Church in protecting the rights of Christians in the Middle East and the Arab world.

Also Read
Why the Gulf Crisis is Here to Stay