Portrait of a French Sufi on the Night of Reunion (Şeb-i Arus): Eva de Vitray Meyerovitch

Eva de Vitray Meyerovitch died in Paris in 1999, at the age of 100. She told her friends in her last will: “Bury me in Konya when I’m dead, so that I can be in his [Rumi’s] spiritual presence.” While his last will was delayed due to her children’s opposition, it was fulfilled finally during the anniversary of Şeb-i Arus in 2008. Her body was interned in the Üçler Cemetery in Konya, near Rumi’s resting place, after being transported from the Thiais Cemetery in Paris. 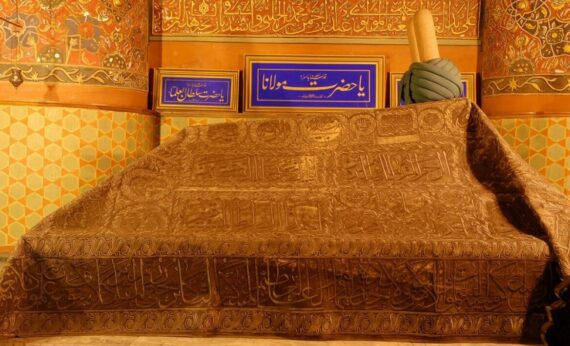 A person can have insight for where and when our choices will lead them in their lives by looking at the story of anyone and everyone; in our case, by looking at the story of Eva de Vitray. Nothing is impossible or coincidental in our lives.Eva de Vitray Meyerovitch was born to an aristocratic Catholic family. She was the wife of a Jewish man, mother of two, and the granddaughter of a devout Anglican woman who said, “always be honest and honorable, never cheat”. She studied law and did her PhD on symbology in Plato’s thought. She studied psychiatry for three years to understand the distinction between normal symbols and pathological symbols. While she was not a physicist, she worked as a director at the laboratory of Frederic Joliot-Curie, who was awarded with a Nobel Prize in 1925 for discovering radioactivity, before WWII. She truly loved to learn new things; she defined senility as “believing that you could never learn Chinese”.

Eva de Vitray Meyerovitch was the granddaughter of a devout Anglican woman who said, “always be honest and honorable, never cheat”.

Since the age of fifteen or sixteen, she was in conflict with the belief of the Holy Trinity; she was reading books on it, while asking questions from every priest she encountered. While she was listening to a priest, who had previously expressed to her that he didn’t believe Jesus Christ’s flesh and blood turned into bread and wine during the Communion, she thought to herself: “If I were a priest who didn’t believe in the Eucharist, I would’ve preferred to jump down a roof, instead of holding a mass.” She said that once a priest told her the following: “Who really believes in the existence of Purgatory, Hell or the Original Sin?” She was discomforted, as she believed that she was part of a grand scheme. “Do you really believe that one third of the world is wrong and only you know the truth?” she asked herself, in suspicion. Besides active efforts in her quest for the truth, she had a prayer she always repeated: “O Lord, please tell me what to do, show me a sign!”

“Seekers will be sought” say the Sufis. Nothing is impossible with love, and it is never coincidental

One day she was shown a sign; a sign, which she neglected for fifteen years: “I was put in a grave in my dream. On my tombstone the Arabic version of my name, “Hawwa”, was written. When I was awake, I remembered I was told that this was the sign I had asked for, and I was to be buried as a Muslim woman.”

She was suspicious of this dream; however, she maintained her modesty. She recalled how Frederic Joliot-Curie would occasionally pull her chains: “Oh, you poor people of letters! I can read Shakespeare as well as you can; however, you are not able comprehend differential calculus as I do.” She would always bow her head and say “You are terribly right, sir.”

During the invasion of France in WWII, while she was alone with her three-year-old child in her house, the Gestapo knocked on the door of her house around 3 AM. They asked where her husband was, who at the time was with the Resistance. She thought to herself “Maybe they will take me away, maybe I will be forced to name resistance members.” She didn’t have a false sense of bravado, using assertive phrases like “I would never!” Probably, for this reason, she experienced a miracle, as she puts it: “I said to them that I didn’t know where my husband was or with which slut. I knew some German from reading Kant and Hegel. However, when I heard my own voice, I was shocked as I was talking with a vulgar Berliner accent. I had never talked with such an accent. The Gestapo said ‘she has nothing to hide’ and left.” She witnessed many cruelties during the war. After seeing a German division rounding up 642 people comprised of mostly women and children, boarding them into the church and then burning them alive, she said “I was thirsty for the Absolute and was really unrestful.”

Then, an Indian friend of her, who she had learned Sanskrit with and was a disciple of Einstein, came to visit her and gave her a book by Muhammad Iqbal. “I realized that a singular truth was being mentioned in the book. Moreover, I read much of a person called Rumi and felt affection towards him,” she said.

Eva de Vitray was overwhelmed when she read a quote of Rumi mentioned in the book: “Even the minuscule movement of a person on the Earth is recorded by solar systems within undiscovered galaxies.” She pinched herself to see whether this was a dream. Remembering the words of a physicist friend of hers, “Einstein says that when you touch a cup, this movement is perceived by other solar systems”, she was affected tremendously as Rumi’s quotation dated back to the 13th Century. For this reason, Muslim scholars believe that even the seemingly smallest deed or sin of a Muslim shouldn’t be underestimated.

She went to the National Library of France at that time to find materials related to her much beloved Rumi, only to find a six page long German text and not a single page in French. Then, she decided to learn Persian to read Rumi. After three years of education in the Persian language, she started to read the Masnavi and translated the book into French after working on it for fifteen years. She then continued with reading and translating Rumi’s Fihi Ma Fih, Rubayat, Diwan-e Kabir and other Islamic works.

Before becoming a Muslim, while she was almost certain that she had found what she sought for many years, she went to a pontiff as a result of one of her friends’ suggestions. “Honestly, you cannot stay Catholic,” the pontiff said. “You say your grandmother was an Anglican. You should choose to become a Protestant, as it would shake you less than becoming a Muslim.” Eva de Vitray questioned this idea: “Why would it be better to choose Protestantism? Religion isn’t about cherry-picking the principles that suit you.”

She expressed the peace she had found after becoming a Muslim by uttering the Shahada (There is no god but God and Muhammad is his messenger). “The word Islam derives from the verb of surrendering yourself to the will of God. It also contains the meaning of peace. Therefore, Islam is the ability to know the particularities, which ties oneself to God right from one’s birth. Islam recognizes Christianity and Judaism as the predecessors of the true religions and accepts their messengers as prophets. When I became a Muslim, I felt like I have left all the theological nonsense of Christianity, pardon my language. I was allowed to continue to believe in Jesus and Mary.”

In the Holy Quran and hadiths, it is said, “people who choose to believe in God with the little knowledge they possess are taught of the rest”. Eva de Vitray tells her experience with this subject: “Even right at the beginning, I had a feeling that I knew Islamic tradition, while no one had taught me. For instance, you should not throw away a paper, which has God’s name on it. You can only burn the paper, if it is absolutely necessary. I have been doing this, even before I have learned this tradition.”

One day, she had an experience, which reminded her of the dream she had 15 years earlier. She went to Istanbul at the invitation of an architect friend of hers to observe the restoration of a Mevlevi lodge, which was transformed into a museum in 1925, as they were banned. While trying to walk on the street, which was crowded with construction materials, she stumbled upon a tombstone. It was the tombstone in her dream. “Only the name Hawwa wasn’t present on the tombstone,” she said, and asked the architect whose tombstone it was. “A female disciple of Rumi,” answered the architect.

According to the testimonies of her friends, Eva de Vitray always talked about Masnavi even while she was knitting or cooking.

Working on Platonic symbols, she had spent much time with the concept of recollection. She believed that this was providence, as this prepared her for Islam. “Discovering Islam was like finding what I have lost and reuniting with a person who I was separated with. As the spirit was created before the body, the spirit can remember the past. Therefore, people’s spirituality is shaped according to the extent they remember the spiritual world. Just like the peacock story of Suhrawardi… We are like the peacock; a heavenly music can make our heart thump.” She continues with another example: “We are like the Hannane treet in the Madinah Mosque, as Rumi tells in his Masnavi. Prophet Muhammad used to preach to the Muslims while he leant back on this tree. One day, a pulpit was placed within the mosque. Seeing the pulpit, the Hannane tree started to cry. The Prophet Muhammad embraced the tree and asked why the tree was crying. The tree said, “My soul is shattered as I was separated from you.”

According to the testimonies of her friends, Eva de Vitray always talked about Masnavi even while she was knitting or cooking. After becoming a Muslim, she went to a Qadiri sheikh and became a disciple. She explained what being a sheikh meant: “As God desires people to be merciful and full of love, God uses these people as conduits to reveal himself. Sheiks are like midwifes who help the people to give birth to their utmost potential.”

Eva de Vitray Meyerovitch died in Paris in 1999, at the age of 100. She told her friends in her last will: “Bury me in Konya when I’m dead, so that I can be in his [Rumi’s] spiritual presence.” While his last will was delayed due to her children’s opposition, it was fulfilled finally during the anniversary of Şeb-i Arus in 2008. Her body was interned in the Üçler Cemetery in Konya, near Rumi’s resting place, after being transported from the Thiais Cemetery in Paris.

Note: The biographical information about Eva de Vitray Meyerovitch was taken from the books İslam L’autre Visage written by the journalist couple Rachel and Jean Pierre Cartie, and La Priere en İslam, both of which were edited by Albin Michel. Moreover, I benefitted from various written testimonies on Eva de Vitray Meyerovitch and an interview I conducted with one of her close friends. Even though I lived in a neighborhood close to where Eva de Vitray resided in Paris, I unfortunately didn’t have the chance to meet her personally.