Every cloud has a silver lining. While the social democratic lead government has not proved a recipe against the Islamophobic shift in Austrian politics, this could initially be much easier to achieve for the social democrats in opposition. 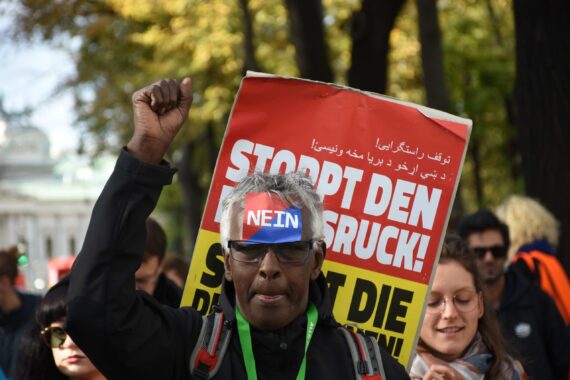 A man with a paper reading "No" on his forehead is seen during a protest against right wing extremists and racism ahead of the election that will be held on October 15, in Vienna, Austria on October 07, 2017. Anadolu Agency

Unsurprisingly, Austria’s national parliamentary elections ended up in a strong vote for the right. With a fulminant participation of 80 percent of the electorate, nearly 58 percent of Austrian voters gave their vote to the center-right People’s Party (31 percent) or the right-wing populist Freedom Party (26 percent). Since the Social Democrats were the runners-up with only 26.7 percent of the vote, the two parties on the right will most probably form a coalition.

Despite the official results, the real winner of the election is the Freedom Party. Austria’s Freedom Party, which has its roots in the Austrian political third camp, represents the nationalists that were also the strongest supporters of the Nazis during Hitler’s years. The movement began in 1956, becoming a safe haven for former Nazis and economic liberals. With Jörg Haider becoming new chairman in 1986 and with the help of anti-elitist and racist campaigning, the party gradually transformed from a 5 percent to a 25 percent party. The Freedom Party focused on targeting people of Turkish, Ex-Yugoslavian, and African background, as its scapegoats for the political and cultural decline of Austrian society.

Following Haider’s departure from the Freedom Party in 2005, the new far-right leadership increasingly embraced Islamophobic discourse throughout their election campaigns. Since then, not only has Austria experienced aggressive slogans directed blatantly against Muslims, the leadership under Heinz-Christian Strache specialized in creating the Muslim enemy as the new target. While this discourse gradually became dominant and left its clout on the other political parties, the nominal centrist-right People’s Party, although less radical in its rhetoric, became inclined to adopt this new strategy.

It was this dynamic that led to moving on from ‘only’ talking-to-walking Islamophobia as the institutionalization of Islamophobia has since slowly taken hold. In 2008, debates about banning the building of mosques and minarets began in two out of nine counties across Austria. The ban was first implemented in Vorarlberg, a county governed by the People’s Party, followed by Carinthia, which was governed by the Freedom Party. During the four coalition governments of Social Democrats and the People’s Party from 2007 to 2017, Islamophobia slowly but surely became a relevant dimension.

The Social Democratic party is facing a programmatic dilemma between showing internationalist solidarity with the marginalized, immigrants, and the working poor, and in protecting Austrian workers as a traditional labor party. Regarding Muslims, the party’s dilemma arises between its anti-racist agenda on one side and its secularist anti-religion agenda on the other. Meanwhile, the People’s Party is also in a dilemma in regards to its treatment against Muslims; while on the one hand they proclaimed that Islam was part of Austria, thus creating a positive outlook, on the other hand, the party positioned itself on a hardline in regards to controlling transgressions of Muslims. This ambivalent – while for many in the People’s Party’s rank and file functionaries quite balanced – strategy lasted until recently when the People’s Party started co-opting the right-wing populist party’s Islamophobic claims.

In 2015, the new Islam Act, which had intended to amend the 1912 Islam Act dating back to the comparably tolerant incorporation of Islam in the Austrian political system, was implemented. It was widely criticized by many legal scholars as creating a two-class system for religious groups as Muslims here were put under general suspicion, their ties to the Muslim world was financially cut, and their institutions were put under tough state control like no other church or religious denomination. It seems that the Austrian Muslim’s honey moon ended here. Forgotten were the times when Austria’s Muslim leaders and government officials were praising the ‘Austrian model’ of incorporating Islam and leveling it on an equal footage with other churches and denominations.

The Islamophobic turn was further solidified by implementing a full-face veil ban Act as part of the new Integration Act in early 2017. The full-face veil was banned in public as part of the Integration Act. At the same time, both governing parties, the Social Democrats and the People’s Party, argued that they would not include a ban of the Hijab for attorneys, court lawyers and police women, since a general dress code for these professions would already allow a ban of the Hijab. Obviously, this seems to have been done in order to circumvent the EU regulation on Anti-Discrimination. Nevertheless, this move showed how much both centrist parties had shifted to the far right and this is why the real winner of the recent elections is the Freedom Party. Although not in power, the Freedom Party had been able to push and implement its agenda while in opposition. During the recent election campaign, the People’s Party was identified to co-opt the law-and-order approach of the Freedom Party. This was especially true regarding issues such as migration and Islam.

However, every cloud has a silver lining. While the social democratic lead government has not proved a recipe against the Islamophobic shift in Austrian politics, this could initially be much easier to achieve for the social democrats in opposition. Although they only became second, their leader Christian Kern seems to not arise as a weak loser from this defeat, but rather as a leader for upcoming opposition years. Hence, he was reconfirmed this Monday by the national party’s board as party leader. Some observers had predicted for the social democrats to even only become third.  While it is highly unlikely that Austrian Muslims will form any alliance or affiliation with the People’s Party or the Freedom Party, if the Social Democrats strengthen their anti-racist camp, not only will they gain a new alliance but will earn the Muslim vote in the next general election. 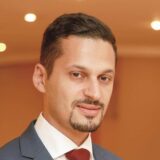