"Who are the winners of weapon orders given by Islamic countries from the West? Who benefits if brothers turning themselves to the same direction to pray five times a day become enemies?" 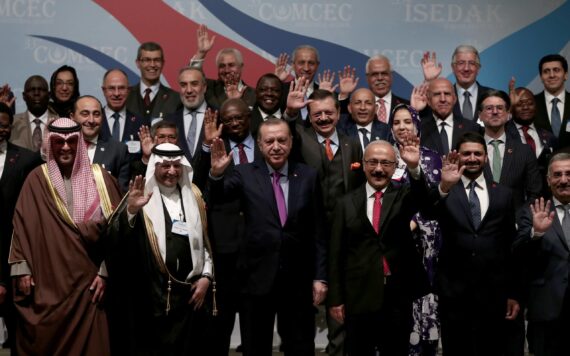 Turkish President Recep Tayyip Erdogan (C) and other participants pose for a family photo after the 33rd session of the OIC Standing Committee on Economic and Commercial Cooperation in Istanbul, Turkey on November 22, 2017. Anadolu Agency

In the opening speech of the 33rd Ministerial meeting of COMCEC at Istanbul Congress Center (ICC), Erdogan said: “We have to focus our attention on projects for boosting trade among us,” and urged Muslim countries to favor a preferential system of trade.”

“To improve economic and commercial cooperation among us is essential to offer our people a prosperous life as they deserve,” he said. “So, we have to find ways to use programs such as the Organization of Islamic Cooperation and COMCEC in more efficient ways.”

“Our duty is to transform the Islamic geography into an important production basin with measures aimed at boosting economic, technological and cultural progress. We have to form a model for it,” he added.

Considering the opportunities brought by the important population of the Muslim world and its underground resources, Erdogan said: “Our main concern is to use these riches.”

“We have to implement the decisions that we make here. The ideas that do not turn into reality are condemned to be a pleasant promise. These meetings should have a meaning. Only this way we will find way to solve ummah’s problems,” Turkish President Erdogan said.

President Erdogan said “Killers such as Deash, Al-Qaeda, Boko Haram, YPG and FETO have transformed our region into a bloodbath. But we should keep the real screenwriters in mind. This is a scenario implemented to destroy the unity of the Islamic world.”

“The western world built themselves a welfare regime over the blood of the oppressed three centuries ago. The West endeavors to extend its life over their resources of the oppressed. Of course, the target here is not just oil. It’s not just underground and over-riches that are plundered. The main goal is to dry the life springs of the Islamic civilization. Because Muslims have succeeded in sustaining their claims globally despite the many attacks they have experienced,” Erdogan said.

“Who are the winners of weapon orders given by Islamic countries from the West? Who benefits if brothers turning themselves to the same direction to pray five times a day become enemies? I believe that if we give answers to these questions we will perceive the issues differently. Muslims cannot accept the role given to them without questioning. It is already clear who formed, fed and raised these herds of killers. We cannot stand by while they become instruments of Islam-hate. It is the intention of all Muslims to be put under the command of terrorist organizations through their actions and to seize even the most basic rights on this pretext. On the other hand, of course, in order to assert this, we also have to have necessary opportunities. Muslims actually have great opportunities. The real issue is to evaluate it properly.”

The COMCEC aims to improve economic and commercial relations among member countries. It is the highest ministerial platform for the Organization of the Islamic Cooperation (OIC) – the second largest inter-governmental organization after the UN.