Speaking to France 24 on Monday, Presidential Spokesman Ibrahim Kalin made important statements about recent developments concerning Turkey, including NATO’s military exercise, the Reza Zarrab case and relations between Turkey and the US. 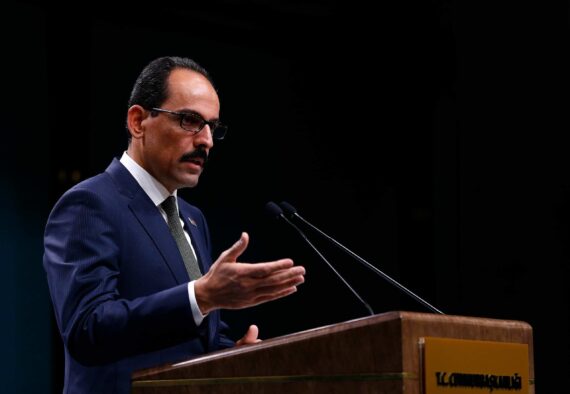 Speaking to France 24 on Monday, Presidential Spokesman Ibrahim Kalin made important statements about recent developments concerning Turkey, including NATO’s military exercise, the Reza Zarrab case and relations between Turkey and the US.

Presidential Spokesman Kalın emphasized that the use of pictures of the Turkish Republic’s founder Mustafa Kemal Atatürk and current President Recep Tayyip Erdogan during a NATO exercise in Norway in the “enemy chart” should be investigated carefully.

“This is one incident, but of course we are a strong ally in NATO and we participated in many exercises.” Kalın said after underlining that Turkey’s relations with the NATO dates back to the 1950s.

A civilian Norwegian official depicted President Erdogan as an “enemy collaborator.” During the computer-assisted exercise of the drill Turkey’s founding father Atatürk was shown in the list of “hostile leaders.” Turkey had immediately withdrawn its troops after the incident on Friday.

“Of course, this incident has to be studied, investigated very, very carefully — who did it, who put those pictures in there, etc.,” Kalin said and also stated that it is impossible to expect Turkey not to react to this event.

While Turkey had received an official apology, questions still remain as to how and why such an incident could occur in an organization such as NATO.

“Well I don’t know the details. We will see. We’ve relied on NATO’s explanations so far, and I think there will be an investigation, and we heard a couple of people have been fired. But we seek to know how such a thing can happen within NATO so such thing won’t happen again,” Kalin said responding to a question on whether it was an accident or not.

To the question whether Turkey is considering severing ties with NATO Kalın responded that Turkey is not thinking of making such a step.

Kalın underscored that the 2 main points that are crucial for Turkey are still waiting to be solved since the times when former US President Obama was in office. The first is in regards to the US support for the PKK/PYD in Syria and second, the extradition of Fetullah Gülen, the criminal cult leader of the terrorist organization FETO, who is behind the coup attempt on the July 15 in 2016 which lead to the death of more than 250 people.

He claimed that FETO is “using the US system to launch an attack against Turkey through the Zarrab case or Halkbank case, which is one of the public banks in Turkey.”

Zarrab, who was arrested last year on alleged fraud and Iran sanctions-related charges, has been in jail in the U.S. pending trial.

“Now, we have never asked for something that is outside the legal framework. We asked for his [FETO leader Fetullah Gulen’s] extradition to Turkey based on a treaty of extradition of criminals that the U.S. signed in the 1960s,” he said.

When asked if Turkey still has hope on this issue, Kalin emphasized that the US attitude is “having a negative impact on our bilateral relationship too. Because if you allow such a group of people in your country functioning against a key ally, how are we supposed to respond to that?”

“This whole thing is a very politically motivated case. We are depending on energy from outside. We had to do trade with Iran during the sanctions. We said we will have to try some other means to do it. Our banks were involved, our economy ministry was involved… Americans know all of this,” Kalın claimed.

PKK/PYD relations with the US

Kalin also repeated the concerns of Turkey on the US relationship with PYD and the recent PKK/PYD’s deal with Daesh, which allowed Daesh terrorists and their families to flee the city of Raqqa, Syria.

Calling it a “terrible deal,” Kalin stated that it is a fallacy and contradicting move to support one terrorist group against another.

He said Turkey now is “expecting the US to disengage from the PKK/PYD because the mission has been accomplished. And we will see how they [the US] devises their plans now”.

“Now the question is this: they have said all along that the [PKK/PYD] is the most effective force against Daesh. Well, it is actually the other way around,” he added.

He said that if the US provided that kind of support to any other group such as the Free Syrian Army or Turkmen or another Arab group, they would have been the most effective group against Daesh.

The PYD and its military wing YPG are Syrian branches of the PKK, which waged war against Turkey for more than 30 years.

Since the PKK launched its terror campaign in Turkey in 1984, tens of thousands of people have been killed, including more than 1,200 since July 2015 alone.

The US and the coalition have largely ignored the PYD/YPG links to the PKK, which the US, EU, and Turkey list as a terrorist organization.