While the government have been salient in ensuring a peaceful relationship with Germany is maintained, acknowledging that the elections climate has given rise to tensions, in response to the PKK rally in Cologne, Turkey summoned the German ambassador to Ankara. 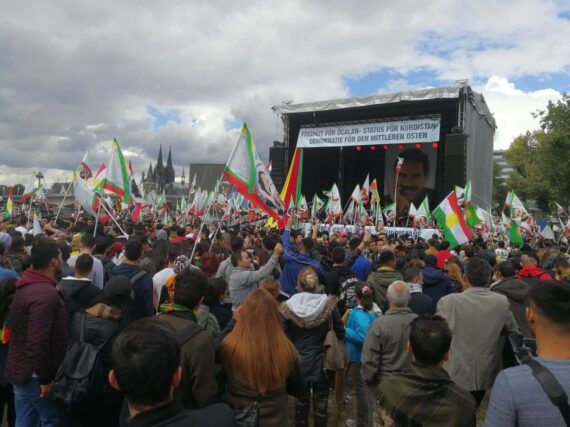 The PKK rally in Cologne, Germany, on September 16 raised questions once again on Germany’s democratic standards and commitment to bilateral relations with Turkey.

The PKK, listed as a terrorist organization by the US and by the European Union, resumed its armed campaign in July 2015 regardless of government efforts to sit around a table and negotiate solutions. Since resuming its armed campaign, the PKK have been responsible for the deaths of some 1,200 Turkish security personnel and civilians, including a number of women and children.

The rally in Cologne saw a mass number of PKK members and sympathizers gather, chanting hatred against the Turkish President and freedom for the leader of the terrorist organization, Abdullah Ocalan.

While German federal elections are on the brink, and since an anti-Turkey political atmosphere has been evolved during political campaigns, allowing the PKK to hold a rally during this time has only served to deteriorate relations further. During the election campaigns German politicians including Merkel and Schulz called for the re-negotiations of Turkey’s membership bid to the EU.

While the government have been salient in ensuring a peaceful relationship with Germany is maintained, acknowledging that the elections climate has given rise to tensions, in response to the PKK rally in Cologne, Turkey summoned the German ambassador to Ankara.

In a statement published, the Foreign Affairs Ministry stated: “We condemn the organization of a rally in the German city of Cologne by the extensions of the PKK terrorist organizations, and the allowing of terror propaganda. We have voiced our reaction in a strong manner to Germany’s ambassador to Ankara, who was called to the ministry.”

Turkey’s fight against the PKK

The Turkish state have continued with their counter-terrorism policies and have, according to the Interior Ministry, neutralized 46 PKK terrorists in the past week.

In a statement detailing operations held between Sept. 11 and Monday, the ministry said: “During the operations, a total of 29 terrorists were killed; 11 of them surrendered while six others were captured alive.”