Protests in Support of Rohingya Muslims all over the World

Following increasing violence against Rohingya Muslims in Rakhine state, rallies have emerged across the world in protest of the humanitarian catastrophe. 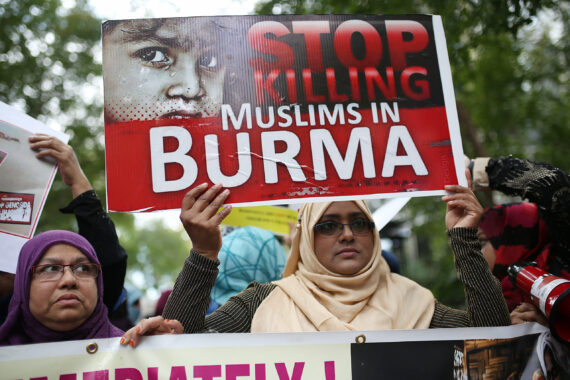 Muslim Americans protest after performing Friday prayer in front of the United Nations to protest Myanmar's oppression towards Rohingya Muslims in Myanmar’s Rakhine state, next to the United Nations in New York, United States on September 15, 2017. Source: Anadolu Agency

While the UN has described the Rohingya as the most executed peoples, increasing support from all over the world has raised political awareness of the crimes taking place.

Following the flee of approximately 300,000 Rohingya to Bangladesh, demonstrations took place in London, India, Chechnya, Indonesia and other countries in Asia, with the hope of increasing pressure on Daw Aung San Suu Kyi, the de-facto leader of Myanmar.

Apart from mass protests and rallies over Asia and Europe, prominent individuals have also spoken against the perpetuated violence, calling for a diplomatic resolution. Education activist Malala Yousafzai has called for Suu Kyi, a Nobel Peace recipient, to use her position to “stop the violence.”

Regardless of increasing international pressure however, the de-facto leader of Myanmar has cancelled plans to attend the UN General Assembly in which the Rohingya crisis is going to be discussed.