Pulling Out of the Nuclear Deal: Towards a New Status Quo with Iran?

Reversing the deal may well result in catastrophe but it will more likely lead to a tit-for-tat in the region where the administration will be able to claim that it is rolling back Iran. That may prove to be the new status quo. 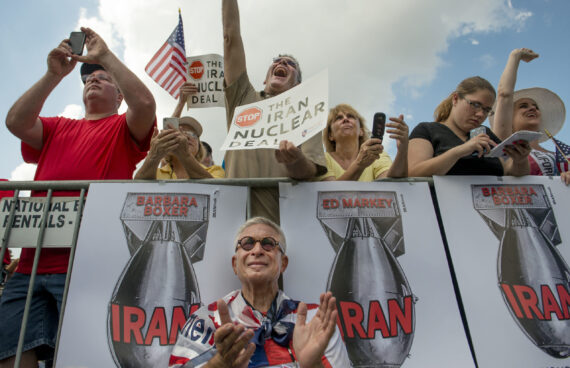 Gene Shusman from Phildelphia (bottom) gets a front row seat at a the Stop The Iran Nuclear Deal protest in front of the U.S. Capitol in Washington, DC on September 9, 2015. Getty Images

President Trump is widely expected to walk away from the Iran nuclear deal by refusing to issue a sanctions waiver this week. One of Trump’s central attacks on the Obama administration has been the Joint Comprehensive Plan of Action (JCPOA) itself on grounds that it gave Iran billions of dollars that failed to prevent Iran from going down the nuclear path. Undoing the most important foreign policy piece of the Obama legacy is obviously irresistible for President Trump, who has had to begrudgingly certify that Iran was in compliance with the agreement. The President’s strong critique of the nuclear deal is now coupled with the Israeli Prime Minister Netanyahu’s “intelligence coup” last week that seems to give Trump further political cover, though it is doubtful he really needed it. Should the President pull the U.S. out of the nuclear deal, it is unclear what will replace it, and perhaps more importantly, what U.S. policy towards Iran will be.

Candidate Obama had made the headlines when he suggested he would talk to Iran without preconditions in the 2008 presidential campaign. He sought a nuclear agreement with Iran that would ultimately lead to a historic rapprochement with the U.S. Obama suggested that Iran had a rightful place in the region and would need to “share” the region with Saudi Arabia among others, signaling the regional accommodation of Iran.

Although the Obama administration constantly argued that they were focused only on the nuclear deal, it was clear to everyone that it would have broader strategic and political implications. Nevertheless, Obama insisted on the narrow focus of the nuclear deal in an effort to avoid confronting Iran in the region, which could ultimately jeopardize the deal. The regional accommodation in return for the nuke deal policy has been partly responsible for the expansion of Iran’s strategic influence in the region. At the same time, the deal arguably prevented a potential military operation against Iran’s nuclear facilities, which could have led to a regional confrontation.

President Trump has repeatedly attacked the Iran deal as an “insane” one and suggested its renegotiation but the outlines of a new approach are missing. The Obama administration had spent months to bring Europeans, Russia and China on board for imposing sanctions on Iran but the Trump administration has so far contended itself with strong rhetorical attacks on the deal without providing a roadmap or explaining its goals. Trump has indicated he might be open to a “better deal” under pressure from European allies but there is no serious diplomatic effort to build a front against Iran. Undermining the deal seems to be the sole focus at the moment. Ripping up the nuclear deal may not lead to an immediate military confrontation given President Trump’s non-interventionist streak despite his harsh rhetoric and threats.

The U.S. pullout of the nuclear deal will certainly introduce tensions into a region that is already a sea of uncertainty and unpredictability. Trump’s domestic agenda’s nationalist and isolationist tendency would probably preclude a regime change policy toward Iran. Trump is unlikely to seek regime change and will be unwilling to push back against the Iran militarily to avoid yet another costly war in the region. The president may contend himself with undoing the nuclear deal without replacing it with another deal or another comprehensive Iran policy.

A new Iran policy would need to have a theory of the case addressing Iran’s regional role and its relations with the U.S. Obama’s Iran policy saw a legitimate role for Iran in the region and used the nuke deal for a future normalization of ties. It is not clear if Trump has such a theory of the case and whether he wants to devise a new Iran policy beyond undoing the nuclear deal. Reversing the deal may well result in catastrophe but it will more likely lead to a tit-for-tat in the region where the administration will be able to claim that it is rolling back Iran. That may prove to be the new status quo.