Isho Hanna and Elias Hanna, both aged 19, were on their way to university in Haskah when the Asayesh kidnapped them. Their whereabouts are still unknown. 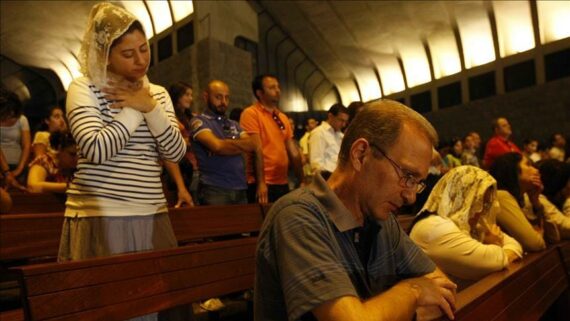 According to the World Council of Arameans (WCA), Christians in Syria are facing more and more oppression from the YPG and the so-called security forces “Asayesh.”

On 19 January, 7 Christians, 4 Armenians and 3 Arameans (also known as Syriacs), were abducted by the terrorist group and forced to the front lines in Afrin, Syria, where the Turkish Armed Forces are currently conducting Operation Olive Branch.

The WCA informed that while following intense negotiations, all of them were released, 20-year-old Aramean Saliba A., who was kidnapped in broad daylight, still remains in the hands of the group.

Saliba was first held near Qamishli – a northeastern Syrian city near the border with Turkey – where the PYD/PKK has a base, but his current condition and location is unknown.

According to reports by the Anadolu Agency, a friend of Saliba stated that: “Everyday they kept telling us that he will be released soon. Then they said tonight, then they said tomorrow morning. After 10 days, we stopped believing their empty promises and are concerned about Saliba’s well-being.”

The Asayesh, a so-called security force operating in areas controlled by the YPG tell the local minority groups that those who have been kidnapped are handed over the to YPG. However, locals claim that the YPG tells them to contact the Asayesh.

“They’re playing games with us and trying to make us scared. They want us to abandon our homeland so that they can seize more of our properties and land.”

In addition to the case of Saliba A., the WCA reported that two more Christians were recently kidnapped.

Isho Hanna and Elias Hanna, both aged 19, were on their way to university in Haskah when the Asayesh kidnapped them. Their whereabouts are still unknown.

Teens are continuously being forced to the front lines by the terrorist organization.

According to a local anonymous source, this happens because “these people [Asayesh] consider themselves the new rulers of our region.”

Johny Messo, head of the WCA, strongly condemned the on-going terror campaign by the PYD/PKK terrorists.

“Our people on the ground keep telling us about all sorts of human rights violations, including the confiscation of land, intimidations, threats and a rising wave of kidnappings. This must immediately end. We demand that the Kurdish YPG forces respect Syria’s native Arameans. We further call on the U.S. to make this critical message clear to the YPG.”