On Sunday 14 January, the PYD/PKK terrorist organization located in Syria targeted the residential area in Azaz with multiple rocket attacks from the Afrin district bordering Turkey. 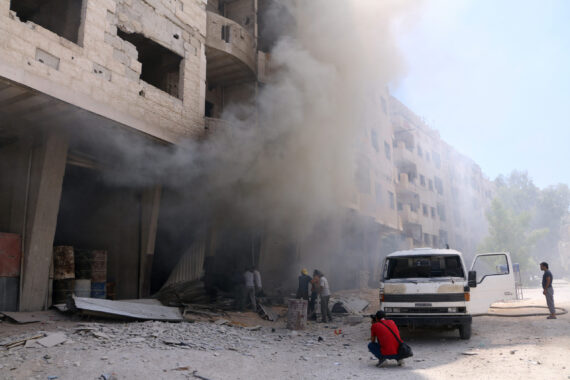 On Sunday 14 January, the PYD/PKK terrorist organization located in Syria targeted the residential area in Azaz with multiple rocket attacks from the Afrin district bordering Turkey.

According to reports, a large number of rockets were fired by the terrorist organization on the civilian settlements in the area controlled by the Turkey-backed Free Syrian Army forces.

While no casualties were reported, the attacks inevitably caused material damage.

Turkish Armed Forces stationed in the Euphrates Shield Operation area in Syria and in the de-escalation zones in Idlib retaliated with artillery fire targeting the terrorist group in Afrin.

The PYD/PKK terrorists have been attacking civilians in Azaz from time to time since the city was liberated by the Turkey-backed Euphrates Shield forces last year.

While the PKK is acknowledged and accepted as a terrorist organization by not only Turkey, the EU and the United States, the Trump administration (and previous U.S. administrations) continue to provide military and financial assistance to its Syrian offshoot – the PYD.