Europeans need to come to their senses and think again. Just because the PKK or the DHKP-C are secularists, does not mean they can be tolerated. They kidnap children, they train and send suicide bombers to cities, they do not want to lay down arms and get into politics, they continue making money over drug trafficking. 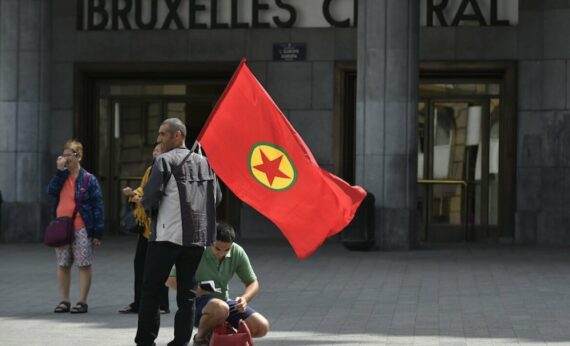 After years of reporting in Turkey, I moved to the heart of Europe in October. In this past three months, I had the opportunity to directly witness the freedom PKK members and their supporters enjoy here in Belgium, especially at the European institutions in Brussels.

Middle EastBy Politics Today
I will not be talking about how the terror group manages its finance in Europe, or erects propaganda tents outside the European Union (EU) headquarters, or displays photographs of PKK terrorists at an exhibition at the European Parliament (EP). I will instead only discuss what had happened in the past months and the reactions I received for my questions on the PKK.It is no secret that the rise of the xenophobic far-right in Europe has also effected the EU’s relations with Turkey, by far the largest Muslim candidate country. Some may have valid criticisms to raise against Ankara but most of these turned into a bashing-campaign by major European political parties who looked to gain more public support. They however seem to forget the psychology at play, and that these criticisms bolster xenophobic and racist ideas among the public. At this point, it is important to say that the direct or indirect support that the PKK receives is also related to these developments in Europe.Recently a federal court in Belgium ruled that the activities of the PKK cannot be classified as terrorism, and rather fall under the definition of an “armed campaign.” The suspects are accused of kidnapping children from their families in Belgium and other “Western countries” and sending them for training in Greece and Iraq. They are also accused of forging documents and extorting businessmen. The ruling came on the very same day when PKK terrorists carried out a bombing attack in the southeastern province of Diyarbakır, killing two police officers and six civilians. Since the PKK is listed as a terrorist organization by the EU, I tried reaching Belgian authorities to comment on how a domestic court can contradict EU laws but they declined to comment. An official from the Belgian Justice Ministry refused to comment, citing a separation of powers. But the very same person contradicted her own statement and referred me to the Prime Ministry to get a response on the issue. As expected, there was no response to my question.

When Turkish courts arrested some pro-PKK politicians of the Peoples’ Democratic Party (HDP), a group of PKK supporters took to the streets in Brussels and gathered in front of the European Parliament. I took my camera and went to the area to witness it myself, for the first time, how banners and flags of a listed terrorist organization were being waved before an institution that claims to advocate for democracy and fight against terrorism. When I arrived to the scene, I observed that some of the protesters were cautiously watching those passing near them. Thus, I decided to do live broadcasting via my mobile phone from a distance of some 10 meters. There were only two police officers in the area and they were sitting in their car quietly until I reached their door to ask if the crowd had permission to hold a demonstration. The officers opted to remain silent and took the advice of a PKK supporter who wanted me to stay at a far distance. Probably, my press card was not as worthy as the PKK flag the terror supporter had in his hands. It is worth noting that according to regulations, an online application is needed at least 10 days prior to a planned demonstration. However, this rule does not seem to apply for PKK supporters.

Several weeks passed and I started to better understand how things with the PKK work in Europe and this was pretty disturbing. The double standards on responding to terrorist organizations pushes the people of Turkey further away from Europe, and this is borne out in recent studies showing that up to 65 percent of the population does not think positively of the EU.

I realized that hundreds of questions and doubts raised by Turkish society and politicians do not get asked directly to European officials. When commenting on the PKK or Turkey, EU officials repeat the same words each time: “PKK is a terrorist organization for us.” However, their actions portray a different picture.

Two days after the PKK’s twin car-bomb attack in Istanbul killed 44 people and injured 155 on December 10, I went to a press conference at the European Commission (EC) and asked the deputy spokesperson a question that we are still unable to get an answer for. “We have recently witnessed France arresting people for browsing terrorism-linked content online. Following Saturday’s terrorist attack in Istanbul, there were dozens, or probably hundreds, of PKK supporters in Europe celebrating and glorifying the attack. Are we finally going to see Europe taking action against these people who celebrate a terrorist attack in an [EU] candidate country?” The spokesperson said these are questions the EU’s foreign policy chief Federica Mogherini would be happy to answer. However, I have still not been given the chance to raise the question.

I went on to remind the EC spokesperson that the EC’s Enlargement Commissioner Johannes Hahn had met with some pro-PKK figures. These included Faysal Sarıyıldız, an HDP deputy who is accused of supplying weapons to the PKK and entrapping security forces in a curfew held district, Tuba Hezer, who once shouldered the coffin of a PKK terrorist, and Eyüp Doru, a name with an Interpol red notice, who has been on active duty at the PKK’s Qandil headquarters for five years. “Is this the new approach towards enlargement of the EU or we are going to see steps against these terror-linked people?” I asked and questioned whether the EU is planning to enlarge with close relations with terror suspects or sit at a table with representatives from Ankara. Again, there was no answer.

The EU is not only allowing PKK propaganda at its institutions or staying silent over the PKK’s terror activities, it also demands Turkey soften its counter-terrorism laws to grant the country visa-free travel to the Schengen zone. In a sensitive time when the country fights against many branches of the PKK at home, in Syria and Iraq, European demands only further frustrate the people of Turkey. Since all the European countries have their own counter-terror laws, what exactly is it that the EU wants from Ankara? Turks are also curious whether if these European standards would allow the state to confiscate assets of terror suspects without a court verdict like here in Belgium, or if social media users will end up in jail for their supportive messages to terror groups, like we witness across many EU member states. If the answer is yes, there is not much to fuss about.

EU Council President Donald Tusk recently said that it was still difficult for Ankara to change its anti-terror laws. “I know that this is not a sign of a bad intention, but objectively they [Turkey] are in a very difficult situation,” he confessed.

The ordinary people in the street that I talk to have either very little knowledge about how the PKK ended the recent ceasefire, with an announcement on July 11, 2015 and the killing of two police officers while they were asleep in their beds on July 22, 2015. They are also unaware that so-called politicians use the terrorist organization for propaganda, even attending the commemoration ceremony of a suicide bomber. Thanks to the mainstream Western media, the biased portrayal of incidents has led PKK members sought with Interpol red-notices to carry on their propaganda at the EP.

On the other hand, the majority of the Turks in Belgium – including those of Kurdish origin who oppose the Marxist ideology of the PKK – are aware of the realities on the ground and they also seem to be losing trust in Belgium and Europe. A Turkish-Belgian man in his 60’s told me that he grew up here and some of his friends were “martyred” while digging metro tunnels in Brussels. “We have served and help to build this country for many years and we cannot understand why Belgium tolerates and supports this terrorist group.” Another question that flies into space.

Europeans need to come to their senses and think again. Just because the PKK or the DHKP-C are secularists, does not mean they can be tolerated. They kidnap children, they train and send suicide bombers to cities, they do not want to lay down arms and get into politics, they continue making money over drug trafficking. The list can continue and we may witness a time when Europeans regret their direct or indirect support to this poisonous group.

Mehmet Solmaz is the Brussels correspondent for Daily Sabah.